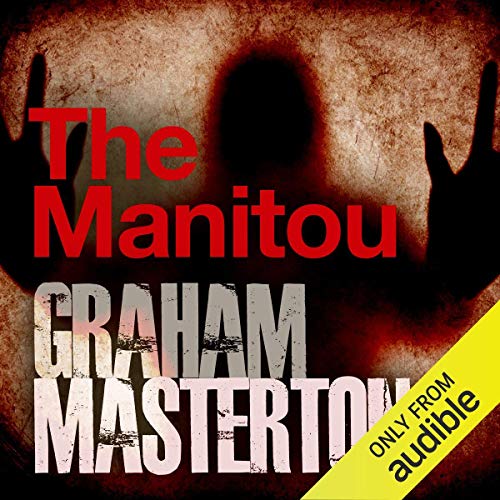 It only grows at night.

Karen Tandy was a sweet and unassuming girl until she discovered the mysterious lump growing underneath her skin. As the doctors and specialists puzzle over the growth, Karen's personality begins to change. The doctors decide to cut out the lump - but then it moves. Now a chain reaction has begun and everyone who comes in contact with Karen Tandy understands the very depths of terror. Her body and soul are being taken over by a black spirit over four centuries old. He is the remembrance of the evils the white man has bestowed on the Indian people, and the vengeance that has waited 400 years to surface. He is the Manitou.

Graham Masterton (born 16 January, 1946, in Edinburgh) is a British horror author. Originally editor of Mayfair and the British edition of Penthouse, Graham Masterton’s first novel, The Manitou, was released in 1976. This novel was adapted in 1978 for the film The Manitou. Further works garnered critical acclaim, including a Special Edgar award by the Mystery Writers of America for Charnel House and a Silver Medal by the West Coast Review of Books for Mirror. He is also the only non-French winner of the prestigious Prix Julia Verlanger for his novel Family Portrait, an imaginative reworking of the Oscar Wilde novel The Picture of Dorian Gray. Masterton was also the editor of Scare Care, a horror anthology published for the benefit of abused children in Europe and the USA.

The story was good, but long winded.

The story was a little two fantastical to actually be scary and a bit too long winded to grip me and hold my attention. The story was good, but left me feeling like I wish it was a lot shorter.

I had long heard of Graham Masterton’s The Manitou (I believe it was suggested somewhere along the way by Stephen King as a must-read, but don’t quote me on that) and thought it time to dive into this Native American mythology based tale and see what was what. I expected a romp through the Wild West with outlaws and desperados, saloons and wagon trains and cowboys and Indians. I was so wrong. Masterton sets his novel in late 1970’s New York (the book was published in ’76) and pits an ancient being against the constantly evolving technology of the time in an over-the-top horror novel like you have never seen. The book is swift and to the point- each new question leading to the next until the final climax. I’ll admit, there are times when it seems silly and outdated, but if you keep in mind the time when it was written, The Manitou is a highly enjoyable read/listen. Also if you love this story, there are sequels… #Dark #NativeAmerican #Horror #Tagsgiving #Sweepstakes

A MUST read/listen to this author!! Wonderful Amazing Fantastic!!! Will listen to more!!!!!!

Not Bad - a bit too tangled to be scary at all

Not bad, good story idea - but too unbelievable to be scary. To me, real scare starts with something that I can see happening and then makes me hesitate to turn off the lights…that’s the sweet spot. This book…..missed that.

But, it’s still an interesting story. The ending left me saying, “Hmmm.”