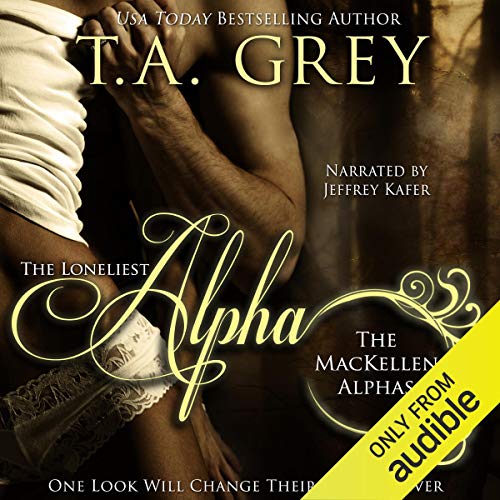 Lingerie designer Alicia Clarkson just had to open her stupid mouth. Now, thanks to trying to defend a fellow pack mate, Alicia's been blindfolded, tied up, and carted off to the new alpha of the Oregon pack - Gavin MacKellen.

However, the blindfold doesn't come off so soon as Gavin reveals he's searching for a mate. But Alicia's curiosity gets fired up when Gavin refuses to reveal his face to her. Just what happened to him? He talks to her from shadowy corners and behind closed doors. The man is as elusive as a squirrely fox. But Alicia doesn't play games and the quiet spoken, hoarse-voiced alpha doesn't stand a chance against her. They settle on an agreement, thirty days for them to get to know each other because that's the only way this cowboy alpha will have it.

Gavin MacKellen needs a mate. But he knows no good woman would ever want to look at his face after the incident he suffered. After one look at Alicia Clarkson, all his plans fly out the window. The woman's beauty has stunned him damn near speechless. She torments his thoughts and Gavin finds himself yearning to know everything about her. As a relationship forms and love threatens to grow between them, Gavin struggles to cope with his physical appearance in the face of the beautiful Alicia. Will she be the one to stand in the face of a monster and accept him or will she turn her back on him?

4.5 for sure, but not a typical shifter book

This was a very intricate story, lots of great characters, I would love to visit this world again....BUT....it is far from what I expected.

It seems to me that in a lot of shifter books you hear about pack unity, respect for the alpha, a real sense of pride in belonging to the pack, and total deference to the Alpha. This book shows a FAR different take on alpha life. There are several people in this pack that the Alpha can't stand, and they don't care too much for him either. One guy just flat out thinks he should be alpha and is constantly making the Alpha's life difficult...and yet he's still there. The Alpha works a normal job on pack land, and he doesn't live in a great house. Really it was a very weird alpha pack type book because it doesn't follow any of the normal conventions on what a pack is and there is almost no shifting...but it was a really nice story so I got over it.

Three months ago the Alpha of the pack died, a new leader was chosen called Gavin. Gavin put out an alert that said he was looking for a mate and packs far and wide sent their best choice for him to look at.

Alicia Clarkson sees a pack-mate being manhandled in the street and speaks out that the guards should release her, she doesn't want to go wherever they want to send her. The Alpha of her pack explains the girl is being sent off to be considered for an alphas mate and she should shut the heck up, she doesn't, he gets ticked and decides to send her too just to get her out of the pack.

When Gavin first sees Alicia he is struck dumb, she's fiery, fierce, determined, and quick to think on her feet...all the things he was looking for in a mate. It also didn't hurt that she was beautiful. He decides he wants her, but wants her to choose to be with him. The women in his pack can't stand to look at him, after the Alpha challenge, which he won, his face was horribly scared, most women look at him and run. He needs an outsider, and he needs to seduce her before she can see his face.

Great for credit/buy, maybe not a purchase, but I did enjoy it a lot.

Re read this several times

Great book and narration. Kept me in with all the excitement. Can't wait to see what is next.

Good book, good story. was a little disappointed that so much bad kept happening

Loved it !!! Could not put it down after reading went back and got the audio version too ! Great narrator looking up more just to hear that voice again

This shifter novel was an unusual book on several levels. I enjoyed it in many places, was frustrated and confused in others. The shifter pack wasn't like any pack I've ever read about. They were more independent & didn't bow down to the Alpha. There didn't seem to be pack like behavior. Although I found the Alpha's un-alpha-like demeanor understandable & at times endearing due to his "accident"; I didn't find parts of it believable.

I was rather confused as to whether the author was male or female because some sections of the book seemed to reflect a woman author while others were hard edged as I usually expect a male author's perspective. It was as if the book was written by 2 different people.

The narrator was male & his voice made it a rougher sounding story. This worked well with the book. Overall, enjoyable.

Great Book, A must read!

If you could sum up The Loneliest Alpha in three words, what would they be?

What was one of the most memorable moments of The Loneliest Alpha?

How sweet Gavin but how rough in a very good way!

Have you listened to any of Jeffrey Kafer’s other performances before? How does this one compare?

This was my first but he did a great job!

T. A. Grey is an awesome author and Jeffrey did a great job! I can't wait for the rest of her books to come to audio!!

This was to simple. I wanted to kick Alicia. The author missed the mark. It just pissed me off.

I like shifting in my shifter books... and it seriously took 11 chapters for the two main characters to look at each other in the face. Gavin, the alpha was scared in the face in his battle for alpha... then his clan kidnap Alicia to be his mate. He literally hides from her... in the closet, behind the door, in dark corner... even in broad daylight... this huge strong alpha hides from his mate! WTF!!!

Yes, I guess this book is angsty all over the place... but eh! Just get too it already... Boring!

No recommendation at all.. Save your credit for something... tolerable!

An excuse of a paranormal romance-weak storyline!

If I wanted to read a contemporary romance novel, then I would have bought a contemporary romance novel. Its as if the author wrote the story and as an after thought was like hey maybe I should add in the word shifter or vampire here and there and it'll be a paranormal romance. Not to mention the superficial characters and plot development. Luckily the narrator was pretty good, but seriously, I cannot believe I wasted a credit on this.