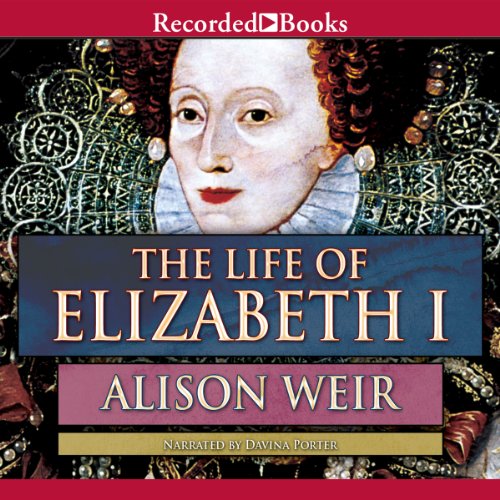 The Life of Elizabeth I

The New York Times best-selling author of The Six Wives of Henry VIII and The War of the Roses, historian Alison Weir crafts fascinating portraits of England’s infamous House of Tudor line. Here Weir focuses on Elizabeth I, also known as the Virgin Queen, who ascended to the throne at age 25 and never married, yet ruled for 44 years and steered England into its Golden Age.

“A riveting portrait of the queen and how the private woman won her public role.” ( Kirkus Reviews)

It is obvious that Alison Weir did a lot of research for this book. I like the fact that she subtly inserted the citation into the narrative. There is a lot of information provided in the book but the story line never bogged down. I do wish Weir had provided more information about the day to day rule of Elizabeth 1. I was amazed at how well educated Elizabeth 1 was and how many languages she spoke. I was unaware she served as an arbitrator between various countries helping to solve problems as to avoid war. Elizabeth 1 seemed to be such a talented person beside the above noted education, she was a magnificent horse women, a musician, dancer, singer, good at needle work, and a good politician. She apparently put the people of England as her priority. No wonder she was known as "good queen Bess". Davina Porter is a fantastic narrator and she was superb with the book. I am looking forward to reading more of Alison Weir.

Inside the politics of Elizabeth I

Davina Porter could read the phone book and I'd listen to her. Her accents and voices given the different characters are wonderful.

Why marrying would have ruined Elizabeth I.

Alison Weir is a master of historical narrative. This is a well written, comprehensive biography of Elizabeth I. The book begins with her Grandfather and quickly sets the stage through the reign of her father and siblings Edward and Mary. After the story of her childhood, the real story begins with the reign of her younger brother.

Elizabeth's story is familiar in broad strokes - Bloody Mary, Mary Queen of Scots, the Spanish Armada, Shakespeare and the English Renaissance. Never the less, the details read like a spy novel, a romance, a treatise on civil government, religion and culture. From Sir Francis Drake raiding Spanish ships to Lord Essex at war in Ireland, the book covers her life and 45 year reign in style.

I particularly like the way Weir quotes her sources in an authoritative manner without disrupting the flow of the narrative. In this way the book reads like historical fiction - which it is not. Weir is simply knowledgeable enough having done adequate research to re-create scenes dramatically with the words of her characters.

Ultimately, there is little revolutionary in her point of view on Elizabeth. As a scholar, I don't think her research brings her to any new or shocking revelations though she clarifies and adds details to many points. Elizabeth was with little doubt a pivotal figure in the history of Europe and defining leader in the development of what was to become Great Britain. I suspect Weir's "The Life of Elizabeth I" is well on it's way to becoming a modern classic on the subject of the life of Elizabeth I. Well worth a read if you have any interest at all. This book is long, but quite accessible.

An Excellent History of the Reign of Elizabeth I

I’ve read quite extensively on the Tudors, especially Elizabeth I. She has always fascinated me. I found The Life of Elizabeth I by Alison Weir one of the best, perhaps my favorite so far. The book covers the period from Elizabeth’s ascension to the throne at the age of 25 until her death as an old woman at 69 with just a brief overview of her earlier life to provide context. The major events of the period were woven into background information on the culture and society of England during the later part of the 16th century. The book was an excellent narrative that never bogged down, at least not for me. The narrator, Davina Porter was perfect.

Alison Weir is a highly respected historian of the Tudors as well as an accomplished writer. I enjoy her books and learn from them, but this one stood out for me. I recommend it highly as an introduction to Elizabeth I or as a pleasant way to revisit the life of this remarkable woman for those already acquainted with her from previous study.

Would you consider the audio edition of The Life of Elizabeth I to be better than the print version?

What was one of the most memorable moments of The Life of Elizabeth I?

the differences between Elizabeth and Henry the VIII

What does Davina Porter bring to the story that you wouldn’t experience if you just read the book?

i love davina porter, as a narrator she is ideal for british history.

listen to the autobiography of henry the viii first and then listen to this one, if you are a history buff like i am you will love it.

I've listened to several Tudor histories recently and this one completed the series. Alison Weir exhaustively researches her subjects and it shows - there is so much information about Elizabeth its mindboggling.

I was fascinated by her relationships with first Leicester and then Essex - she seemed to have a penchant for men that were as colourful as she was and that had petulant characters and egos that needed constant massaging!

I thoroughly enjoyed this book and it goes into some depth but its never overwhelming and explains how Elizabeth steered England into its Golden Age.

Am I hearing things?

I enjoyed the history of the book, but I felt that several events kept repeating themselves, which got a little tedious to hear. Also, the narrator was not my favorite. There were many times I heard her swallowing, rustling, and other people coughing in the background of the audio. It got annoying. I wasn't a huge fan of her impressions, as she never seemed to keep the same one for Elizabeth.

The Woman Behind the Golden Age

While this book stands on its own, this is best understood as the 4th book in a 4-part series with Alison Weir's Henry VIII, The Six Wives of Henry VIII, and The Children of Henry VIII. This book picks up with Elizabeth's ascension to the throne, the previous chapters of her life being intertwined with the events of those books. While this book does stand on its own, a complete picture is far more satisfying to me, and I'd recommend the other books to those interested in Tudor history.

It's my own personal taste, but while I've gained a great appreciation and respect for Elizabeth, I find that her father's antics are far more entertaining. Having said that, the finale to the Tudor Dynasty brings no shortage of intrigue and grandstanding. As with her previous books, Weir's writing style brings history to life. The book digs deeper than many basic volumes on the subject, the characters become personal (and sometimes even personable), and Elizabeth herself strides across this volume as she did in life, both decisive and evasive. The book does deal with the politics of the time, as it's impossible to separate Elizabeth's personal and political lives, and for those interested in learning of the time of her reign, this book is a great primer. From here, there's virtually no limit to what to learn next: explorers, privateers, Shakespeare, spy networks... the list goes on.

Davina Porter, by any name she uses (Wanda McCaddon, Nadia May, etc.), is a fantastic narrator, and in this case she expresses both the power and personality of Elizabeth to her performance. She always brings her A-game, and as such she's earned her place in my all-time favorite narrators.

Will she or won't she marry?

What a disappointment! Listening to this book would leave one to believe that Elizabeth I was one of the most one dimensional and uninteresting monarchs in history. Literally - hours could have been edited out of this work that focus solely on the question of will she or won't she marry! It's so dry in the telling...Sahara dry! It was a real slog to get through. Such an interesting time in history reduced to the banal. Weir is so focused on facts there is no story - the best stories are usually true! Why didn't she let fly with the colorful people, pirates, wars, economy, etc? I'm by no means suggesting she color in the details, she didn't need to, good telling would have done it easily for her. This Elizabeth I is a card board cut out...not brought to life at all. It was like sitting through a class taught by the the kind of history professor that causes your eyes to water with the struggle of keeping them open. Where there is so much focus on dates on facts the life's breath of the people are sucked out and wasted in pedantic verbiage. A little insight into the nature and motivations of these people and time would have gone a long way....

History at its best!

Yes. Any English history buff would appreciate this biography.

What was one of the most memorable moments of The Life of Elizabeth I?

Her childhood. Its amazing how she ended up being the queen and leader of the most powerful country at the time. She had a very sad childhood.

Being English, Davina gave the story an air of authenticity.

I had been looking for an in depth biography of Queen Elizabeth I. Ms. Weir provided highly detailed events of QE's childhood and how she came to sit on the throne, as well as how she ruled. Lots of insight into her personality as well as what kind of person she was which made the book all the more interesting.