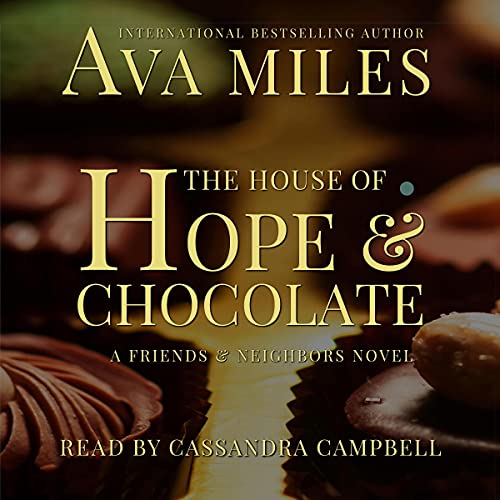 The House of Hope & Chocolate

Ava Miles, author of the number one national best seller The Chocolate Garden, brings you another uplifting book about hope, the will to start over, and the power of friendship. In this first Friends & Neighbors novel, meet a woman determined to realize her dreams and revitalize a beloved neighborhood with two things she believes most in: hope and chocolate.

From the time she was a little girl with a chocolate stand instead of lemonade, Alice Bailey dreamt of opening a chocolate shop. After all, chocolate heals everything, from heartache to woes.

If Alice has learned anything recently, it's that life is precious. It’s now or never - carpe diem time. She's ready to put down roots and live her dreams.

Only, opening up a chocolate shop in this close-knit community proves harder than she imagined, especially when other neighborhood businesses are experiencing hard times. She's not only an outsider, but resentment over her circumstances breeds distrust among some of the other business owners.

And as she struggles to heal and rebuild, she shows her new friends and neighbors that life offers more richness than they realize.

Cassandra Campbell is a prolific audiobook narrator with more than 700 titles to date like Where the Crawdads Sing and The Help. Winner of four Audie Awards and nominated for a dozen more, she was a 2018 inductee in Audible’s inaugural Narrator Hall of Fame as well as a 2021 inductee as a Golden Voice, AudioFile magazine's lifetime achievement honor. She has consistently been an AudioFile Best Narrator as well as a Publisher’s Weekly Best Narrator of the Year. As an acting teacher, she spent five years as a faculty member of the Los Angeles County High School for the Arts and has performed in and directed dozens of plays at theaters across the country.

I read to escape the pandemic . I wasn't crazy about the reader but I enjoy other reader that have read Ava's other books .

I had problems with the narrator. The voices were to close to the same sound and I often confused who was “talking”. I loved the story but also feel it is similar to the Dare Valley books. I loved those so even saying that I will probably continue with this series as they are released. ;)

I enjoy this author’s writing style very much. However, this was a rough one to listen to because of the narrator. She did not do this novel justice. I did not enjoy listening to this book at all. It took me forever to finish it, which is very unusual for me.