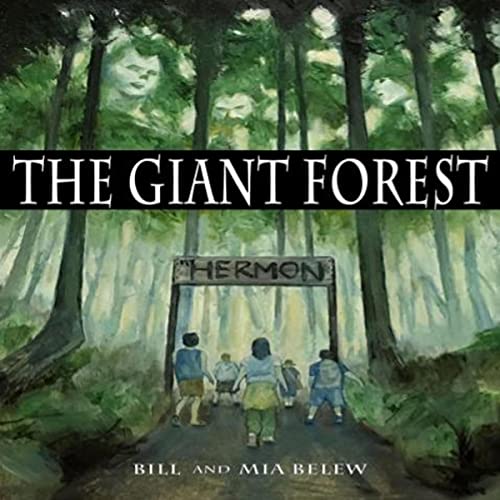 Move over, C.S. Lewis and Roald Dahl. There's a new storyteller on the rise, and she's only 11 years old.

In this true-to-life story, Aimi, Roci, Mousi, Sybil, and Sycamore are a loose group of friends, aka the Bunch, who attend school together. The Bunch go to a 150-year old church camp in Mount Hermon, founded around the time of the first gold rush in 1849. The camp is located in a giant forest situated in the Santa Cruz mountains of California, just over the hill from Silicon Valley.

In keeping with the principles of its founders, Bart, Prissie, and their adopted son Artie, the camp administrators want the camp to be a modern-day refuge for children like the Bunch who live at a time when many people around them, including their parents, are chasing new gold in their area.

Each member of the Bunch becomes seemingly inexplicably lost in the giant forest. They must each find themselves, then find one another before they can together again find their way home. Along the way, they receive help from new animal friends, whose ancestors had previously received a life-saving kindness from the founders of Mt. Hermon. Along the way, each member of the Bunch battles with and finds resolution to problems they face at home - from overbearing or neglectful parents, sibling rivalry, prejudice, betrayal, and displaced loyalty.

When the five become reunited, bigger battles ensue. To return home, they must overcome giants that have plagued them throughout their lost experience. Once victorious, the Bunch is led back to Mt. Hermon by their forest friends.

A chapter book for for preteens who love to listen! Enjoy discussion questions at the end of each chapter for reading groups or parent and child devotions. Giant forest = a really big forest or a forest with giants. Or both. Only the listener knows.

A wholesome read with fantasy twist

This is a story of five friends who are lost in the forest and during their journey to get home, they learn the value of friendship and self-worth. This is a Christian based chapter book with discussion questions after each chapter. In some settings such as weekly Bible study or homeschool classes, this book would be a good source of curriculum. As a general read, however the questions are distracting and break up the flow of the work. The story and life lessons contained within are still insightful and entertaining. The characters are rich and the ending is unique. I would recommend this book to Christian homeschools and bible study groups. I would encourage the authors to make two versions of this book one with the questions for those looking to expand on what they have read and one without for those who just want an interesting fantasy fairy tale read.

Wholesome enjoyable preteen book written by father/daughter team. Great narration as well, and opportunities for discussion questions for kids/parents to listen together.

A book for children

This book was written by a Preteen and does give insights into how children think at that age. To many storylines going, and children dealing with kids that teased or were mean to them. Some of the kids did not even realize that the other children were being mean because they were so innocent.

This was an okay read for me

A book of short stories. They were interesting but not really my kind of read.

I found this story to be both delightful and imaginative. I recommend this story for younger readers. Ella Jinhee Thompson's narration was fine and she gave the characters different voices which helped to distinguish each one. I was given a free copy of the audiobook and I have voluntarily left this review.

I think I would have loved it as a kid. I enjoyed it as an adult. The inclusion of discussion questions is a wonderful way to get family members involved. This story written by an 11 year old was better thought out and more imaginative than many books I've read by much older, more experienced authors. I look forward to seeing what amazing adventures she has yet to write.