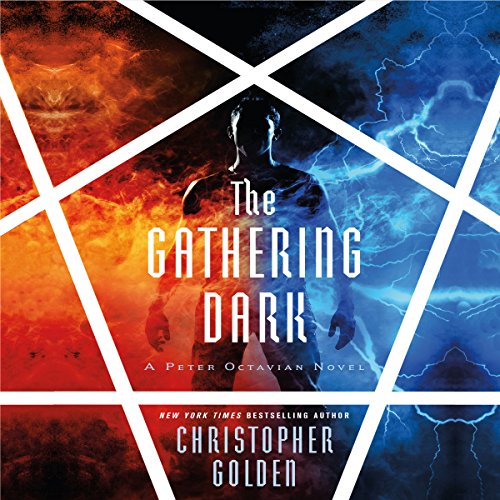 The Gospel of Shadows enabled the Catholic Church to control all manner of supernatural beings for centuries. When the book was destroyed - and the ruling body of the Church with it - it enabled the Shadows, the vampires of legend, to learn the hidden truth of their triple nature: part human, part demonic, part divine.

But it also weakened the barriers that exist between the worlds, and now beings of pure evil are breaking through - creatures from other dimensions for which Hell is just a name.

Peter Octavian, once a powerful Shadow, now restored to humanity, is the only man with sufficient knowledge to stop them. Aided by an earthwitch, a vampire, and a priest, and calling on the magical forces of mother nature herself, Octavian stands between the Earth and apocalypse, as entire cities are plunged into the abyss.

Apparently, though I couldn't verify this, this book is t5e 4th book in the Shadow saga. I didn't know this when I purchased it.

That being said this review is based solely on the book and not the series. I really enjoyed John Lee's performance and that was about the only positive thing I can find in the book.

There are several characters introduced (re-introduced) that I knew nothing about and couldn't care less about. Peter Octavian really isn't he primary character. He's one of several and while I could grow to enjoy his character he doesn't get enough chapters focused on him and his actions. This might be different if I'd started at the first book int eh saga but I don't know for sure.

Would I buy the other books in the saga? Based on the writing of this book no. While the characters do things I'm not invested in them and the reader doesn't spend enough time to become invested in them.