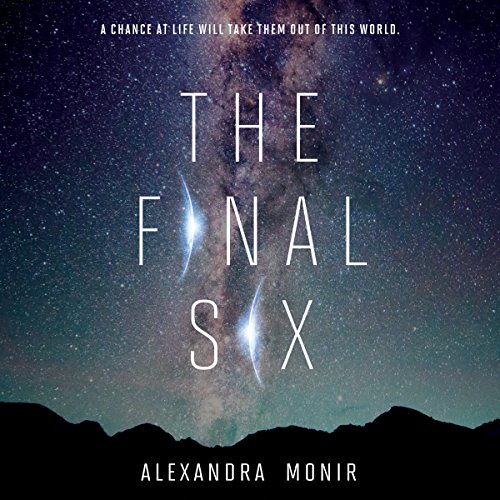 Set in the near future, this action-packed YA novel - already optioned by Sony Pictures - will take listeners out of this world and on a quest to become one of six teens sent on a mission to Jupiter's moon. This is the next must-listen for fans of Illuminae and The Martian.

When Leo and Naomi are drafted, along with 22 of the world's brightest teenagers, into the International Space Training Camp, their lives are forever changed. Overnight, they become global celebrities in contention for one of the six slots to travel to Europa - Jupiter's moon - and establish a new colony, leaving their planet forever. With Earth irreparably damaged, the future of the human race rests on their shoulders.

For Leo, an Italian championship swimmer, this kind of purpose is a reason to go on after losing his family. But Naomi, an Iranian-American science genius, is suspicious of the ISTC and the fact that a similar mission failed under mysterious circumstances, killing the astronauts on board. She fears something equally sinister awaiting the Final Six beneath Europa's surface.

In this cutthroat atmosphere, surrounded by strangers from around the world, Naomi finds an unexpected friend in Leo. As the training tests their limits, Naomi and Leo's relationship deepens with each life-altering experience they encounter.

But it's only when the finalists become fewer and their destinies grow nearer that the two can fathom the full weight of everything at stake: the world, the stars, and their lives.

Why do so many authors dream up these scenarios where teens are our most important resource? the majority of teens I grew up with were stupid, self important, loud mouths who more interested in surviving the mundane pageantry that all high schooler are unwillingly subjected to. (And I went to a magnet high school)

I'm certain there are exceptions to the rule, but that's irrelevant when conjuring up the weak plot of making teens the only ones physically capable of surviving the interplanetary trip.

this makes the book all the more disappointing as the premise is truly engaging. When the aspects of science fiction took center stage, I found myself deeply engaged and could easily suspend my disbelief.

so imagine my frustration when I kept getting dragged out of it by the nauseating romeo and juliet, star crossed, teen romance that felt more shoehorned in to pander to an audience rather than develope on a more natural pace. (not to mention, but the ending felt like a bit of a lame cheat.)

It's no doubt smarter than the other churned-out trash turned cash cows, milked dry by Hollywood and nearly on par with Hunger Games which is one of the few YA titles I can tolerate. And if you're into that sort of story then this is the book for you, but if you were interesting in and riveting sci-fi title with what was supposed to have a strong female lead, then I'm afraid you'll be just as disappointed as our Male protagonist when he *Spoilers*
finds out he didn't make the cut.

This was an incredible YA novel that Sony has already bought the movie rights for, and it should make for an excellent trilogy of movies if this first book is any judge of it.

Earth is slowly being destroyed due to humanities actions, and the worlds leaders have put together a team to colonize Jupiter's moon Europa, as scientists have determined this to be the best possible new home for humanity to start over.

24 of the most talented and intelligent teens from all over the world are selected to compete for the 6 slots for this mission, but there turns out to be much more to this competition for both these teenagers and for the mission as a whole!

A solid 4.5 out of 5 star read, and I'll be starting the second book just last week!

Not bad, not something to write home about..

I liked it. I didn’t love it. The storyline is rather predictable, but one that I still enjoy listening to none the less. I’m buying the second as it got much better toward the end.

I've never loved a book this much!

I couldn't stop reading! The story was perfect! I didn't expect any of the plot twists. I loved all the characters and felt every emotion they did. This story is a work of art and I cried when I finished it. The voices given to each character were flawless. I don't know if there's a sequel but there should be. I'll be waiting for one, Alexandra Monir. In conclusion, everyone should read this fantastic book.

although this was a YA book I thoroughly enjoyed it and can't wait for the sequel!

I had some struggle to get in to the story, but after a while I get to know the charactes and the storyline and I couldn't stop anymore, just wanted to go on in the story.

after I finished the book I right away got the next one so I could continue!

The narrator did a perfect job, it was really nice listening!

slow start. good story. what happens next?????
hopefully there will be a sequel soon. good

Captured you from the beginning - interesting idea

I really enjoyed this book. It ws a bit too short for me, but still very good. I loved the idea and the story was great. It ended where I thought there should be another one, but it wasn't listed as a series. So I searched her books and found "The Earth Below", which continues the story. So I was super glad for that. The female narrator was great, however, all the female voices sounded the same. The male voice was great and you could tell the voices apart. A very fun and interesting story. It left you wanting for me, so I'm glad I found the next book. I really think this should be listed as a series.

Interesting retelling of an old story

As many great writers have done, the author effectively retells an age old story in a current culture setting. The well told story is worth the read. The only downside to the story is the repeated comments about global warming being solely caused by humans. Although global warming is a great pretext, the ongoing blaming detracts from the story ever so slightly.

I liked the book but near the end therr were some words that went completed in the audio. I hope there will be a second book.