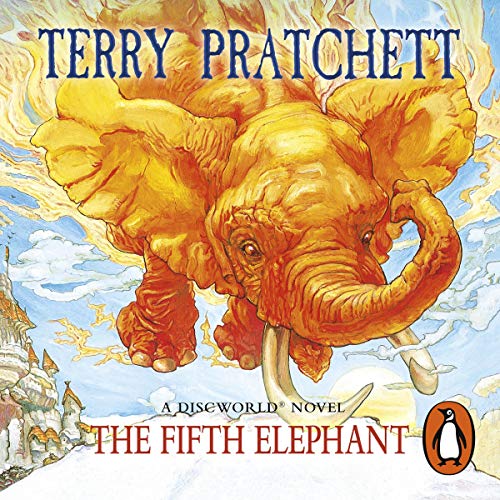 Sam Vines is a man on the run. Yesterday, he was a duke, a chief of police and ambassador to the mysterious, fat-rich country of Uberwald. Now he has nothing but his native wit and the gloomy trousers of Uncle Vanya. And if he can't make it through the forest to civilisation, there's going to be a terrible war. But there are monsters on his trail. They're werewolves - and they're catching up. Sam Vimes is out of time and already out of breath....

Hard not to love Commander Vimes

The Vimes story lines are always Prachett's best work. This is funny, clever and exciting. This was the first time I had heard Stephen Briggs reading and it was a bit off putting for me but he performed magnificently. Plus dwarves, and vampires *and* werewolves, how can you not love these books?

I would not recommend reading this without first reading the other city watch books. You'll miss out on all those little "inside jokes" peppered throughout. No one likes missing out on inside jokes.

What did you love best about The Fifth Elephant?

The story was great, and as usual Stephen Briggs did his exemplar best. Terry Pratchett at his best. I have read and reread this story so many times, but I find there is always something new I have missed in past readings.

What was one of the most memorable moments of The Fifth Elephant?

The chase of the Werewolves, you know Vimes is going to get out of it, but you never quite know how, until he does.

Which character – as performed by Stephen Briggs – was your favorite?

Being Welsh myself, I love Stephen Briggs's Dwarf's, he is so good with the accent, I could almost believe he was born next door to me.

I always try to make Terry Pratchett's books last as long as I can, so I limit myself(if I can) to three hours a day, mostly though I just keep on listening spellbound.

One of his best.

I love S. Briggs, and I love Pratchett books, especially when read by Briggs, but for some reason this one was really... choppy. There were glitches in the file, through both parts, where it would blank out, skip or whatever, and often I'd miss a word or two. Disappointing for such a great story!!

Another wonderful book in The Watch Series

If you're new to Disk World's The Watch Series, starts with Guard's Guards where Captain Vimes along with Carrot, Colon and Nobby hilariously fight a huge magical dragon, helped by Lady Sybil Ramskin the breeder of the tiny Swamp Dragons so popular as cigar lighters. The Lady is captured, chained to rock and offered as dinner for the wicked fire breathing dragon. Let the fun begin !! I loved every word read and laughed til I cried. That's the first book to listen to, but all Terry Pratchett's books are Stand Alone. The Fifth Elephant Sam Vimes has married Lady Sybil the richest woman in the city and is now not only Commander of Watch but Sir Samual Vimes and His Excellency The Duke of Anhk Morpork, much to poor Mr Vimes' dismay. He hates the aristocracy in all its forms and appalled to find himself one of them. The Patrician has ordered The Duke to attend the Coronation of the Low King , but where His Excellency The Duke of Anhk Morpork goes so does the Commander of The Watch and where the Commander of the Watch goes, much to his wife's dismay, he always finds a crime. I'd previously read all Disk World books and later tried out the audio version, WHAT A DELIGHTFUL TREAT ! The narration of every Disk World book is brilliant, clever and so very very funny. I highly commend immersing yourself and family in the magnificently funny exploits and thoughts of Sam Vimes,. Excellent Rendition !!!!

Thoroughly enjoyed this book, another fantastic addition to the Discworld series. I am in love with Gavin.

As always Terry Pratchett delivers. His stories about the Watchmen are among his best and this one is no exception. But in my opinion mr. Briggs, though being a good reader, is not on par with Tony Robbinson an certainly not with Nigel Planer whose readings of Pratchett's novels are second to none. It's still a good listen, well worth hearing.

This might be my favorite Discworld story so far! Vimes and Carrot have been my favorite characters for a long time, and this book just made me love them even more 😊

Anybody new to Pratchett and 'Discworld', should ideally start at the beginning. As Pratchett' character development, is truly wonderful to behold. However, all those rulebreakers out there can easily pick up any of the series dive in and just appreciate it, as a standalone. Well worth the credit.

Really good book and well-performed. Excellent clarity to characters with affectations and accents. Listen up.

Pratchett at his best. Hard to stop listening and get on with work. Best for a long trip.

lovely and cunning at the same time - as always

lovely and cunning at the same time just the way you would expect of T.P.

Satire, Fantasy all I want in a good book.

Laugh out loud funny. So deep you can listen to it 10 times and still learn something new. Timeless Pratchett.