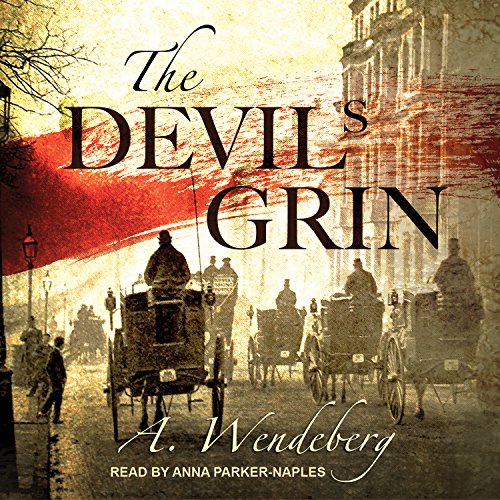 In Victorian London's cesspool of crime and disease, a series of murders remains undiscovered until a cholera victim is found floating in the city's drinking water supply. Dr. Anton Kronberg, England's best bacteriologist, is called upon to investigate and finds evidence of abduction and medical maltreatment. While Scotland Yard has little interest in pursuing the case, Kronberg pushes on and crosses paths with Sherlock Holmes. The detective immediately discovers Kronberg's secret - a woman masquerading as a man in order to practice medicine - a criminal deed that could land her in prison for years to come. But both must join forces to stop a crime so monstrous, it outshines Jack the Ripper's deeds in brutality and cold-bloodedness.

"A very enjoyable read...I loved reading about the medical development of the time, a topic which is undoubtedly owing to the author's expertise in the field." ( The Baker Street Babes)

Start out strong but went downhill

The narration nearly destroyed this reasonably entertaining story. I really connected with the main character until an improbable romance, and masochistic turn reduced my interest in the story. Could have been so much better.

Our Introduction to an Amazing Woman

A reminder of what women endured and overcame to experience life on their terms no matter what obstacles they faced. From an impoverished mother in a rookery, a brilliant mind that can match wits with Sherlock Holmes or the gilded cage of the highborn. This has an excellent number of mysteries that weaves an entrancing web.
The Character of Anna is all things strong women should exhibit—sharp intellect, strength of purpose, a vulnerability when her heart is aroused.

I’ve listened to the first 4 books on Audible and the Narrator’s voice and characterization of Anna, the shrillness, the German accent which always seems off somehow and poor transition between female and male characters had me gritting my teeth my at times. Sherlock Holmes sounds like a effeminate harpy.

The WRITING is very good. Historical and medical research was excellent and could really transport you to St. Giles rookery, London’s medical school, and Tea Shops as well as, of course, 22A Baker Street.
I highly recommend this book be READ on Kindle/hard copy. The world building and character development are well worth the read. At the very least, do yourself a favor and listen the sample. Text to speech would have been a better alternative. The Narrator is good in her other dramatic readings.