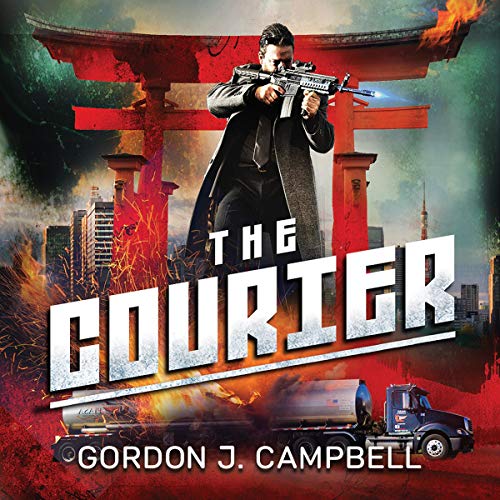 An expatriate businessman, Gregg Westwood, leaves the Officers’ Club at an American Air Base in Japan unaware about the impression he’s made on two intelligence agents. They sized him up as someone with potential for strategic deployment, and more importantly, he's under the radar.

Gregg's exploits start with what he thinks is a one-off assignment as a courier, and the straightforward task spirals out of control. He's forced to rise to the occasion and use every resource available to survive. Even his family is jeopardized which forces him to return to Japan to settle scores.

The Courier is one man’s struggle to fight for survival in a world that he's not been trained for and where violence and retribution are the names of the game.

The Courier is the first novel in the Gregg Westwood Series of Action Thrillers by Gordon J. Campbell, following a main character with the same name.

Award-winning actor and narrator Kevin Stillwell expertly delivers this well written and easy to follow story in which we see family man Gregg Westwood, a regular Canadian, living in Japan and working as a medical representative being recruited by the Central Intelligence Agency for a simple job that makes him a courier for the organization. But, as always, there is much more happening in the shadows that the eye can see.

Kevin Stillwell effortlessly switches accents and voices, becoming a new character in a split second as the action moves swiftly from Thailand to the United States, to Japan and round again. He reads in a clear, calm and unhurried cadence, but at the same time he manages to keep the listener entertained and on the edge of his seat for the almost 8 hours and a half of the audiobook production.

Although this is a first book from a new author, I think it deserves your attention as it includes all the traits found in other Thrillers from authors like Brett Battles, Vince Flynn or Mark Greaney. Yes, Gregg Westwood needs to be more fleshed out and Mr. Campbell has a lot to prove until he will be called a household name like those mentioned above, but, I consider that the fact that Kevin Stillwell helms this series is a big thumbs up for the dedication of both author and narrator.

If you liked this review please vote Helpful below and find more of them here and on theAudiobookBlog.
I also post honest reviews at the author, narrator or publisher's request, you can get in touch with me for more details.
Thank you,
Victor

WOW!!! This book starts out with action and the compromise of an assassin with in about the first five minutes. It the jumps to a woman overdosing and rescue with Narcan by two officers in West Virginia.
The protagonist, Gregg Westwood is a medical sales rep from Canada. Living in Japan along with his Japanese wife and daughter. He’s given the opportunity by US intelligence to make some quick easy money and yet he’s hesitant. Always believing that if something sounds too good to be true it probably is. The draw is too great and after accepting the job he’s given a package to courier to Bangkok. What was supposed to be a foolproof job turns into a nightmare when someone tries to kill him. When other attempts are made on his life and Gregg proves a worthy opponent the yakuza on his tail kidnap his daughter and put his wife in the hospital.
This book is very fast paced, descriptive and the characters very believable.
Kevin Stillwell does an excellent job narrating.
This book has my HIGHEST RECOMMENDATION.
If you found this review helpful please indicate so.
Thank You.

Loved this book. It’s incredibly fast paced and tough to turn off. You really feel for Gregg Westwood and his situation. Also I really enjoyed the small details that immerse the listener into modern Japanese life.
I can’t wait for Gordon Campbell’s next book.