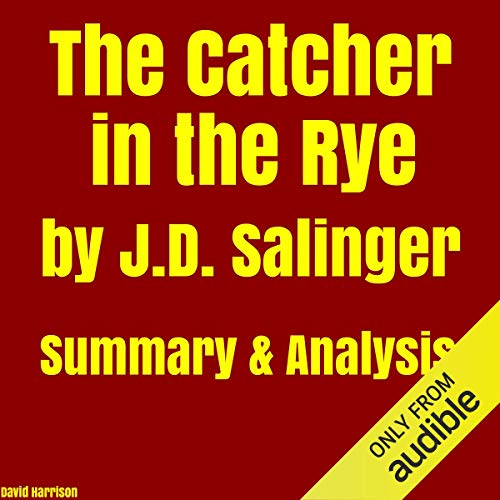 The Catcher in the Rye by J.D. Salinger - Summary & Analysis

The Catcher in the Rye is a 1951 novel by J. D. Salinger. A controversial novel originally published for adults, it has since become popular with adolescents for its themes of teenage angst and alienation. It has been translated into almost all of the world's major languages. Around one million copies are sold each year with total sales of more than 65 million books. The novel's protagonist Holden Caulfield has become an icon for teenage rebellion. The novel also deals with complex issues of innocence, identity, belonging, loss, and connection.

I wasted my credit with this summary. I was in a rush and assumed that it was the novel.

not what I wanted

I was looking for the actually audible book. this is no it. Audible books does not have it.

A monologue of youth that also ended an erra.

I think this was a great summary of J.D Salinger's work. Although it was originally intended for adults Caulfield's alienated, angst filled, immature character struck a cord with the youth who could empathize with the dating, bullying, and school drama. It's an in depth overview of growing up in an adult world that seems so phony to Holden. As a first time listener, I can't imagine how this classic book misguided Chapman into killing the young and talented John Lennon. I guess everyone's interpretation of literature is different. The narrator did a really good job in narrating this book.
I was given a free copy of this book and have decided to voluntarily leave this review.

Audible must make a decent profit offering this instead of the actual book. I almost bought it. It was the low rating that stood out, thats why I'm leaving a review for something I didn't buy.

I'm very disappointed. i thought i was buying the book!!!!! I dont need to listen to someone elses analysis. whar a waste of my money. Maycancel my subscription

I mistakenly thought this was the book, it's not. The summary and analysis is so high-level that it loses the impact of the novel. Don't purchase this.
Disappointing the novel is not available.

I needed the book for my teen on audible. Only thing I can find is the summary and cliff notes!!! This is a classic and it’s not on audible?!? What is wrong with the world?!

This is not the book!

I didn't know this was the summary. It could definitely be more clear that this is not the actual book. Really disappointing.

Summary Only - Not the Book!!!

Be careful- They got me thinking it was the actual book. ONLY A Summary. Wasted my money and i wont even bother to listen.

Not really much of an analysis... more or less just one, long plot summary. No real depth.

Does not contain the story, analysis only