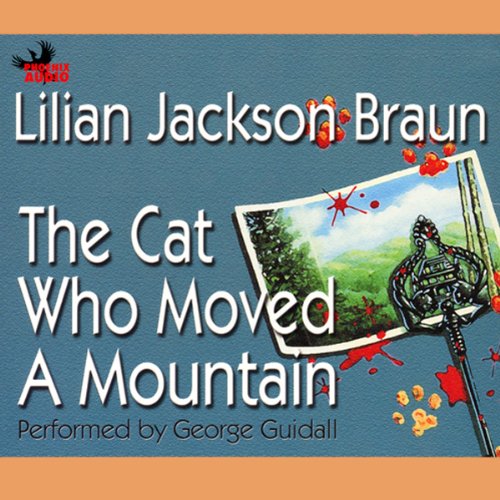 The Cat Who Moved a Mountain

The Cat Who Moved a Mountain

After five years of legal formalities, Jim Qwilleran has officially inherited his freedom and a fortune, which leaves him with a serious dilemma. What should he do now? Seeking a place of peace and isolation to make up his mind, he heads to the Potato Mountains for the summer. But Qwill lands in the middle of controversy, not solitude.

The mountains are a haven for the independent, roughneck descendants of Prohibition-era moon-shiners. The valley is home to developers eager to turn the pristine Potatoes into a giant tourist trap. To make matters more complicated, a Tater, as the mountain folk are called, has been convicted of the murder of millionaire developer J.J. Hawkinfield. Some people swear the wrong man was convicted, and Qwill is inclined to agree when he hears what transpired before the trial.

But if Forest Beechum didn't do the dirty deed, who did? With Qwill, Koko, and Yum Yum on the case, the killer won't get away with murder.

Felonies and felines: check out all of our titles in The Cat Who series.
©2005 Lilian Jackson Braun (P)2005 Phoenix Audio

One of My Favorite Authors

I love this book. It is funny & full of mystery. Guidall is one of the best readers around. I love all of the Cat Who books.

In this book Jim Qwilleran decides to take a vacation away from Pick Axe and all his friends there. A friend has recommended an area in the Potato Mountains. Qwill rents a large house (formerly a Bed and Breakfast Hotel) located on top of a mountain because it is the only place that will accept his two beloved Siamese cats.

HIs adventures in the "Potatos" is similar to his experiences in Pick Axe. There are interesting people, and a murder to solve. If you like other books in the series, you will probably like this one.

I listen to these books to relax and leave the "real world" behind. There is no graphic sex or violence and no coarse language. George Guidall is an excellent narrator.

This was my first "The Cat Who..." book and I enjoyed it and am glad I purchased and listened to it. The narrator did a wonderful job in conveying the story so that the characters were distinguishable and entertaining. It's not a particularly challenging mystery and the pace is leisurely, but the characters (even the cats) have depth and believability. Pass some pleasant hours, get some chuckles and let an excellent narrator tell you a story while you are driving or cleaning or weeding your garden. Or just sitting on the porch to relax.

I enjoyed the story but was distracted by the bad production values. One chapter is interrupted by the first line of the following chapter and phrases are repeated in a couple of places.

Suspense to the end

The Cat Who Books are our first choice when we are traveling. Clean, wholesome and humorous for all ears. We have only a few left to hear.

This is my new favorite in 'The Cat Who' series.

Qwill goes on vacation with the cats and it really is a delightful tale.

If you haven't read the other novels (in order) you might feel a little lost on the characters, but it is not hard to be captivated by the interesting people and personalities.

one of the best in the Cat series

Would you consider the audio edition of The Cat Who Moved a Mountain to be better than the print version?

What was one of the most memorable moments of The Cat Who Moved a Mountain?

Qill slipping at the waterfall, you could sense his panic and relief at his rescue

I always George's renditions and his subtle but distinct voices he imparts to the characters.He has a very mellow voice which is easy to listen to and reads at just the right level of pace.

On a long drive I certainly would. But was very happy listening to it in 'chunks'!

Only problem with this audio was that some chapters have become mixed up - the breakdown on the mtn jumps into an office meeting. Can this be rectified? Had to listen twice to make sure I hadn't missed anything.

Errors in chapter 15 and 16, scenes not in order

This title needs to be checked for scene order in chapters 15 and 16, specifically about the car accident.

Thanks Lillian Jackson Braun. You're always there for a good read.