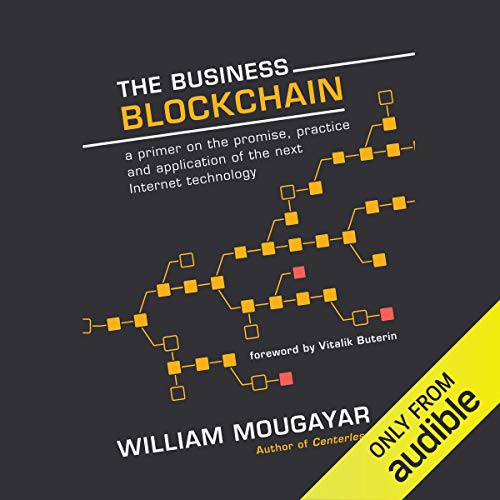 The definitive pioneering blueprint covering the what, why, and how of the blockchain.

Blockchains are new technology layers that rewire the Internet and threaten to side-step older legacy constructs and centrally served businesses. At its core, a blockchain injects trust into the network, cutting off some intermediaries from serving that function and creatively disrupting how they operate. Metaphorically, blockchains are the ultimate non-stop computers. Once launched, they never go down, and offer an incredible amount of resiliency, making them dependable and attractive for running a new generation of decentralized services and software applications.

The Business Blockchain charts new territory in advancing our understanding of the blockchain by unpacking its elements like no other before. William Mougayar anticipates a future that consists of thousands, if not millions of blockchains that will enable not only frictionless value exchange, but also a new flow of value, redefining roles, relationships, power, and governance. In this book, Mougayar makes two other strategic assertions. First, the blockchain has polymorphic characteristics; its application will result in a multiplicity of effects. Second, we shouldn't ask ourselves what problems the blockchain solves, because that gives us a narrow view on its potential. Rather, we should imagine new opportunities, and tackle even more ambitious problems that cross organizational, regulatory and mental boundaries.

Drawing on 34 years of technology industry experience as an executive, analyst, consultant, entrepreneur, startup mentor, author, blogger, educator, thought leader, and investor, William Mougayar describes a future that is influenced by fundamental shifts brought by blockchain technology as the catalyst for change. William Mougayar has been described as the most sophisticated blockchain business thinker. He is a blockchain industry insider whose work has already shaped and influenced the understanding of blockchain for people around the world via his generous blogging and rigorous research insights. He is a direct participant in the crypto-technology market, working alongside startups, entrepreneurs, pioneers, leaders, innovators, creators, enterprise executives, and practitioners; in addition to being an investor, advisor, and board member in some of the leading organizations in this space, such as the Ethereum Foundation, OpenBazaar, and Coin Center.

Just as the Internet created new possibilities that we didn't foresee in its early years, the blockchain will give rise to new business models and ideas that may still be invisible.

There is nothing in this book that you can't find in any general discussion of blockchain. Lots of generalizations and hyperbole. Basically, hardly any meat to be found anywhere.

What does the reader learn from reading this book? That he should check out another one.

Blockchain is the future

Great for those that want to fully explore the possibilities, as well as limitations of blockchain as it gradually integrates into society. This book will open your eyes to why Blockchain technology is so revolutionary, often making comparisons to the early days of the internet. I will be coming back to this book often over the years to remind myself of the days where Blockchain was in it's infancy.

It's okay. Doesn't really teach you too much about Blockchain. Rather just mentions the potential etc

Overall, a good introduction to block chain technologies. If you're hoping for anything in depth, you're looking at the wrong book. The sections concerning smart contracts and smart oracles was especially informative . So was mention of the Ethereum virtual machine.

Blockchain and the next generation of networking

A truly fascinating evolution to the existing internet, may be just as profound as the web.

The authors were not technical and not too simplistic in their analysis of the technology of the blockchain. Although it was more catered towards business specifically financial institutions.

The block chain has always been associated with crypto currency since bitcoin was the initial innovator. It's really a simple idea that can expand to include very complex innovations that reach well beyond business. The idea that the many can better do what the single can, even if the single is an expert.

The authors explained this as a decentralised system where operations, authentications, certifications etc. can be spread across many individually autonomous nodes (computers) thus eliminating the middle men and vastly reducing costs while providing better and quicker service.

This idea, or to put it more precisely, network philosophy, is a threat to governments, old school businesses, financial institutions, and jobs in general. The author unfortunately did not touch on some implications.

Again a technology that is on the move and probably unstoppable by any government or regulators, and a major disruptor to our way of life, while having the potential to transform the world hopefully to a more efficient machine.

An important subject, as indicated by the high rating given. The author could have said more though.

Wealth of Ideas obfuscated with information

Without question I enjoyed this book. The author is very clearly knowledgeable on the topic. At times rambling through attempts to explain his thoughts on what the reality is or future potential is with blockchain technology.

Plain language introduction to a future with blockchain.

I really appreciate that William took the time to first thoroughly understand blockchain technology. This is important as it shaped his world view of the possibilities and it shows in the many ideas he shares and perspectives about blockchain.

The book was narrated really well and felt natural as I digested chapter after chapter. The key takeaways at the end of each chapter also helped me recall the points William wanted to emphasise.

My only qualm is that being such a nascent technology so much evolves over such a short time. I read this book in April 2020 and some parts already felt dated. But that’s the nature of this beast. I look forward to reading William’s most recent works.

There was a time when you could put being familiar with the web, word processing systems, etc on your cv. Or talk of being a web developer when there were only a handful of people who knew what that even meant. Not anymore. The same will be said of blockchain. I recommend this book most especially to anyone of a working age or intends to join the workforce by 2025; beyond that I think more current books would be relevant.

Discusses areas of application and concerns regarding blockchain. The last section on project of blockchain as standard platform for developers is interesting as how it compares to the rise of web development.

the book felt like blockchain propaganda. not an informative book on the technology. might be more enjoyable for those directly immersed in the field.

Awesome inspiration.... A must read
.... Different perspectives, hope, vision and a thorough understanding of the concepts underlying....

One sided view of Blockchain

Great overview about Blockchain and decentralized economy. I was missing more skeptical point of view regarding the current hype about this technology.
I recommend this book to all interested in decentralized world.

The speaker has an annoying rythmn. The content is very generic, but this might be due to the age of this book.

Speaker talks bored. so u get bored and cant consentrate on the theme and story...

Really just the Myth, not a real insight story

It tells a lot what is generally known, but very little about the real revolution, which is sold with the Blockchain hype. Not very infirmative above the superficial level.