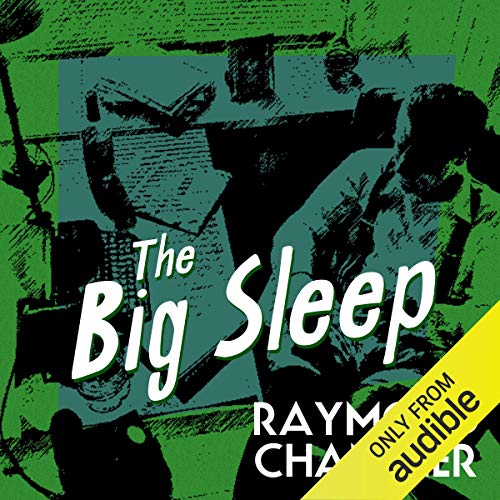 Los Angeles PI Philip Marlowe is working for the Sternwood family. Old man Sternwood, crippled and wheelchair-bound, is being given the squeeze by a blackmailer and he wants Marlowe to make the problem go away. But with Sternwood's two wild, devil-may-care daughters prowling LA's seedy backstreets, Marlowe's got his work cut out - and that's before he stumbles over the first corpse.

Raymond Chandler was born in Chicago in 1888 and moved to England with his family when he was 12. He attended Dulwich College, Alma Mater to some of the 20th century’s most renowned writers. Returning to America in 1912, he settled in California, worked in a number of jobs, and later married.

It was during the Depression era that he seriously turned his hand to writing and his first published story appeared in the pulp magazine Black Mask in 1933, followed six years later by his first novel. The Big Sleep introduced the world to Philip Marlowe, the often imitated but never-bettered hard-boiled private investigator. It is in Marlowe’s long shadow that every fictional detective must stand – and under the influence of Raymond Chandler’s addictive prose that every crime author must write.

"Anything Chandler writes about grips the mind from the first sentence." ( Daily Telegraph)
"One of the greatest crime writers, who set standards others still try to attain." ( Sunday Times)
"Chandler is an original stylist, creator of a character as immortal as Sherlock Holmes." (Anthony Burgess)

Laughable voice for the women

It begins very well ; But as soon Porter try to tell the women, it becomes just laughable.
Impossible to focus on the story with so bad women voices like this.

There is very little that has not been written or said about Chandler. Interestingly, not much of that critique is negative. Maybe that's because he defined the genre. He is what everyone remembers of Bogart and Becall. He wrote the smart Alec into existence. Like Hammett, he forged a path that so many have followed it is now a ribbon as wide as Hollywood and populated by more wanabees than, perhaps, any other genre. He took pulp fiction and made it mainstream, populated by Mitchum, Gambon, Downey, Gould and many, many more. I haven't done the research, but I suspect that there are more Philip Marlowes credited in movies than any other character.
So what is defining? I don't know and it's too far down the road to try, but this work (the first credited as a Marlowe mystery and written by Chandler at the ripe age of 51) is the epitome of the class. It has the fast track mouth, the classy babes, the trouble when they walk in the room atmospherics and the rank smell of smoke, whiskey and inexpensive perfume. It has a crime (although, what crime, it is unclear until the credits are rolling), a solution and the great detective that solves every other problem, but this one. Just perfect.
I enjoyed Ray Porter's performance. It reminds me more of Mitchum than Bogie or Gould. A real, "Who gives a Flying ..." delivery. I'm looking forward to listening to more of him.

PS: this is an unabridged version. There are plenty of abridged versions, including radio plays, but the devil is in the detail with Chandler, so I suggest you don't miss a line.

Detective Noir at its finest


It's hard not to picture Bogart, but there is so much that is lost on the silver screen. The movie 'stage punches' and dated cinema left me feeling disconnected, whereas in the book, the grit and brawn came to life in color.

Raymond Chandler is the Homer of Lalaland. What Faulkner was for Mississippi, what Hemingway was for the Florida Keys, what Emerson was for Massachusetts; that is what Raymond Chandler was for Los Angeles. He was the author who defined the regional vernacular, who determined the appropriate literary form for all subsequent regional writers.

You may find that statement overblown. You will say, Raymond Chandler was just a mystery writer,. But that misses the point:

So read Raymond Chandler. Read everything. Start at the beginning with “The Big Sleep”, and keep going till you get to “The Long Goodbye”. Don’t ask which is best. It would be like asking which Faulkner novel is best. You can’t just pick and choose. They’re all part of a landscape, and you won’t see the entire panorama until you have read through them all.

Decent, but a little disappointing

I was very excited to see that many of Ray Chandler's books were now available with Ray Porter as the narrator. Ray Porter is one of the aces among narrators and Ray Chandler a pioneer among detective novelists - would seem to be a slam dunk for an audio book but it really turned out to be only mediocre. I think the way Chandler writes didn't sync well with the way Porter reads, which made it one of those books that was difficult to follow. I found myself perpetually re-listening to a part trying to figure out what had just happened.

Sets the bar for noir...
However, I know the lead female parts are supposed to be annoying but it was too much.

The Bogart / Bacall movie of The Big Sleep is a favorite of mine, but I'd never more than skimmed the novel. It turned out to be interesting to compare the two.

At first my impression was that the movie loses a lot compared to the novel. Chandler writes beautifully, with genuine wit, and his male characters are well realized, as far as they go. Very good dialog, sensible interactions with the police and D.A.

In the audiobook, Ray Porter's performance really ties it together. It's hard to imagine a better Marlowe, and he's very good at the rest of the male characters. He's terrible at the women, as he'd be the the first to acknowledge, though given something to work with, as in Farewell, My Lovely, he's much better.

But then, what female characters? There's Vivian, the Bacall role, who here is basically just corrupt. There's Carmen, who's very crazy and very corrupt. There's Agnes, whose boyfriend is literally willing to die for her, though she regards it as an inconvenience when he does. There's a bookstore owner, "an intelligent Jewess," who doesn't play any real role. And there's Silver Wig, who is held up as an example of womanly virtue, since she stands up for her man. Marlowe actually approves of her, so he crowds her against a wall and kisses her, which she returns. Virtue magnetically drawn to virtue, I guess.

And that's where the whole thing starts to feel rotten to the core.

In this novel Chandler is bizarrely misogynistic. Carmen is the most obvious example. She's mad, bad, and dangerous to know, the end. Willful, childish, drug addled, and with some kind of psychosis that bears no relationship to anything I've ever heard of. She's so corrupt that when Marlowe finds her in his bed, naked, he tosses her out of his apartment, and rips out the sheets so he won't have to sleep in them and get, I suppose, bad girl cooties. Afterwards he complains that he woke up with a hangover, not from alcohol, but from women.

He's similarly homophobic, and goes on and on about it. It's hard to avoid the impression that the two go together, and that Chandler had some real personal problems. His biography seems to support that. Two of the women he knew best claimed he was a repressed homosexual.

Fine; everyone's got their mishegas. Assuming that Chandler's friends were right about that, it's certainly possible to feel some sympathy, since it was a bad time to be in that position. But Chandler's response here is to join the enemy, in a particularly nasty way. He attempts to sound worldly and knowledgeable about it, as if he's just explaining the facts of life. There's something corrupt in that, and it goes some way toward explaining why I've felt put off whenever I've tried to read Chandler, good a writer as he is. For all that posturing about how "down these mean streets a man must go who is not himself mean, who is neither tarnished nor afraid," there's something in Chandler, and in Marlowe, that feels a little shifty.

This isn't one of those tired arguments about whether or not particular racist or sexist attitudes were just artifacts of their time. Compare Hammett, for example. He's happy enough to show you corruption, but he's not self-righteous about it, his women aren't freaks, and he has a lot of gay characters, without making too much of it. Wilmer, Gutman, and Cairo in the Maltese Falcon, for example (the term "gunsel" that he uses didn't refer to a guy who carried a gun).

When Marlowe is shown as a paragon of virtue, it doesn't ring true. For example, at the end of the novel, Marlowe has been sapped and shot at, and he's killed a man, as well as saving General Sternwood's daughter from a murder rap. Yet he wants to return his fee, because he hasn't accomplished what he thinks Sternwood really wanted, which is something Sternwood explicitly told him not to look into. This comes off as a clumsily contrived way to show off how righteous Marlowe is. Methinks he doth protest too much.

The movie takes the good parts out of The Big Sleep and stays out of this Freudian morass, and it's a lot of fun. Far from having Chandler's queasiness about sex, it revels in it, and presents a happy plasma in which everyone is randy. If Marlowe takes a cab, it will have a good looking woman driver, and she'll ask him out. When Marlowe walks into a bookstore to keep an eye on the store across the street, the owner, played by Dorothy Malone, immediately closes the store. (Ah, Dorothy Malone ...) Whether or not it was because the movie censors wouldn't let Hawks mention that characters were gay, they fit into this supercharged atmosphere in a natural way.

The song that Lauren Bacall sings at one point is a bit weird, no question. But on the whole, the movie comes off as a lot healthier than the novel, and it steals all the best lines.

Absolutely loved it.
What a fascinating story. well read, too.
Chandler is the writer I would like to become some day. Clean, scorched, brutal prose. a surety of touch. An absolute lack of hesitation. Fascinating.

I really enjoyed this book. When I first bought this book I was concerned it would be difficult to relate to, due to the fact it was originally published in the 1930's. In fact, there were only a couple things that made it seem "old":
1) Cigarettes, they were smoking everywhere.
2) prohibition has recently ended
3) An abundance of derogatory slurs towards homosexuality.
The 3rd was the only thing that really bugged me about the story. Though not enough to really take anything away from my enjoyment, more of an annoyance. This aspect has a similar feel to H.P. Lovecraft and his racist comments throughout his works, if you are familiar.

Ray Porter is a fantastic narrator. In fact, I found this book by searching for Ray Porter on Audible. He always gives a solid performance, this was no different.

If you're a fan of books like Lee Child's Jack Reacher, you will like this book. Philip Marlowe, the novel's main protagonist, operates very similar to Reacher. The differences being Marlowe is less violent a character, and he is an actual Private Detective.

All in all, a good story with great narration. Highly recommended.

Some really excellent storytelling and top notch narration. Hard boiled classic, I see why he's been so influential, and it holds up REALLY well. Will buy more in the Marlow series.