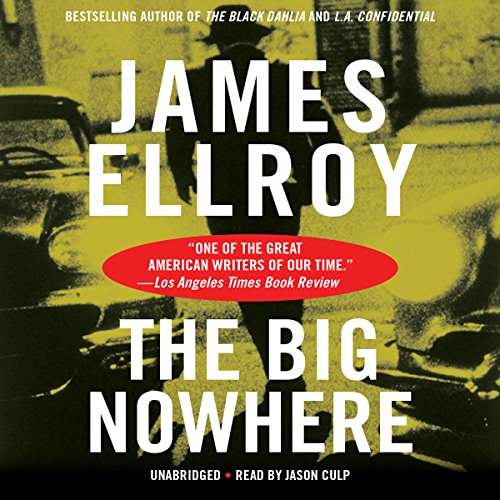 Danny Upshaw is a sheriff's deputy stuck with a bunch of snuffs nobody cares about; they're his chance to make his name as a cop...and to sate his darkest curiosities. Mal Considine is DA's bureau brass. He's climbing on the Red Scare bandwagon to advance his career and to gain custody of his adopted son, a child he saved from the horror of postwar Europe. Buzz Meeks - bagman, ex-narco goon, and pimp for Howard Hughes - is fighting communism for the money. All three men have purchased tickets to a nightmare.

Best of the LA Quartet

This was the best of Elliot's LA Quartet IMO, superbly wrought and emotional in its tragic conclusion

ALL you want out of LA Noir.

“It all came down to money - the great equalizer and common denominator.”
― James Ellroy, The Big Nowhere

Probably 4.5 stars. I'm leaving room, saving stars, minding the gap, because I KNOW this isn't Elroy's best. Still, it is a novel that if written by any other living crime writer it might be considered their masterpiece and this is only 2nd shelf Ellroy. Chew on that. This is the 2nd book in Ellroy's LA Quartet Series (Starts with The Black Dahlia and includes this, L.A. Confidential, and White Jazz). It really has all you want out of LA Noir. Hollywood, homosexuals, drugs, jazz, sex, the Mob, crooked cops, etc. The plot is near perfect and the characters are BETTER than the plot, in my book.

James Ellroy does for crime thrillers what John le Carré does for spy thrillers. They both have made their own corner of genre fiction literary. Both will be read in 400 years as future academics and fans try to tease out how exactly how f'ed-up the 20th century really was.

Just the right combination of booze, babes, and bullets to keep any hardcore detective fiction fan happy. Not for the faint of heart or for those easily offended by 1950's racism, sexism, or homophobia.

Once it starts to click, it doesn't let up. My Favorite of the LA quartet.

Dark and sleazy side of 1950 Los Angeles

Ellroy's second book in the L A quartet is dark, mean, ugly, sleazy, and gripping. It is hard to read because of its complete lack of political correctness. The attitudes toward the gay community, and people of color are hard to take. In 2019 it is shocking to read. However, it feels true to the time and the characters.

The crime is horrific. The city is presented at its worst. This is not the 1950s as presented by Ozzy & Harriet. This is not the "good old days" described by my elders. Ellroy's books are deeply cynical and a bit angry. I feel as though he has punched me in the gut after I finish his books. And, although I am in no way a cynical person, I am also not naive. I know that this side of the world exists and I find Ellroy's descriptions of the seedy side of the street gripping and thrilling. Unputdownable.

After reading all the positive reviews and enjoying Black Dahlia I had high expectations for this book. Unfortunately, I was disappointed. I managed to finish book as I like Ellroy's descriptions and writing style. However, story was borderline nonsensical. Perhaps it is better in print.

one of elloy,s best a definite classic a must read for any crime book lover

Ellroy’s Best? Could be!

I think it is. Some of the subject matter is pretty horrifying but Ellroy creates a sense of pathos and tragedy that i feel he has never equalled since. This is the first triple-protagonist Ellroy book and the most successful with possible exception of LAC.

Culp is fantastic. The old BOT version was pretty mediocre and Culp has given a great performance, possibly the best Ellroy narration other than Wasson’s Cold Six Thousand.

Ellroy's capacity to insert his readers into the fevered thoughts of The Obsessed should be regulated by the FDA! Do not operate heavy machine when using. In case of erections, seek immediate psychiatric assistance!

Great story to listen to on headphones, would not recommend speakers at work, lol! great character builds, definitely worth listening to!!