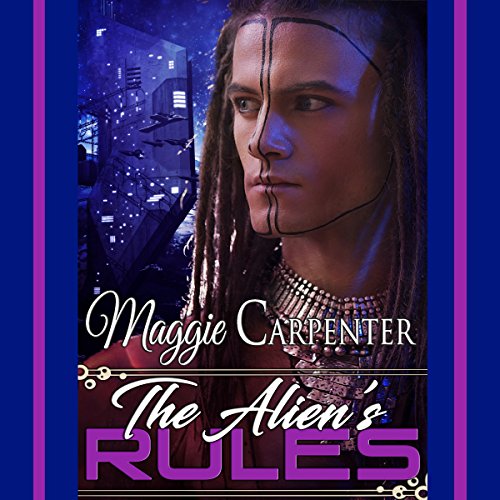 After several months of exceptionally vivid, wonderfully sexy dreams in which she is visited by a mysterious stranger who punishes and pleasures her as he sees fit, one night Ellie awakens to find herself in an unfamiliar place. She is lying naked on a table in an odd, purple-lit room, exposed and vulnerable, and the man who looms over her is devastatingly handsome yet definitely not human.

Introducing himself as Valodar, he gently explains that he is an alien from another world and he has been visiting Ellie in what he calls the dreamscape. Certain that she is the perfect woman for him and wanting her to experience life as his mate, he invites her to stay with him, but he makes it clear that she will have to submit to him completely.

Though his warning that she will be thoroughly spanked for any disobedience gives Ellie pause, Valodar's mere presence leaves her yearning for his touch and she cannot resist accepting his offer. She quickly discovers that Valodar possesses unique physical traits, and he sends her tumbling into one shattering climax after another, claiming her more thoroughly than she would have ever thought possible.

But even as love begins to blossom between the dominant alien and the feisty human girl, their growing passion is interrupted when the Earth suddenly falls under threat from a cunning and ruthless alien race. Valodar insists that she must leave the matter in his hands, but can Ellie sit idly by while her world is in peril?

my eyes have never rolled this much in my life. They are actually sore from all the strain.

The H is a sadist arrogant that never redeems himself to me the h is a whiny stupid toddler type that does STUPID things and then after being whipped by the H (trust me this is not spanking, it's whipping with enhancers to make the pain last for days) and our silly female lead does what so many abused women do and ends ups agreeing that she deserves the abuse and gladly accepts the punishment and thanking the male lead for whipping her. Sorry, this feels like a wasted 5+ hours of my life I'll never get back but also I was the one that kept listening and hoping that I was just not getting the whole thing. Noone made me continue listening and I count it as a giant lesson learned. Many may truly enjoy this but I'll never listen to this author again and I wish her nothing but the best.

I asked to receive this Audible book and voluntarily left this review. Maggie Carpenter has created a story of alien seduction, warriors with unique endowments, dominant aliens, a story with twists and turns, a sassy and smart heroine, spankings, sizzling hot sex scenes, and love. She has quite the creative mind. Wish one of her aliens would visit me in my dreams. She also chose the perfect narrator for this Audible book. Rob Groves' voice is so smooth and easy to listen to. He has distinctive voices for both male and female characters. I highly recommend this Audible book.

Ellie thought she was having the most important erotic dreams believable. But then she was having them awake. She woke up with a beautiful man, but he wasn't a man. They had the most amazing sex. Valodar started telling her his rules and the consequences if she disobeyed. All of them started with a spanking. Some where pleasurable, but alot were not. Ellie realized she loved Valodar and decided to stay with him. Be become his mated pair. This is a testament of following through with what you say and mean what you say. Plus, she had a curious mind that saved the day. This was well written and gloriously narrated. I give five stars to All levels!

A girl and her Dreams can be as wicked and yummy as she wants to make them ...Right ? But not for Ellie , the spice of her life in Dreams becomes a Real Live Huge big beautiful man but with the Purple background and six fingers . This book does have vivid sexual scenes with a liberal sprinkle of spankings. Please do NOT buy if this offends you .🌺

Let’s your imagination go to the stars!

The build up is slow, but the descriptions take your mind to other worlds! Strength is shown in different ways for each character and it makes you love them more!

Ellie comes off as a bratty teen.

The dialog is like listening to a dirty Peppa the Pig. So odd! Not my cuppa tea.

Couldn’t even get passed first couple of chapters. Narrator was horrible and book was just stupid.

Valodar is a soft hearted alien with honor hard as steel. These are the things Ellie, an earth woman, needs to survive in his world. This story has a twist I've not seen in an alien genre before and endeared these two to me.

A hot alien romance was a fun book to listen to. Rob Groves did a pretty decent job of being both a male and female voice. Ellie has spent months dreaming of her alien lover only to find out that it was real. The steamy scenes were a trip lets just say as an alien he has some special talents and leave it at that. There is action and danger too for our hero and heroine will they save themselves or earth? If you like steam and Maggie Carpenter then this a great book to have in your collection.