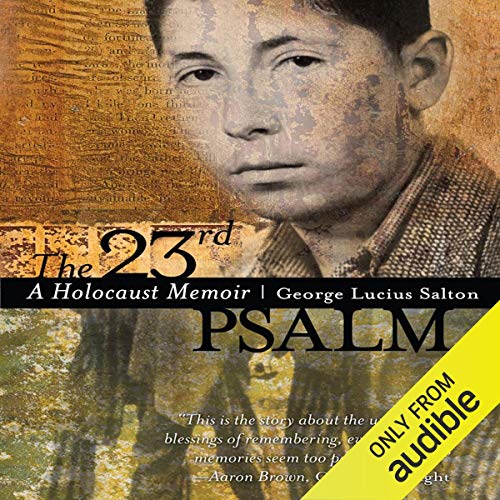 In September, 1939, George Lucius Salton's boyhood in Tyczyn, Poland, was shattered by escalating violence and terror under German occupation. His father, a lawyer, was forbidden to work, but 11-year-old George dug potatoes, split wood, and resourcefully helped his family. They suffered hunger and deprivation, a forced march to the Rzeszow ghetto, then eternal separation when 14-year-old George and his brother were left behind to labor in work camps while their parents were deported in boxcars to die in Belzec. For the next three years, George slaved and barely survived in 10 concentration camps, including Rzeszow, Plaszow, Flossenburg, Colmar, Sachsenhausen, Braunschweig, Ravensbrck, and Wobbelin.

Cattle cars filled with skeletal men emptied into a train yard in Colmar, France. George and the other prisoners marched under the whips and fists of SS guards. But here, unlike the taunts and rocks from villagers in Poland and Germany, there was applause. "I could clearly hear the people calling: 'Shame! Shame!'... Suddenly, I realized that the people of Colmar were applauding us! They were condemning the inhumanity of the Germans!" Of the 500 prisoners of the Nazis who marched through the streets of Colmar in the spring of 1944, just 50 were alive one year later when the U.S. Army 82nd Airborne Division liberated the Wobbelin concentration camp on the afternoon of May 2, 1945. "I felt something stir deep within my soul. It was my true self, the one who had stayed deep within and had not forgotten how to love and how to cry, the one who had chosen life and was still standing when the last roll call ended."

A Gift to All of Us

I've read and interviewed many witnesses to the Holocaust about that time in their lives, and there is always another story that defies belief, both in humanity, and survival.

This is one of those stories, a very poetic one, too.

I just didn't stop listening, moist-eyed, until the end, when we learn how he finally shared his experiences with his children, after shielding them for most of their lives.

I was also one of those children whose parent had a terrible historical secret. It moves me so much when parents come around and open up.

He couldn't have written this book if it hadn't been for that reconciliation, and it's a gift to all of us.

this book was fascinating. amazing story about a Survivor and the will to live. the book is a very interesting insight into this incredible man's first hand account of the Holocaust. it also blew me away to really consider the scope of prejudice amongst the German people of the time.

the voice actor was horrible. he has a voice that would be great for reading short clips on the news or radio but came very close to ruining this book for me. after the first hour or two I got used to it it was able to focus on the story but there was a moment where I almost couldn't continue with the book. it sounds as if a robot is reading it to you and there is no emotion placed into these outrageously emotional moments of the story.

I found this book tremendously moving. The performance was a little difficult to get used to at first, but it grows on you. As another reviewer said, it is hard to remember that the narrator ia not actually the young boy. This book is raw, and full of emotion . If you are a fan of this type of history , then you will love this one

I could not stop listening!!!

Such a heartbreaking story, but also a story of survival. I think we can learn a lot from these stories.

What was one of the most memorable moments of The 23rd Psalm?

I can't pinpoint just one. His choices were sort of a domino effect. You get to points in the book where you say to yourself, "wow, had he made one different decision he would not have survived". Its powerful.

He made me feel as though he was the author telling the story.

I cried in a few places in the book.

A must read, especially if you enjoy memoirs!!

All the Passion of a Newscast

Would you try another book from George Lucius Salton and/or Ken Kliban?

I might consider a book by George Lucius Salton, but I would definitely not buy a book narrated by Ken Kliban.

Obviously, the content of the Holocaust is compelling in and of itself. As a teacher, I've read several paper-copy books on this subject and have even heard Henry Golde (Holocaust survivor) speak in-person. That said, the story is coming off more like a series of sentences, rather than a memoir. In the author's defense, I'm not sure it's because of the narration or something else, since I'm obviously listening, rather than reading.

Ken sounds like a very nice man, but a man with little emotion; this book has all the passion of a nightly newscast. I'm on Chapter 6 and am just hoping that someone else will be narrating, too. Otherwise, I'm not sure I'll finish it. I've listened to to other books this month and found them to be much better; the narrators changed their voices to sound younger when reading parts of younger characters. Ken's reading, while sincere, lacks inflection/tone to match the content, in my opinion.

The book isn't sparking anything beyond general interest, at this point.

I would like to hear a boy's voice (or an effort to sound younger, at least) for the parts of the author's childhood.

One of the best holocaust books I've read.

What made the experience of listening to The 23rd Psalm the most enjoyable?

What was one of the most memorable moments of The 23rd Psalm?

He seemed to capture the youth of George.

It seemed bad news followed bad throughout till the end when he was rescued.

I don't really understand how he survived all he went through

I wish I knew the time line better but he didn't have way of knowing it
Remarkable story in itself especially In one so young But he seemed to never give up or give in to the absolute cruelty of the Nazi soldiers.
He is a true hero. Highly recommend this audible book

Hard to listen to in more than one way.

The narrator is horrible. At times he sounds mechanical. Zero compassion in his reading. Just reads each sentence. Very hard to listen to him. I would suggest reading this one.
The story....how to do you say it's good when it's about the holocaust? It's very well told. I couldn't stop listening to hear how he survived the horrors of the SS and what became of his family. Very sad.

I loved this book. the author was incredibly detailed in his life from beginning to end. it was eloquent it was beautiful and the end made me cry

Tears that fill the oceans bring life to all who live within each drop. That which is dispicable to you, do not do to your fellow, that is the whole Torah, the rest is commentary. Now that you learned from the past, go live it and do not forget it.