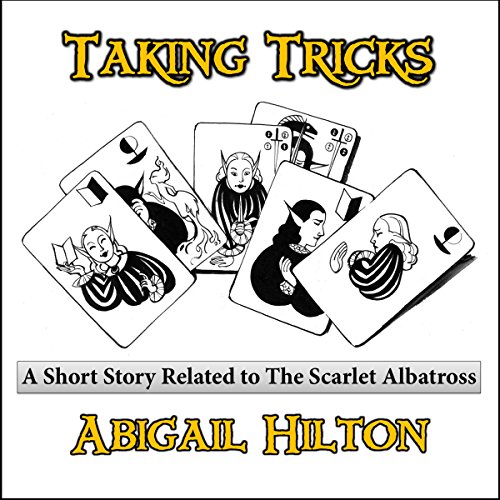 Silas Ackleby is an 18-year-old airship sailor, currently sleeping in the woods as he waits for the airships to begin their spring hiring. He's had a run-in with a pickpocket, leaving him with barely enough coin to gamble for his breakfast. Fortunately, Silas rarely loses a card game. He's displeased, however, to find that the only game going involves a partner, chosen by random drawing. He's even more displeased when his partner turns out to be a wealthy student from the airship academy named Percival Bellwater. Silas is ready to strangle Percy within moments of meeting him, but Percy is less feckless than Silas originally assumes. He sweeps Silas up into a day of whirlwind plots that involve much higher stakes than breakfast. Their adventures and misadventures will change the course of Silas's life.

Taking Tricks is a prequel story to The Scarlet Albatross. You can enjoy this story even if you have not heard Albatross. This story is also related to The Guild of the Cowry Catchers series.

Percy and Sylis sets up the story

loved it, the voice actors were fantastic. best listened to before the scarlet albatross and jager thunder.