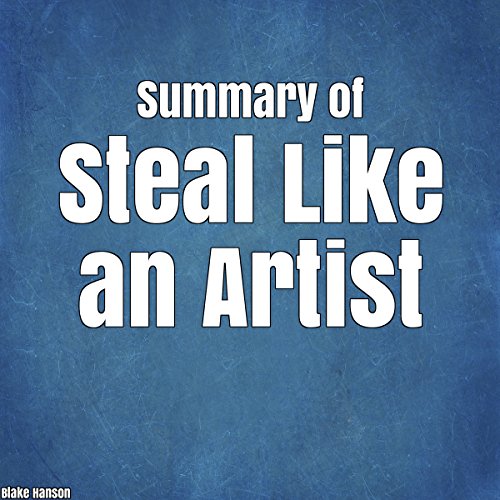 In his 2012 book, author Austin Kleon approaches an often-considered taboo subject of the world of creative works: copying another's work. While most consider the idea of copying another's style or design to be wrong, Austin says it doesn't have to be. Instead, Kleon suggests that the best creative ideas come from building off of ideas that others have already had.

Kleon suggests that creativity is everywhere and is for everyone, so even if you don't feel like you are as great of an author, painter, photographer, or whatever your chosen medium may be, you should still learn from the best and try your best to imitate their work. This, he says, is how everyone finds their own individual style. While discussing what he calls “the inevitability of influence,” Kleon tells his listeners to “live outside the vacuum,” and just to have fun with their art. He says there is no such thing as an original idea in today's creative world. Instead, every artist is merely taking ideas from one another and adding their own stylistic elements.

“You don't need to be a genius,” he says. “You just need to be yourself.” Throughout the book, which is organized into eleven major subheadings, Kleon tells us to create what we would enjoy in the hope that someone else will enjoy it, too. Instead of creating something popular or trendy to cater to the masses, we should instead simply create to please ourselves. After all, new trends are forged when people are willing to step outside of the box. The book is an easy and fun listen and suitable for young adults as well as more seasoned artists.