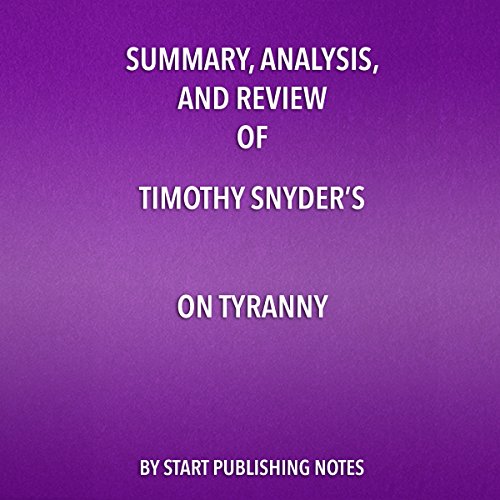 Summary, Analysis, and Review of Timothy Snyder's On Tyranny

Please Note: This is a key takeaways and analysis of the book and not the original book.

Start Publishing Notes' Summary, Analysis, and Review of Timothy Snyder's On Tyranny includes a summary of the book, review, analysis & key takeaways, and detailed "About the Author" section.

Timothy Snyder's On Tyranny is a primer on what people can do to resist tyranny. It also provides tools for recognizing tyranny and discusses historical background on how tyrannical governments have been established in the past. Snyder mostly uses examples from twentieth century Europe, particularly from communist and fascist regimes, to illustrate his arguments.

The United States was founded as a response to and a rejection of tyranny. American history and European history provide resources to recognize tyranny and combat it. History also shows that democratic traditions do not necessarily protect a nation from tyranny. Democratic movements after World War I, World War II, and following the collapse of communism were often unsuccessful. The fact that tyrannies often triumph should warn democratic citizens against complaisance.