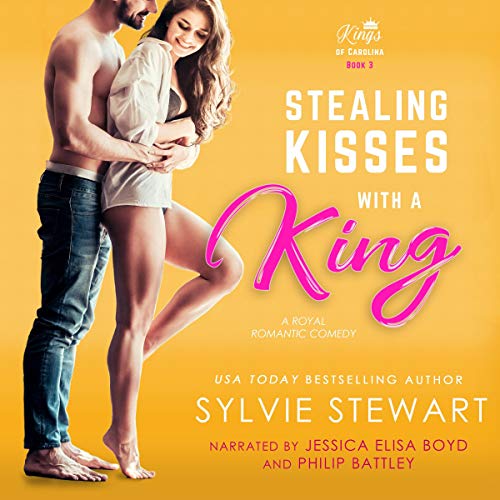 Stealing Kisses with a King

He makes my heart do the tango, and my head wants to explode. In other words, it’s just another day working for Prince Malcolm.

Give me a problem and I’ll fix it. That’s what I do. The trick is remaining calm and preparing oneself for any eventuality. But even I failed to anticipate my former boss Malcolm crossing an ocean to bribe me for my help.

He insists I’m the only one who can fix his problem, but I had an excellent reason for leaving that job in the first place and putting an ocean between us. It’s hard to keep the big picture in mind when you’re secretly in love with your boss. And even harder when he’s about to be crowned a king.

Being a prince certainly has its perks: money, cars, women, and a license to do just about anything I please. But since my assistant Alice resigned out of the blue, I’ve been unable to find my footing and have admittedly been a bit cranky.

When a problem arises calling for the utmost discretion, it’s clear Alice is the only woman for the job. But she’s less than thrilled at being coerced into returning, and she’s doing her best to make me pay for it. With the clock ticking down to my coronation, I’m putting all my trust in her to see me through. But the stakes are getting higher because Alice is beginning to look more like my future than even the throne I was born to take.

Stealing Kisses with a King is book three in the Kings of Carolina series. It can be enjoyed as a stand-alone but is swoonier (yeah, I made that word up) when listened to in order.

Always love Sylvie’s romantic sexy comedy. Thanks for a fun read! And these narrators were terrific.