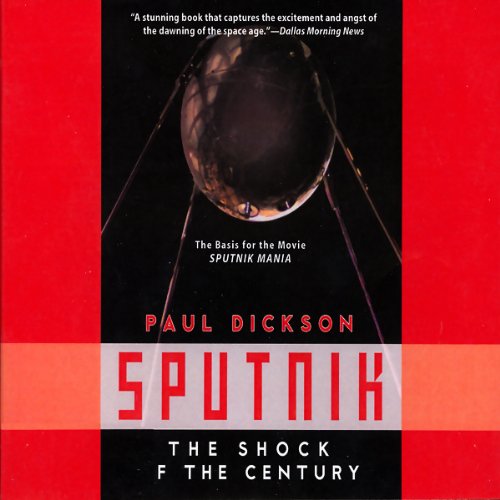 On October 4, 1957, as Leave It to Beaver premiered on American television, the Soviet Union launched the space age. Sputnik, all of 184 pounds with only a radio transmitter inside its highly polished shell, became the first man-made object in space. While it immediately shocked the world, its long-term impact was even greater, for it profoundly changed the shape of the 20th century.

Washington journalist Paul Dickson chronicles the dramatic events and developments leading up to and emanating from Sputnik's launch. Supported by groundbreaking, original research and many recently declassified documents, Sputnik offers a fascinating profile of the early American and Soviet space programs and a strikingly revised picture of the politics and personalities behind the facade of America's fledgling efforts to get into space.

By shedding new light on a pivotal era, Paul Dickson expands our knowledge of the world we now inhabit, and reminds us that the story of Sputnik goes far beyond technology and the beginning of the space age, and that its implications are still being felt today.

"Dickson...completely understands the lure and lore of Sputnik and has done a solid job of synthesizing prior books on the subject." ( Publishers Weekly)

Out of this world

This is an excellent accounting of the effects of Sputnik on sciene and politics. It does not have much technical information but rather focuses on how Sputnik penetrated the minds and hearts of americans. The accounting also describes the 40'', 50's and 60's which provides a nce walk down memory lane of those times.

If you remember bomb shelters, the cold war and Krushchev banging his shoe at the UN, you will enjoy this fascintating story.

Describing America's moon program, the narrator described Apollo 2's trip to the moon in 1969. Apollo 2? It took me a few seconds to realise that he misread Apollo 11. After that blooper, I just couldn't take the rest of the book seriously. What's the audio equivalent of a proofreader?

You won’t be disappointed.

Great insight into how the world has changed from this event. I would recommend this book to anyone looking for more knowledge on this subject.

More about social impacts then anything else

Not a bad book, but I expected more science and techology focus. Very focus on the social impacts.