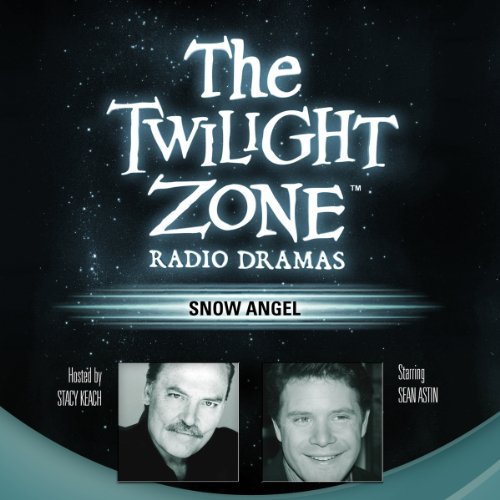 At Christmastime, a pregnant teenage runaway finds herself in the care of an elderly grandma-type who is an independent, practical, tough-minded recluse living in a remote part of South Dakota.

Excellent Christmas Story for Any Time of the Year

I would recommend this story to anyone who loves a well crafted story, one that makes you feel good. I must admit that I was a bit skeptical about listening to a Christmas story in August, and since it was a story that takes place in The Twilight Zone, I really didn't know what to expect. A young man, his wife and their little daughter are taking a flight on Christmas Eve to visit his mother who lives in a remote area in South Dakota. Their flight is grounded due to a bad snow storm, and they apparently have to spend Christmas Eve in a hotel room, and their grand daughter, who in her innocence is attracted to a man who is dressed in angel costume. The story is cleverly constructed with many little plots intertwined and interesting characters. They all are connected to each other, and each contributes to the outcome of the story. The story is grounded upon the man who is is dressed as an angel, who ties all of the strings of the plot together into a beautiful Christmas bow as the story reaches its ultimate conclusion. I found the story to be very enjoyable, and I have to say that is one of the best short stories that I have ever listened to. Rarely, if ever, do I want to listen to or read a story again, but I can see myself enjoying this one again in the future. I have been buying individual stories from The Twilight Zone Radio Dramas. Some, like this one, are just forty- eight cents. Very rarely if ever do you get very much for that amount these days, and this story is worth a whole lot more than that. Although these stories are not the original Twilight Zone stories written Rod Sterling, they are inspired by the series, and they are dramatized for listening featuring a cast of actors, some who are well known. I have listened to many of them, and I have enjoyed them as much and in this case, even better than the originals.

What was one of the most memorable moments of Snow Angel?

Nothing really stands out to me a defining moment since there was so much of the story that I enjoyed, but I think that I enjoyed it most when I could see all of the elements of the plot coming together near the end. That was the most enjoyable part for me.

Which character – as performed by full cast – was your favorite?

I enjoyed the character of the man who was dressed up like any angel.

I did not have an extreme reaction. Mostly, for me there was a feeling of enjoyment and admiration at how the writer had all of these characters and plots intertwined and then everything coming together perfectly in the end.

I did not expect to enjoy this story so much, and I was pleasantly surprised at how much I actually did enjoy it, so much so that out of all of the Twilight Zone Radio Dramas, this was the one that I enjoyed the most. It left me with a feeling on pleasure which lingered, and it made me want to go back through the others and find more enjoyable stories.

Where does Snow Angel rank among all the audiobooks you’ve listened to so far?

This story ranks at the top of the twilight zone recordings I've heard so far.

to loud to much noise I hate that I have to put 15 words.

So bad it's good

This was so bad in terms of both plot and performance that it took me right past "man, should I return this? Is this bad enough that I want my 35¢ back?" and around to "This is so bad it's hilarious and I love it." Welcome to my list of Garbage Christmas Classics, Twilight Zone Snow Angel.

this particular story was a great listen. and I love how there are so many actors doing these stories. addicted to these. it's almost like the show used to be but now I can listen in the car without the need of watching a screen.

Leave it to the Twilight Zone to make Christmas, well, unusual to say the least! I cannot say it enough, these short audio books are incredible for my work commute, perfect length and five star performance and stories by some of the best around! Thanks to all @ AUDIBLE!

Too much lag time in the story/performance

I think the story would've been better if there was not so much time wasted in between the change of scenes. You hear several seconds of music when they switch between each set of characters. That was too long without words and story continuation. I didn't like this one that much.

Twilight Zone series is the best

I really enjoy the series. Best buy for the price. I'll be listening to all of them. Great going Audible.

Oh, the weather outside is frightful...

But the story inside is from the twilight zone,
With messages from the Angels of Christmas,
The story has many threads to follow along,
Yet they all seem to say: 'be kind on more than Christmas Day'

What a beautiful story

This was one of the best Twilight Zone episodes. A truely beautiful story. Very positive.