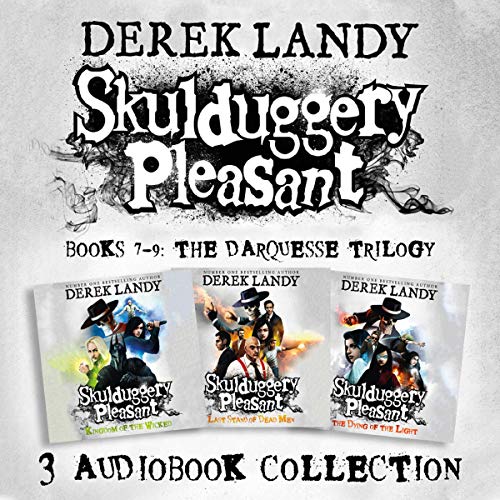 Kingdom of the Wicked

Across the land, normal people are suddenly developing wild and unstable powers. Terrified and confused, their only hope lies with the Sanctuary. Skulduggery Pleasant and Valkyrie Cain are needed now more than ever.

War has finally come, but it's not a war between good and evil or light and dark - it's a war between Sanctuaries. Allies turn to enemies, friends turn to foes, and Skulduggery and Valkyrie must team up with the rest of the Dead Men.

The Dying of the Light

The War of the Sanctuaries is over, but not without its casualties. Following the loss of Valkyrie Cain, Skulduggery Pleasant must use any and all means to track down and stop Darquesse before she turns the world into a charred, lifeless cinder.

Changing in between books not possible

First of all I Love Skulduggery, it is great, the language brilliant and Derek Landy, thank you for hours of good reading / Listening,
But this Audio Collection is simply anoying, I dont know it might be me, but it is not possible to start with last stand of the Dead man, as you cant find the begining of the single books. Evenmore though as the single books are not recorded one by one but in a row. So you simply do not know where you are. And if you start for example Part 5, which should be the last book it starts with kingdom of the wicked again. I hate this. I want to choose, which book I listen to, Especially as I do not like Kingdom of the wicked that much.
Sorry. I will give it a last try and then I will decide what to do. It is anoying.