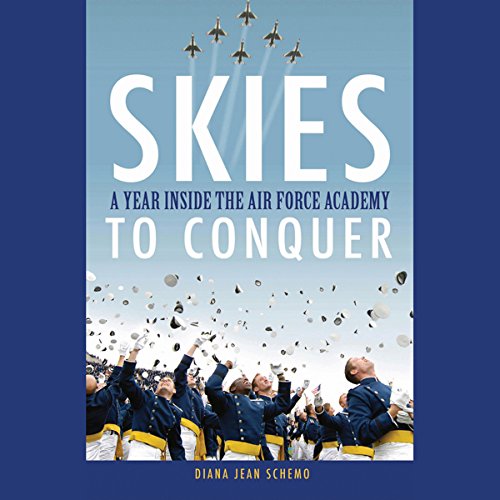 Skies to Conquer: A Year Inside the Air Force Academy

Skies to Conquer: A Year Inside the Air Force Academy

A former New York Times reporter's year behind the scenes at the scandal-ridden Air Force Academy.

Diana Jean Schemo covered the Air Force Academy's sexual assault scandal in 2003, one of a series of academy embarrassments that have included drug use, rape complaints, and charges of evangelical officers pushing Christianity on cadets of all faiths. Today, the institution is in flux - a fascinating time to look at the changes being made and the experience of today's cadets.

Schemo followed a handful of academy cadets through the school year. From the admissions process and punishing weeks of basic training to graduation, she shares the triumphs and tribulations of the cadets and the struggle of the academy's leaders to set their embattled alma mater on a straighter path.

Like David Lipsky's successful Absolutely American: Four Years at West Point, this book offers a fascinating window on the training of our military today. But Schemo's book updates the story: the seniors were the first class to sign up after the attacks of 9/11, and the road to graduation, this time, leads to an America at war.

I loved it, gave very useful insight into my first pick for post highschool. Go Falcons!

Started strong but lost a bit of its luster in the end. Seemed to focus on one or two cadets. Would still recommend it. Interesting look at academy life the first year.