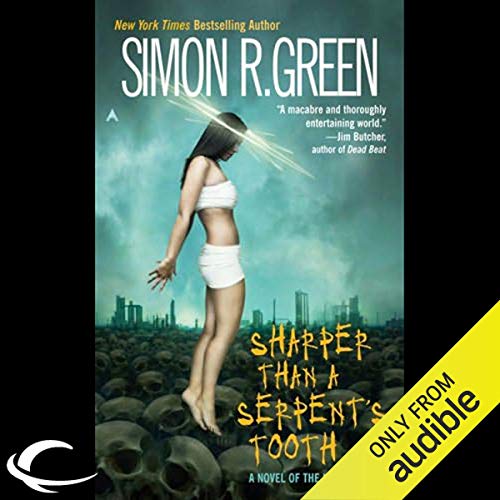 Sharper Than a Serpent's Tooth

The name's John Taylor. I'm a PI for hire in the Nightside, the dark and corrupt city within the city of London. Where the sun never shines and where pleasure and horror are always on sale - for the right price. Not a nice place to visit or a nice place to live. So you wouldn't think I would care that it was about to be destroyed, but none other than my very own long-missing, not-quite-human mind.

But I do. I was born here, I live here, and I got friends here. They might not be acceptable in polite company, but they're my friends nonetheless. I know that I'm the only one who can stop her. The trick is, how to do it without fulfilling this prophecy that says whatever action I take, not only is the Nightside doomed, but the rest of the world will soon follow...

"This is Green's tour-de-force culmination of the Nightside books. Anyone who's enjoyed the series to date absolutely must read this installment" - SF Revu"It's packed with action and dark humor" (Romantic Times)

I would but I would say since its part of the series they need to start with book one. Without the previous five it wouldn't make a lot of sense.

If you’ve listened to books by Simon R. Green before, how does this one compare?

The world he creates is as vivid, deep and alive as always. This book though I feel relies too much on unexpected twists and convienent turns of luck.

What does Marc Vietor bring to the story that you wouldn’t experience if you just read the book?

The accents of the characters I think. That's something I seldom hear when I read or if I do the ones I cook up are over the top.

Probably who John meets in the ruins of the library. Spoilers :p

I love the characters in this series and it is always love listening to Simon R Green's books. They are fun and exciting and always a great listen. I love the narrator as well, he really brings the characters alive.

Like the previous two Audible unabridged audiobooks I reviewed in the Nightside series, Hex and the City and Paths Not Taken (which form the first two parts of the Lilith story line in Green's ongoing series), it turns out that I had not read Sharper Than A Serpent's Tooth before listening to it this past fortnight. I have absolutely no idea how I managed to miss reading this entire trilogy of novels but the end result was that I approached Sharper Than A Serpent's Tooth not knowing anything at all as to how Green would resolve the Lilith story. Yes, I knew both Taylor and Nightside survived -- with a fair amount of damage to both I'll admit -- Lilith and her crusade to remake the Nightside in Her Image, but not how. What I noticed this time is how good Green is at creating an alternative version of present-day London in a much stranger reality than ours. For example, well into the story here, there's an extended scene involving enslaved fairies working in a sweatshop that's straight out of the absolute worse excesses of Victoria's Empire. Again, I must note that listening to these stories is certainly the best way to get the full feel of what Green's depicting. The Lilith War trilogy of books represents the longest single work in the Nightside series so far with Sharper Than A Serpent's Tooth wrapping up this story quite well. As an audio experience, the Lilith War trilogy is very close to twenty-five hours of Really Fantastic Entertainment for any lover of fantasy. Cat Eldridge / Green Man Review

Great read I am a fan of the writer Mr. Green and the narrator Mr. Vietor.

These books are like a warm blanket.
We know the players and the catchphrases, but that's part of the charm.

I'll meet you at StrangeFellows and we can watch the world go by.

On of the best in the series!

Excellent read, Wonderful listen!! I think this one is one of my favorites in the series.

the story is amazing and Marc brings it all together in a wonderful way... stunning

John and company need to win a war against his mother if the Nightside is to survive. Another great book in this series. And I really appreciate that Simon finished this arc in this book rather than dragging it out.

If you could sum up Sharper Than a Serpent's Tooth in three words, what would they be?

Urban Fantasy at its Best, the noir detective with magic, gods, demons, angels, fatal females, grumpy bartenders and a man in a bowler hat. In this book find out how the mother of all monsters comes into play as a bad mother too have.

Which character – as performed by Marc Vietor – was your favorite?

The main character, he did the internal monolouge very well.

Magic, Mayhem, and the Mother of all Monsters...Welcome too the Nightside.

Seriously, read it, listen too it. You'll love it!

Visit the Nightside of the future

In Sharper Than a Serpent’s Tooth, the sixth novel in Simon R. Green’s NIGHTSIDE series, John Taylor and Suzie Shooter have just returned from the past where they discovered the origin of John’s mother, Lilith, and witnessed the birth of the Nightside. Now that they’re back in the present, they are determined to stop Lilith from destroying what she created and remaking the Nightside in her own image.

First they must rescue John’s secretary, Cathy, who has been kidnapped. Then John wants to raise an army that they hope can stop Lilith, but he’s haunted by visions of a future where he has destroyed the Nightside and his friends, so he decides to travel forward in time to get some answers. Perhaps if he knows the future, he can change it.

Besides the future, the other interesting places John visits include the cellar of Strangefellows, Rotten Row, Simulacra Corner, the Necropolis, a faerie sweat shop, the Bazaar of the Bizarre (a reference to Fritz Leiber’s LANKHMAR books) and the Street of the Gods (another Lankhmar reference). Along the way he gets help from and/or pisses off a lot of the strange characters we’ve already met, and some new ones, too. There’s Alex Morrisey, Kid Psychoses, Tommy Oblivion, Sneaky Pete, Razor Eddie, Sandra Chance, The Collector, The Little Sisters of the Immaculate Chain-Saw, dancing ghost girls, the Carrion in Tears, Dead Boy, Julien Advent, Jessica Sorrow, Count Video, King of Skin, the Doormouse, the Engineer, Walker, the Beadle, Merlin Satanspawn, and the Lord of Thorns. He even meets the guys in suits who run the Nightside on the backend.

Eventually there’s a huge long battle when Lilith appears on the Street of Gods and everything blows up. This becomes so furiously paced, so “epic,” and so over-the-top that it is actually dull. Green hits us with everything and everyone at once — each person is more powerful than the person mentioned before, wiping away enemies with their vague superpowers such as “undoing probabilities and spreading nightmares” (what does that look like?). For all the build-up, it was a little disappointing, mostly because the action was so frantic and intangible. This part of the story, which was the climax, had little tension or impact, though several characters die. (I’m not sure if they’ll stay dead.)

In previous reviews I’ve complained about the repetitive language in the NIGHTSIDE books. It’s a little better here. Green continues to entertain with his imaginative characters and John Taylor’s amusing voice: “You here to cause trouble?” he said in a voice so deep that he must have had a third testicle tucked away somewhere.

Sharper Than a Serpent’s Tooth ends a major plotline in the NIGHTSIDE series. I can’t say I’m sorry since I was getting tired of Lilith. I’m looking forward to getting back to John Taylor’s private investigations in the next book, Hell to Pay. I’m listening to Marc Vietor read the audio versions. He’s fabulous.