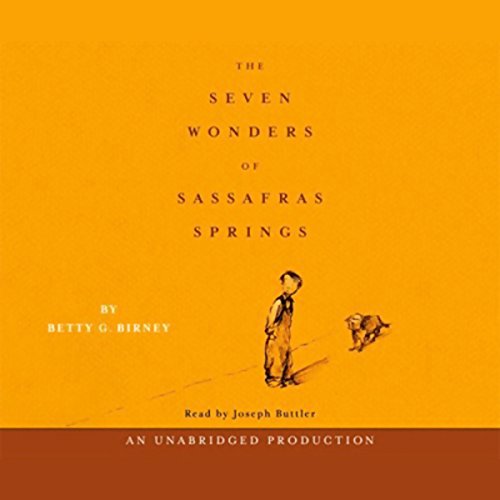 When Eben McAllister reads about the Seven Wonders of the World, he longs to escape the small farming community of Sassafras Springs and do some exploring of his own. No one else ever seems to want to leave Sassafras, however, not even his best pal, Jeb, and so, for now, Eben figures he's stuck on the farm with Pa and Aunt Pretty until he grows up.

All that changes when Pa, tired of Eben's moping, challenges him to find the Seven Wonders in Sassafras Springs that can stand up to the real Seven Wonders of the World. And if he does? Then Eben will get the adventure he's been craving: a trip out west. Eben doesn't reckon he'll have any luck; he can't think of even one thing that could be called "interesting", let alone wondrous, in Sassafras, but he figures he'll give it a try.

Told in a down-home narrative with glimmers of magical realism woven throughout, Betty G. Birney's tale about a boy's journey of discovery reminds us all that extraordinary things can happen in the most ordinary of places...even Sassafras Springs.

A pleasure for the whole family

Seven Wonders of Sassafras Springs was enjoyable for our whole family (6 year old, 8 year old, 12 year old, mom and dad.) The performance was great and the pace of the story was just right, it was like sitting in the room listening to a storyteller. This book inspired us to look around us for our own "wonders". I recommend this story for young and old.

great story to read aloud with your 7 yr old, or to read together with an older child. My 9 yr old and I read it for our Mother Daughter book club.