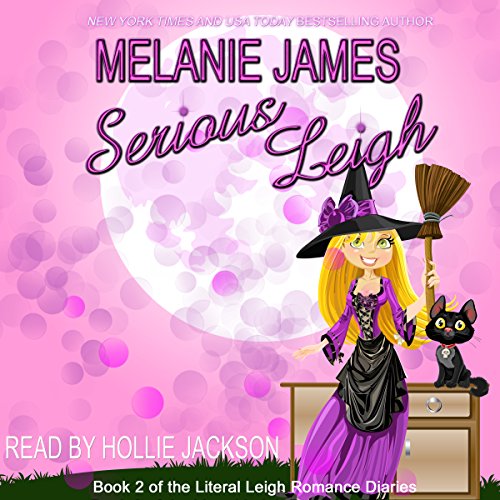 Oy vey! Shit just got serious in Chicago. The Witches Union has discovered that Leigh Epstein has been dabbling in the dark arts, and now they want to become creative editors for Leigh's paranormal romance, "Four-Bitten Fangtasy", a book about a shape shifting-werewolf-vampire hybrid named Vlad. They definitely have something up their sleeves and they've assigned our young apprentice witch to a mentor named Gertie, who isn't quite up to snuff. Can she fulfill the contract and get FBF done before the deadline? What's in it for the Union anyway? To make matters worse, Leigh's friends and family are still reeling from their last disastrous episode in Accidental Leigh. Will she make her Sister Sarah's lackluster love life even worse, by attempting to fulfill her erotic fantasy from her favorite BDSM/Navy SEAL/Amnesia novel? And yes, it is titled "Bound to Forget". Love is in the air, but so is catastrophe, now that Leigh is also getting some very strong feelings for Hunter, the hunky roofer turned Chicago Police Academy cadet. Find out almost everything, and even learn about a Paranormal Pet Shop, what really sank the Titanic, magic brownies, how the Great Chicago Fire really started, and more in Serious Leigh, Book 2 of the Literal Leigh Romance Diaries by Melanie James.

so damned funny! we all have bosses who want us to complete work on time, but these Witches take it another step. between the comedy and drama of Leigh's predicament, you'll find a heartwarming story!

I did again enjoy this 2nd instalment although the first one is my favourite so far. All the characters are likeable even those who at first seem to resist eventually grow on you. Again there were parts that had me laughing out loud literally and not just a quick ha ha, but a long, LMAO. I am intreagued to find out what will happen next but will wait a bit as I find them expensive for the length. They are very short and should perhaps be bit more economical. Again Hollie Jackson is amazing. Are you sure she's not secretly the author? I ask this because she does the personas so well. I don't think anyone else could do it any better. Good job on both counts, story and narration!

If you could sum up Serious Leigh in three words, what would they be?

Marie Laveau and Gertie's voices we awesome!! And Hollie really brought them to life.

I loved the whole story!! But maybe the visit to Gertie's paranormal pet shop.

Gertie is turning out to be a wonderful character in the series I cant wait to see what she does next!

Where does Serious Leigh rank among all the audiobooks you’ve listened to so far?

Need a laugh, a pick me up? Every time I need a pick me up, I plug in one of Melanie James' Leigh books. They are all awesome and with the narration, it just makes it even better. Be sure to get this.

This is one of the funnies series I've ever read and listening to it only makes it funnier. I laughed out loud so hard. This is one series you will want to read/listen too as soon as you get a chance. I highly recommend this!

down right out hysterical!

What made the experience of listening to Serious Leigh the most enjoyable?

The story is just plain addictive!

Okay so in this one, Gertie! She is just hysterical! you can't help but love her!

Yes! there is no way you can just shut it off.

After listening to the first two books in this series, I am biting at the bit to listen to the rest!

Would you consider the audio edition of Serious Leigh to be better than the print version?

yes only because it's more convenient

The wit and humor that the writer Melanie James placed in the story.

Gerdy (not sure of spelling)

It made me laugh so hard that I fell out of my chair!

A wonderful read that I will recommend to many readers.

If you could sum up Serious Leigh in three words, what would they be?

I loved everything, there was nothing I liked best

love all of them

Where does Serious Leigh rank among all the audiobooks you’ve listened to so far?

I rank this book in my top five.

I love this whole series. Each book is funnier and funnier.

My favorite is Leigh. Hollie Jackson has the perfect voice to bring her to life.

I loved the whole book. I didn't have a favorite moment because there are too many to pick from.

I absolutely adore Melanie James' Literal Leigh Romance Diaries series. If you want a funny, sexy read, then this book is for you.

I LOVE this series in audio!

Would you consider the audio edition of Serious Leigh to be better than the print version?

I haven't read the print version yet, but I would have a hard time reading it now without imagining Holly's narration :)

What other book might you compare Serious Leigh to and why?

I don't really know what to compare it to.. it's a really unique series!

When Gertie walked in on a naked Hunter. lol

Yes, I hated that I couldn't just keep listening. It's nice to listen to while driving!

Holly Jackson does a fantastic job, I love how great her Irish accent sounds when she voices Gertie. It's really just perfect.