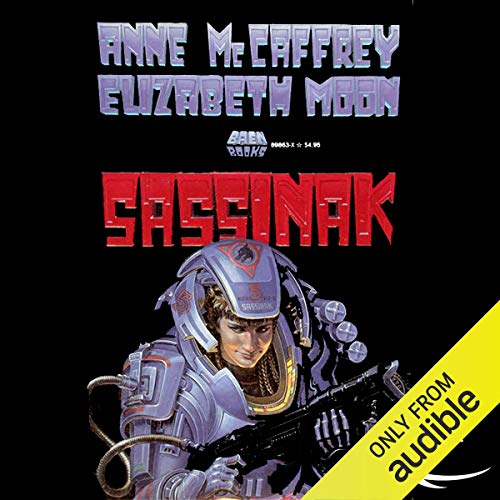 Old enough to be used

Young enough to be broken

Sassinak was 12 when the raiders came. That made her just the right age: old enough to be used, young enough to be broken. Or so the slavers thought. But Sassy turned out to be a little different from your typical slave girl. Maybe it was her unusual physical strength. Maybe it was her friendship with the captured Fleet crewman. Maybe it was her spirit. Whatever it was, it wouldn't let her resign herself to the life of a slave. She bided her time, watched for her moment. Finally it came, and she escaped.

But that was only the beginning for Sassinak. Now she's a Fleet Captain with a pirate-chasing ship of her own, and only one regret in her life: not enough pirates.

What would have made Sassinak better?

A different narrator who can pronounce words correctly. I spent 2/3's of my time trying to figure out what he was saying, and I've read the book in print!

The story is great. I have read it in print several times.

Who would you have cast as narrator instead of Ax Norman?

What character would you cut from Sassinak?

I don't think I'd cut any of them. They all play a purpose.

Gah. The narrator totally ruined this one for me.

What disappointed you about Sassinak?

Would you recommend Sassinak to your friends? Why or why not?

If he read in complete sentences it would help. Pauses after a couple words each time instead of with the sentences.

The narrator - or at least his pronunciation of names -- VERY grating when the title character's name is pronounced wrong: SUH - sin - ick instead of SASS - i - nack even though pronounced shortened name correctly "Sass"!

Do you think Sassinak needs a follow-up book? Why or why not?

Seriously! You have got to be kidding!

I couldn't get through the first 10 minutes of the book. Gosh awful. The narrator could not even pronounce the heroine's name right much less numerous every day words in what would be less than a page of printed book. If the book is about a heroine why have a male narrator with no voice inflections?

I hoped for better; I didn't get it.

Once again I am disappointed by the newly published audiobook of an old favorite sf/f book. Maybe Audible Frontiers needs a bit more in their budget for narrators.

Ax Norman did a passable job of reading the book. He did not feature any differing voices for the different characters. Toward the end of the book he began to waver in how he pronounced names - maybe he was getting tired. And Mr Norman's rhythm varied a lot, sometimes fast when it should have been slow and vice-versa.

It was perhaps only my many re-readings of this book that made me hope for better, and that I differed with how Mr Norman chose to pronounce names. The title character in particular, I've always thought of as SASS-ih-nak, not Sah-SIN-ik. Sadly, we can't ask Ms McCaffrey.

I won't be buying any sequels as audiobooks, and definitely not any of Mr Norman's other recordings. In 2013, I've come to expect multiple voices, consistent pronunciations, and timing that suits the story.

Would you listen to Sassinak again? Why?

I like the writing styles of both Anne McCaffrey and Elizabeth Moon. I knew of McCaffrey first from her Pern books. Sassinak was one of my introductions to Elizabeth Moon who quickly became one of my favourites. The Audible version of Sassinak is actually my third copy of the book with the other two much loved in years of re-reading long ago. I bought the Audible to "re-read" and enjoy again.

The narrator has a nice vocal tone but doesn't do any voicing for the various characters. The reading tone of all character's speaking is the same as the narration. This can make it difficult to follow a conversation between characters if there is no 'he said', 'she said' narration. I would not choose another book based solely on him being the reader. I likely would not get a new-to-me book if he's the narrator since the lack of characterization could be confusing if I didn't already know some of the overall story.

There are moments of humor in the story, but it's not a comedy. There are some emotional parts to the story, especially in the early part of the book in Sassinak's youth.

This is not book 1

This is actually Book 2. The correct order of this series is
Death of Sleep #1
Sassinak #2
Generation Warrior #3

What made the experience of listening to Sassinak the most enjoyable?

I loved reading the book years ago and REALLY enjoyed following back along the heroine's life adventures. I found it easy to feel myself an unseen observer watching her life unfold. It was a bit jarring to come back to myself in my mundane world when it was over.

What other book might you compare Sassinak to and why?

I can't think of any other book like it offhand, but The Ship Who Sang or The Ship Who Searched might come close as they both start in childhood and progress in divisions into adulthood adventures and both also involve spaceships and pirates as well as other adventures and romance.

Who would you have cast as narrator instead of Ax Norman?

I would have much preferred Susan Erickson or Sandra Burr as narrator. Not just because the lead character is female, but because both ladies have excellent pronunciation and a wonderful ability to change their vocal presentation for different characters. They are also great with accents and the leading character is descended from a Gaelic ("neo-Gaesh") background so a slightly Irish or Scottish accent would have been a great way to individualize the lead character. The book even describes the neo-Gaesh people as having an accent. This could easily have been used as a way to distinguish her early life from her later life when she was speaking "Standard".

I remember choking up with tears rolling when Sassy's family was killed and later when her guardian was also killed. I got anxious when she was attacked and also got excited when she got to meet her ancestress and had this big smile on my face when they were together, even chuckling a bit at their jokes and recognized similarities.

The book was well edited with none of the grammatical errors or inconsistencies so common in books today. There was never any doubt which character was being talked about at any given time.

Avoid this version at all costs!

I approached this audiobook with anticipation as it was a frequent re-read when I could still see. In reference to the above stars, the Performance only received one star because I could not give it a zero. I hold both the producer and the reader to blame. The poor Sassinak (Sas-IN-ik) could not pronounce Sassinak (SAS-in-AK). This completely disrupts my ability to enjoy the story. To be fair, I jumped the early part of the book to where Sass went to school as a freed slave, seeking my favorite part of the book. I could not stomach it for any length of time.

I find the treatment of this entire series in audio format to be distressing. Dinosaur Planet and Dinosaur Planet Survivors do not seem to be available. Sassinak is poorly produced and Generation Warriors, which concludes the series, is a disasterous abridged version which leaves out almost 3/4 of the story. I truely lament this situation, as Dinosaur Planet was the first Anne McCaffery book I read back in my teen years.

Read this a long time ago, enjoyed it then and enjoyed listening to it. Good story telling.