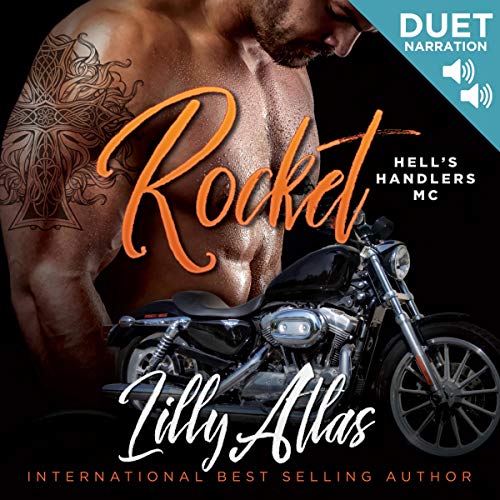 Logan "Rocket" Carrera has a history he prefers to leave buried under prickly layers of standoffish personality. He's seen and done things that would make most people lie awake at night. A master of compartmentalization, he's never had trouble moving on until the night he rescues the redheaded Chloe from a sadistic gang.

Kidnapped, beaten, and abused by criminals, Chloe has a difficult time assimilating back into the world after the most traumatic experience of her life. With each passing day, her anxiety builds until she's forced to find an outlet. Finally, Chloe discovers her own way to make sense of the world and steal a few moments of peace. There's just one problem: She can't tell a soul what she's doing. Who could ever understand the risk she's taking?

Unable to stay away from the fascinating woman who's screwing with his head just by breathing, Rocket tails Chloe as often as he can. His curiosity over her actions borders on obsession. Before long, and despite the MC president's orders to keep his distance, Rocket succumbs to the urge to approach her.

Logan, the handsome man Chloe meets in a bar, gives her exactly what she needs. He's accepting of her unusual requests in a way she hadn't thought possible. The fantasy unravels, however, when she discovers who he really is, the outlaw biker who saw her at her very lowest moment. Will Chloe be able to accept Logan as the biker, Rocket, and allow him into her life enough to help her heal? The answer won't matter if his violent past sucks him away before she has a chance to try.

Love EVERYTHING ABOUT THIS SERIES!!
Hot, suspenseful, kept me on the edge of my seat!!

I want ALL the Hell's Handlers books to be narrated, each and everyone of these books are awesome. Rocket and Chloe's story is fun and I loved seeing Chloe become badass like Izzy. HH's old ladies are outstanding.

I have read the whole series and OMG I don’t know if it’s the writing that brings out the best of Erin and Noah or just all 3 are amazing. The stories are well written just enough drama, the woman aren’t constantly annoying. The men are the right amount of sweet with the perfect amount of dirty mouth. The way they do the intimacy is so freaking hot. I hope these narrators work together more the duel narrative is so much better.

having a hard time with this review. books 1 & 2 were good and made me care about the brothers and their women. books 3 & 4 were better, made me love the MC, straight up.
all those 4 were AE. I had decided I had to buy at least books 3 & 4 but probably them all.
this book was not AE. I loved the last couple so much I couldn't skip it. what a rip off.
I won't return it because of how much I enjoyed the others and may still buy them....MAY..... after I'm done being mad.
a couple stray smiles here and there I guess.
mostly a sex fest. chapter after chapter of "aaaahhhh." ......SKIP
mostly, why is the male the only one who is supposed to be loyal and supportive? he went off for weeks to fight for .... essentially, her. when he got back she bailed on him and instantly attacked him. she showed zero faith or trust in him and HE was the one apologizing? fixing things? just no.
yep, I got it, the theme of the book is that he is a protector. I guess I didn't know that was a synonym for door mat. she did this and that decent thing for him through the story but her instant blow up in his face at the word of his greatest enemy.... not ok. wish I would have stopped at book 4. peace

I love the No Prisoners MC Series and the Hell's Handlers MC Series...I hope and pray the rest of the books in these series are put on Audible very soon, going crazy waiting for them :(

MC Romance at its best

I’m crazy in love with this crew and I wasn’t disappointed this time. Like all his MC brothers, Logan/Rocket is tough as nails. Remember, this is a one-percenter MC, so they aren’t saints. However, although their actions aren’t always good in the eyes of society, they have a moral code and I like that.
The other part like about these books are the heroines, no matter what happens and how many times they got in trouble, they always fight back and they always support their men.
Finally, the stories are always entertaining and - although themes are reoccurring - diverse.

Since this is an audiobook review, a few words about the duet. Both narrators are great on their own but I find them even better combined. I love how they can make each character stand out and have their own voice and personality. I would never mistake Izzy for Cloe or Copper for Rocket and that not only because of Lilly Atlas’ great writing but also the skills narrators.

This is the best book of the series.
I hope there will be more books added in the future

it kills me that audible is 3 books behind. This is my favorite mc romance book and the narrative is perfection!! Can't wait for the next books!