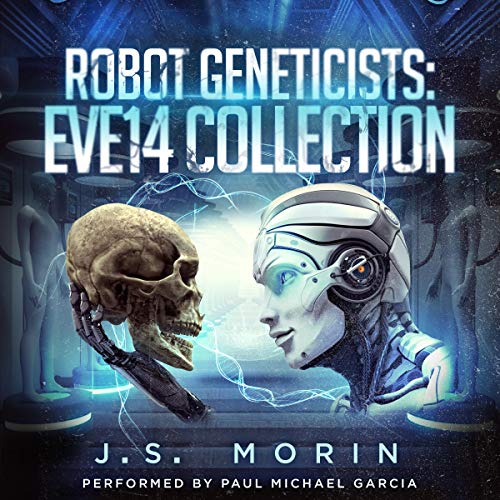 She is the result of a 1000-year project by the robots of Earth to restore the planet after all life was wiped out in 2065.

27 robotic minds, copied from Earth's great scientists, carried on after the species died. They mixed and matched those minds in endless combinations, producing a whole race of machines with human personalities. Immortal, but with memories of sensations they can no longer experience, some renegade robots now have a daring agenda.

As the only viable human host on Earth, Eve14 is on everyone's most wanted list.

Robot Geneticists is a series set on Earth in a distant future. Fans of Asimov and the sci-fi titans of the Golden Age of sci-fi will love the classic elements reimagined in modern style.

Robots are robots. Scientists think on a grandiose scale. Anything is possible with science, willpower, and hard work.

Grab your copy for a true post-apocalyptic tale.

In the middle of the 21st century, an alien invasion wiped out humanity in under six months. Unable to stop the invaders, 27 scientists resolved to upload their minds into a mainframe to be placed in the bodies of robots.

Fast forward a millennium. Throughout the following centuries, robots have been created and have thrived. There are now over 2,000 of them, each with a unique blend of minds from the base 27, categorized/named based on their primary personality (ie a John might be 85% John's original personality, 10% Charlie's, and 5% Toby's). Each acts as an individual, has a different role from their "siblings," and follows a set of rules (not laws) that govern what has primarily been a peaceful existence.

The utopia of this new world harbors a deep secret; each robot wishes to be human. Tormented by the memories of the base human minds, each robot yearns for the sensations that only being flesh and blood can provide. Colors, tastes, smells etc. lack the zest they once had now that they are simply rendered as ones and zeroes. And that is where the geneticists come in. Despite it being outlawed, one robot believes she has solved the complications of creating a human body. Through trial and error, Eve14 represents the hope that robots have been waiting for, as the chance to reclaim their humanity is nigh. However, in order for the bodies to be viable they must have a functioning mind, one that has spent years learning and developing, one that is not so keen to be deleted and replaced by a robot's mind.

Admittedly, I have only listened to the first book at the point of writing this review. It is enough, however, to have an informed opinion of the writing and narrating. J.S. Morin has crafted a world that just makes sense. The things the robots have done to preserve humanity's history and culture are both logical and emotionally relevant. Great works of architecture that have been damaged since the alien war, or simply due to the passage of time, are restored. The world has been cultivated to prepare for mankind's eventual return. The relatively loose guidelines society lives by works (mostly), without being unbelievably followed strictly by all. This series has serious potential. If it lives up to that potential then an edit to the star rating will be in order.

Paul Michael Garcia provides terrific narration. His storytelling is excellent, his intonation spot on, and his sense of pace impeccable. He delivers the dialogue smoothly, incorporating the emotions superbly for every line. His performance is absolutely wonderful.

I wasn't sure this was my kind of sci-fi. I'm very glad to be wrong! This is 6 books, each with its own unique twists & plots. Morin is an interesting story teller who provided the variety needed to keep me listening without becoming bored. The characters, including the 'bad guys', are relatable even when they are being predictable. I've listened to lots of books that were enjoyable but once through was plenty. This is one was a fun listen that I'll listen to again!

Didn’t think I would like this one but since Morin was the author I figured it was worth a try, and I was right. Morin is simply an excellent author. Also Garcia is an excellent narrator.

"¿Could this be a possible future for Mankind?"

Enjoyed this book, well written and equally well read by the narrator. Made me think a time or two about how humans would react given we survive to a future point where we have the capability to digitally imprint the mind. With the posability of all aspects of human nature that could unfold in such a scenario, the author keeps the story line at a fairly tame level. No blood , gore or major human casualties. Robots for the major part had a prime objective ( preserve human life at all cost) However a sect did start a faction of robots that wanted to upload into humanbodies cloned with crystaline brains to become human. And humans uploading into robots comes into play in the last book. Altogether good read. Thank you to the Author for the time spent over the making of this story, In Appreciation, Windshadow

ALL SORTS OF ROBOTS!

ALL SORTS OF HUMANS!

What does it mean to be human? I enjoyed this story's answer. This is very good sci-fi. I hadn't come across really good sci-fi in a while.

Humans are extinct, human minds are uploaded to robot bodies, then some unfortunate genetics, then some humans, then some robots uploaded to human bodies, then cyborgs, then ..oh, just get the series. .Solid world-building, fleshed out characters, interesting dialogue, some science,a shocker revelation or two, great narration..as good as it gets.

I paid for my book and I'm off to pay for more of his books.

I can see some people may like this book, but I just couldn’t get into it. I feel the author put a lot of time and thought into this story, Unfortunately, It felt like the robots were too snooty for me, and it made me not like them. I listened to a few chapters, and ended up moving on. I downloaded another Twinborn story because I really enjoyed those stories and characters.

The series starts out slow, but continues to get better with each book. I really enjoyed the whole series.

Everyone loves a Toby.

I really wasn't sure what to expect from this. I have to say I was really impressed with his vision of a robotic world which interestingly isn't much different from our own because of how they gain sentience through use of human consciousness so the story really works for me. I love all the thought processes from robot standpoint even though in real life some of these things would happen in microseconds for robots he really helps mesh it all together with their human-based thinking and how they strive to be human again. I will come back and change this review if I keep going and it gets bad but I am SO excited there are so many more hours to listen to. A+++++

Third time I have listened to this series in its entirety. I just cannot say enough good things about the character building, logic and story line. I love this scifi series, easily my favorite on audible. There's just something about the ambiance, it's like an album you don't want to skip any songs on. Definitely will be coming back for another replay in a few months.

This was hard to get through

I am having hard time finishing this book. I The antagonists are repetitive and very unlikable. I found myself forwarding through their chapters. I still enjoy the authors books but probably wouldn't read a new series of this.

This is all 6 books of the Robotic Geneticist series. The books are as below.
Book 1
This book introduces Eve, Plato and Charlie 7. Eve is the result of illegal genetic experiments as is Plato. Plato had managed to escape and made it his goal to punish all illegal geneticist. It becomes apparent and Charlie 7 becomes involved. This is the beginning of an attempt to give the experiments a voice in their own destiny.
Book 2
This is the second book of the Robot Geneticists series. It continues with Eve representing the 8 known clones and finding the robots do not want to give the humans the freedom they wish because the robots feel they must be protected and prevented from doing illogical things.

The entire book is about Eve trying to save Plato and have a new chassis loaded with Charlie 7's memory. It also involves other robots who have their own agenda and working at cross efforts to prevent this from happening.
Book 3
This was book three of the series. It was filled with surprises as Eve, Plato, and Charlie 7 continued to track down the upload cabal and to improve the lives of the new humans.

There were many mistakes and some real surprises. There was a ramping up of tension between the humans and the robots as the team tried to investigate the unlawful activities and the robots wanted complete privacy.

There also was a great deal of resentment from the robots when humans were in fact present even though they had been planning for them for 1000 years.

Book 4
After Rachel 18 stumbles across old files that the robots were programmed to not see it springs a revolution that had been brewing and planned for a long time. Robots who were not satisfied with their life and wanted to become human wanted to seize control so they could clone humans and overlay their brain with themselves. This involved putting all the humans in danger as well as exposing secrets that Charlie 7 had kept hidden for a thousand years.

This book was end to end excitement. It was well written and the story held together and kept my interest throughout. The narrator was outstanding and the use of multiple voices for the characters was excellent.
Book 5
The first 10 chapters are composed of describing how the children come to be and how they develop. But then the rest of the story involves the attempt of the humans to define their own destiny in relationship to the robots. The two main characters are Abby and Alex. Abby is frustrated because she has not been able to accomplish what she felt she should. Alex is frustrated because he feels that the robots are preventing him from developing dark energy.

Alex sets out with a plan to gain control of the system to change it and allow human development as he wishes while Abby opposes him in an effort to keep the status quo. The interpersonal play is sometimes frustrating but you are always on the edge of your seat wondering what will happen next.
Book 6
The story of this book revolves around Mars. Mankind has expanded to Mars and the people who are there have developed an independence from the robots and want a more human centrist society. Upon moving to Mars one of Eve's great granddaughters runs afoul of this group and is taken captive as hostage. Since Eve's health has deteriorated it falls on Abby to try and negotiate with them.

This book is full of surprises and many twists and turns. It is a very well written book and does a good job of concluding the series.

The narration is outstanding as it has been throughout the series.

This book was provided free of charge with the expectation of an honest review.