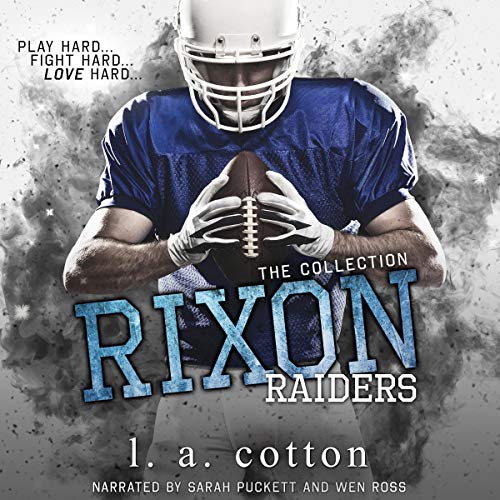 The best-selling Rixon Raiders series has been bundled together to bring you a lot of angsty and addictive sports romance.Follow three couples as they navigate the ups and downs of friendship, love, and football.

The Trouble with You - an enemies-to-lovers story.

Hailee Raine only has to survive one more year.

One year of life in her football obsessed town. One year of nauseating school spirit. Just one more year of her cruel step-brother Jason; and his cocky, arrogant, football-playing friends. She hates them. Especially, Cameron Chase, the guy she thought was different.

Cameron Chase has the world at his feet.

He has it all; good looks, talent, and the charm to go with it. He has colleges lined up at the door, all wanting a piece of Rixon Raiders star wide receiver. Until something threatens everything he's ever worked for, and only one person can quiet the war raging inside him. But he's supposed to hate her; his best friend's sister.

Then Hailee finds herself in the middle of a football prank gone wrong...

And suddenly hating each other never felt so good.

The Game You Play - a hate-to-love story

Lose her virginity. Meet her knight-in-shining-armor and fall in love. Have the best senior year a girl can have. The only problem? Her knight isn’t a saint, he’s a villain, and she’s pretty sure he’ll destroy her before ever handing over a piece of his heart.

Jason Ford has a plan.

Win State and go down as one of the most successful Quarterbacks in Rixon Raider history. Head off to college and pursue his dream of being drafted to the NFL. Avoid the girl under his skin. Felicity Giles, his stepsister’s best friend and perpetual pain in his ass.

She’s annoying as hell. Quirky. She’s a game to him, nothing more.

Until his arch rival comes after him and the few people he cares about...and Felicity gets caught in the crossfire.

And suddenly hating her feels a whole lot like falling in love.

The Harder You Fall - a friends-to-lovers story.

The kind that run deep and leave marks. Rixon is only supposed to be a temporary place to hide, but it's quickly becoming something more. She's almost certain it has nothing to do with the blond-haired, blue-eyed football player who makes her laugh. Who makes her believe in fairy tales again. Even if she knows her life is destined to be nothing more than a tragedy.

Not the scandalous kind, but the ones that fester, slowly eating away at your soul.

On the face of it, he's Mr Popular, always down for a party and causing a little mayhem.

I really enjoyed this series. There was the perfect amount of angst and steam. All 3 books were worthy of 5 star ratings. My only slight complaint is the narration. I wished there was more emphasis on making Hailey and Felicity voices different and Maya a more Latina accent. This series was well worth the credit.

I absolutely love the boys of Rixon High and their girls. Love how fierce and loyal they are and protects what is theirs.

Couldn’t put it down!

The love to hate relationship in the first book stole my heart and Asher’s humor steals the show!
Another great series that I couldn’t put down by LA Cotton!

These were great stories to listen to! This series is amazing and I was hooked from the very beginning. I look forward to the next book in the series and I would highly recommend it!

absolutely loved it! would totally recommend to anyone wanting to read any college romance. have read all of LA Cotton’s books and she never fails to make me cry and fall in love with her books! ❤️

This is the Full Rixon Raiders set which includes: The Trouble with you, The Game you play and The Harder you fall.

The trouble with you is about Cameron and and Hailee

The game you play is about Jason and Felicity

The harder you fall is about Asher and Mya

All three of these books are amazing and LA Cotton is definitely one of the Queens of sports romance!

This is one of my absolute favorite series from this author and I literally couldn’t get enough of these Raiders!

Gripping from beginning to end, you definitely don’t want to miss out on this series!

5 stars and i highly recommend this