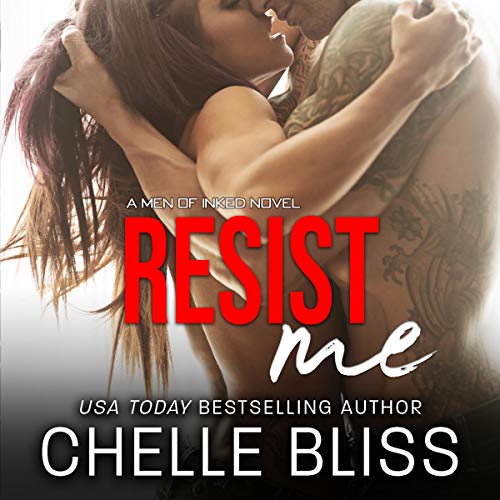 Izzy Gallo has never been described as a member of the weaker sex. She's a woman who doesn't take shit from anyone. Growing up with four older, overprotective brothers has hardened her, making her a force to be reckoned with. Against the wishes of her two brothers, Joe and Mike, Izzy takes a weekend trip to Bike Week in Daytona and turns her world upside down. Over her head, in a world she doesn't understand, there's only one man who can save her.

James Caldo has dedicated his life to protect and serve as a member of the DEA. He's cocky, overbearing, and doesn't take no for an answer; the Gallo men have nothing on him. When their paths cross, James makes Izzy question everything she believes about completely surrendering to the opposite sex. Does James have what it takes to overpower the headstrong Izzy, capturing her heart forever?

Book 3 of the Me of Ink becomes very tense. We find Izzy and James head over heels tor each other and trying to take it slow. But their passion runs hot. Lance Greenfield and Simone Lewis do a very good job of narrating this story.⚘⚘⚘

I loved this story. Can’t wait for the next one. Narrators were also excellent. Chelle Bliss hits another home run!!!!

Each book in this series is better than the one before. They are standalone books, but this one does end in a bit of a cliffhanger. Fortunately the next two are available!

This story wasn’t as intense or emotionally evoking as a couple of the other books, in the series. It was amusing to witness Izzy meet her match. That being said, I’m pissed there tale wasn’t completed and that the serious conflict in the MC also isn’t resolved. I hate cliffhangers.
-V from Kansas

Not into the whole male dominance thing!

Didn't care for it. They liked to act like there is a story but it is all about either talking about sex, thinking about sex, or wanting sex, all throughout. I like the girl to be a little hard to get before they hookup the first time but Izzy never played hard to get even though she tried to act like she was with her smart mouth. It is like the only reason she couldn't resist him is all due to the sex - not any emotional attachment. And I am not into the whole male dominance thing with the guy ordering the girl throughout the entire thing - or the part I listened to - I couldn't finish it. Plus he kind of pushed her into the anal sex they had. I thought he should have let her build up to it for a few days. Nope wasn't my thing. Sex was the main connection. Yeah not going to try any of the others in the series.

this is about Izzy and James. it is a good story. i really enjoyed reading mire about Izzy. i am glad she found someone to put up with her.

Again with the narrators

They -specifically the female- almost ruined it for me.
Too slow, too methodical, too monotone.

I have really enjoyed this series. every time I look forward to the next one.

Great addition to the series

I love Izzy and her personality. Seeing someone who can go toe to toe with her was so fun. I loved James too.
The narration was pretty good. Sometimes the guy got really breathy and it wasnt my cup of tea but overall it was a great listen.

The sex is hot and suspense even hotter