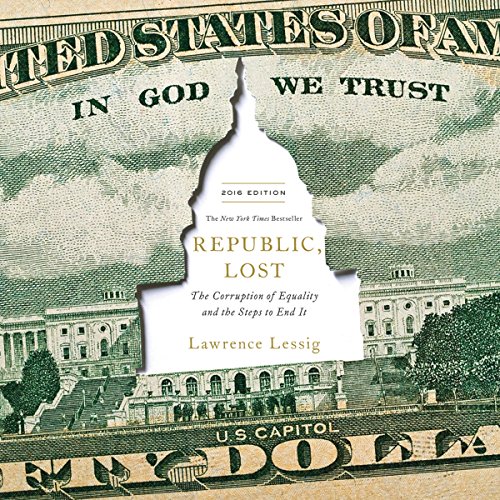 New material for the 2016 election!

In an era when special interests funnel huge amounts of money into our government - driven by shifts in campaign-finance rules and brought to new levels by the Supreme Court in Citizens United v. Federal Election Commission - trust in our government has reached an all-time low. More than ever before, Americans believe that money buys results in Congress and that business interests wield control over our legislature.

With heartfelt urgency and a keen desire for righting wrongs, Harvard law professor Lawrence Lessig takes a clear-eyed look at how we arrived at this crisis: how fundamentally good people, with good intentions, have allowed our democracy to be co-opted by outside interests and how this exploitation has become entrenched in the system. Rejecting simple labels and reductive logic - and instead using examples that resonate as powerfully on the Right as on the Left - Lessig seeks out the root causes of our situation. He plumbs the issues of campaign financing and corporate lobbying, revealing the human faces and follies that have allowed corruption to take such a foothold in our system. He puts the issues in terms that nonwonks can understand, using real-world analogies and real human stories. And ultimately he calls for widespread mobilization and a new Constitutional Convention, presenting achievable solutions for regaining control of our corrupted - but redeemable - representational system. In this way Lessig plots a road map for returning our republic to its intended greatness.

While America may be divided, Lessig vividly champions the idea that we can succeed if we accept that corruption is our common enemy and that we must find a way to fight against it. In Republic, Lost, he not only makes this need palpable and clear - he gives us the practical and intellectual tools to do something about it.

get the money it of campaigning, or at least make it very different. Brief, but good book

History of our government and corruption of it

It took a while to get through, but it was a good book. The ideas put forth are interesting. This book definitely explains why things are so corrupt in U.S.A. The corrupt bribery campaign finance system. how would you even start to fix it? Revoloution somehow? I say that because all of the politicians getting kickbacks would try to stop this correction.