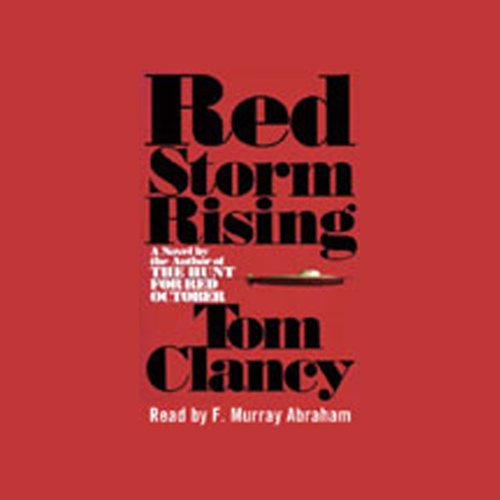 "Allah!" With that shrill cry, three Muslim terrorists blow up a key Soviet oil complex, creating a critical oil shortage that threatens the stability of the USSR.

To offset the effects of this disaster, members of the Politburo and the KGB devise a brilliant plan of diplomatic trickery - a sequence of events designed to pit the NATO allies against each other - a distraction calculated to enable the Soviets to seize all the oil in the Persian Gulf.

But as this spellbinding story of international intrigue and global politics nears its climax, the Soviets are faced with another prospect, one they hadn't planned on: a full-scale conflict in which nobody can win.

“A rattling good yarn...lots of action.” (The New York Times)

I am unabashedly biased toward unabridged books but I can usually deal with most abridgements; not this one. Anyone who has read Tom Clancy is familiar with his extraordinary level of detail and setup work that goes into each of his novels. That verbose, often dry setup is what makes the action sequences, the punchlines if you will, so powerful. This abridgement of <U>Red Storm Rising</U> is so severely cut down, all you get is scattered action sequences that do not fit together very coherently. Add to that the fact that this classic Clancy pre-dates the character of Jack Ryan and you have nothing to hold this abridgement together at all.

In an attempt to save the story, this audio book is augmented with full sound effects and music, which does add back some of the imagery but none of the meaning. F. Murray Abraham does a terrific job narrating this story but because the editor stole most of his script, even he can't save this one.

If you know the story from the print version, this audio book is worth having as a refresher but if you are looking for your first Tom Clancy on audio from audible, I suggest you go with <U>Debt of Honor</U> and <U>Executive Orders</U>, the best two Clancy audio books available from audible. If you chose to get <U>Red Storm Rising</U>, be sure you get the least compressed version your player can handle, format 3 or 4, so that you can get the best reproduction of the sound effects and music.

Almost all Tom Clancy audio books are abridged and not one of them is improved by it shortening. <U>Red Storm Rising</U> is all but killed by it.

The abridged version is far too short. RSR is a great book, but this recording is a big disppointment. It's leaps from one scene to another without context.

What a disapointment. The book has been shreaded. Wait for the unabridged version and what is with all the sound effects in this revision. They are far to distracting, and often over power the readers voice. Don't bother with this version of the audio book.

The original (unedited) book is an amazingly good read. I’d give the unabridged version six stars, if I could. At less than 3 hours in length, this isn’t even a good synopsis of a brief overview of a short summary. Really, its not much more than “The Soviets needed oil. They started a war. They lost.”

The unabridged version is over 31 hours. You just can’t cut >90% out of a book, and expect it to retain any of the quality of the original.

Agree with all the others.

I should have read the other reviews before ordering. I will not be making that mistake again.

This abridged version of a classic is so bad it seems like it is a battle between the Soviet army and the U.S. Navy.

Gee, and to think I thought the movie version of Clear and Present Danger was the worst hack job ever.

Good Lord, this picture is worth 1 word.

For some reason I thought this was the full version, started it up at work and got real confused 20 minutes in. I had read the original book long ago and barely recognized this tumbled up bunch of disjointed scenes as being from it.
. . .
Once I saw the total running time of 2 hours, I checked here after I got home and indeed it is an "abridged" version, if this abortive attempt at trimming it down could be rewarded with a score that should be as low as my respect for audible is right now. Going to get the unabridged version and hope this was just a rare mistake on audibles part.
. . .
Any way to delete this from my library? I don't even want to accidentally play this again.

OH AND WHAT'S UP WITH RUNNING ALL MY PARAGRAPHS TOGETHER IN ONE UGLY CLUMP!?

Poorest I have heard

Many abridged versions of popular books accurately represent the original text and author's intent. This is an example of one that does not! The performance is fine with easy to follow reading and sound effects, the problem lies in the editing of the text. Real meaning has been lost and a sense of each character's personality has been changed by the editor. This is not limited to just one character but is consistent throughout the book. This is one abridged book I wish I had not purchased.

Extremely short version of long book. the Narrator is good but the abridged version is just way too short.

I absolutely love this novel (having read it twice I am very familiar with it) - and it was done in a fun way - but it is "too abridged" - wish there was the full audiobook or an abridged version that did not remove entire sections of the story.

This audio book was awful. It had cheesy sound effects that detracted from the story. Instead of abridging this book and making it around 5 hours long like the other Clancy books, they butchered it and made it about 2 hours long. I was extremely disappointed in this book.