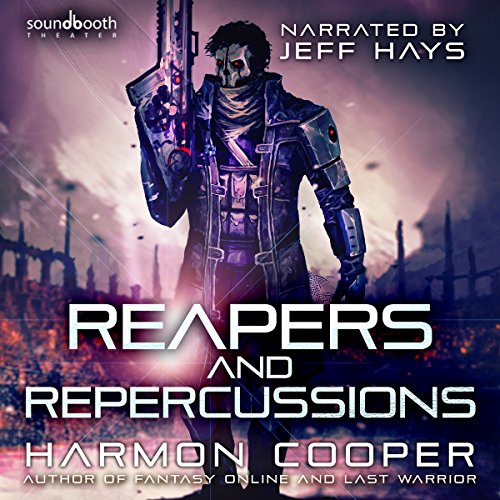 Things heat up in Tritania as Quantum Hughes and the Dream Team continue their search for Strata Godsick's son both in the real world and the Proxima Galaxy.

An attack in the real world throws a wrench into their plans, as does an event and a key decision that may change the team forever. Expect giants, expect dragons, expect Quantum being as maverick as ever, expect a few twists and surprises as the Dream Team's membership grows by one and Quantum is finally able to use his favorite Loop weapons in Tritania.

The Soundbooth Theater team for this production:

A Pulse pounding adventure in Proxima

Cooper returns to the Proxima Galaxy and everybody's favorite smart mouth, Quantum Hughes, returns in style. My biggest beef with this dish? Not enough Francis Euphoria, I love that dame. The search for Godsick's son is still ongoing, and the dream team is finally making some progress on finding his location, but they end up getting sidetracked into doing a mission for one of the upper crust royal personages that think their diznikes don't stink. It was a blast seeing Quantum get some payback on one of the reaper B-holes that has been a plug in his "but" for a few books. Best use of a sword stick I've ever heard!

Seriously, Hughes is twice as mouthy and grumpier than ever, and his team seems to be suffering from the we can't trust anybody virus, as one or two members do some shadey dealings or break a lot easier than they should have. Quantum might be out of the action for a little of this book, but his arena fights are the stuff of Legends! And if you want to talk about funny, all I can say is there are two bits in which Quantum is chided for being racist, the first is an "Engrish Prease" back and forth that mad me belly laugh, and the other was about Islamic proselytizing that literally made me almost fall out of my car as I was opening the door because I was laughing so hard. Cooper is clearly the snarkiest snark that ever snarked, and he uses that to his advantage. I would fear a conversation with him, just on the basis that somewhere in the back of his lizard brain lurked a fully formed Quantum Hughes who was ready to strike at the slightest hint of vulnerability.

Also, I love the cover, Qpappy187 looks suitably vicious, but I would have loved to see him in his life vest with Hacky in his hand. That would have fit so much better than the grim and dark angle, but hey, ya gotta go with what sells and this cover is an attention grabber.

Gotta talk about Hays, and his narration. No one else could play the fast talking wise-acre, Quantum Hughes, quite like Hays does. I think other narrators would get marble mouthed just trying to keep up. Plus, it is refreshing to see Jeff doing the whole book solo, I appreciate the other SBT cast members, but Jeff just rocks out stories all on his own, and Quantum is 100% Jeff all the way. He spits out quotes and phrases that would stunt a lesser narrator's growth, and does so with aplomb. Shockingly, I do have a few small issues I have to take with the Master of the Vocal Arts. First, in the aforementioned Islamic bit there is a bit of a pause that goes a little long when the giant is speaking to the Dream team. It goes on for what feels longer than a dramatic pause and seems more like a piece that got spliced back into the story. Like he had to redo it due to a flubbed line, and the timing was just a little off. Next, and this is strictly because I know some chefs, and would get a wet rag slapped in my mouth if I said it this way, but Jeff says the word "Saucier" in a distinctly American manner. Technically, his saying the word as saucey-er isn't incorrect, but it is french, and they way I have always heard it is as saucey-A, with the A being a long vowel sound. The same way that person who recommends wine is referred to as a sommelier. It too, ends with a long A sound. I am sure he did his due diligence and checked out how to pronounce it, but sometimes that old interweb lies or misdirects you. Just check out Top Chef sometime, they will give you the real skinny on how to pronounce those kitchen terms. I really don't want to pick at nits, and I am seriously not pointing the no-no finger at Jeff, but it needed pointing out.

What does all that mean? With the issues that I took umbrage with, i.e. less Francis than I'd have liked, a minute (as in small) pause, and one word being misprounced I'd have to give this a subtraction of .00001 % of a star. Rounding up, there is no negligable difference. This book takes the Proxima Galaxy and sucks it into a black hole of pure awesomeness. You can't go wrong with the combo of Cooper and Hays!

finished it all in one go. if you liked the other books this keeps the hype going and then some

fun addition to the series. this doesn't add a new world, but builds off of the previous book in the series.

An author who knows how to end a series!

Thank you Harmon Cooper. I laughed out loud the entire time. This series was a lot of fun.

Very good addition to the series!

I have to say that I really like Harmon Cooper's books, especially when narrated by Soundbooth Theater. Of this series, this is probably my favorite one so far. My only real complaint is that there wasn't enough of the other characters for me. Fancis was kind of in it for a tiny bit. There is still lots of Q though! Keep em coming Mr. Cooper!!!

my favourite in the series so far

This was the best in my opinion so far, at one point I had given up on Quantum but I came back out of curiosity and it was well worth it

The story continues where it left off and is full of action. The comedy is great among the character interactions. Some very unique characters for the game world, such as a fecal pixie were funny to listen to. Great pacing and the action is non-stop. Jeff Hays unique voices for the characters is another reason this is a must listen. #Funny #Smartass #Witty #MultipleVoices #UniqueVoices #VoiceActor #tagsgiving #sweepstakes

Quantum Hughes, the original digital gangster is back. Reapers and Repercussions is the 4th book in the awesome Feedback Loop series. As you may remember Quantum Hughes spent years being trapped in the digital world, but he's since been freed and now with the aid of his Dream Team is continuing his pursuit of his enemies both in the real world and the virtual one. Also in this book we see more of Quantum's humorous struggle to come to terms with the outside world. And in typical Harmon Cooper fashion, Reapers and Repercussion features a great story that is loaded with plenty of fast paced action and a buttload of humor as Quantum uses dozens upon dozens of unusual objects from his massive inventory list to decimate his enemies.

Reading these books is great, but listening to them performed by the insanely talented Jeff Hays takes the experience to a whole new level. As you may or may not know, Jeff gives each and every character their own unique voice and speech pattern. He literally brings the worlds of the books he narrates to life. I'd forgotten how much I love the Quantum Hughes character, and Jeff becomes Quantum. The audio for book 5 can't get recorded/released fast enough, and I am dying for book 8 to get released so we can see how this entire saga ends. (unless Harmon decides to keep the saga going...which would be perfectly fine with me!)

Totally amazing it is like Harmon took classes from the Flying Circus Academy. I love all the sublte ties he has in this book and It makes me think the Goblin you meet later in the series is Quantum.