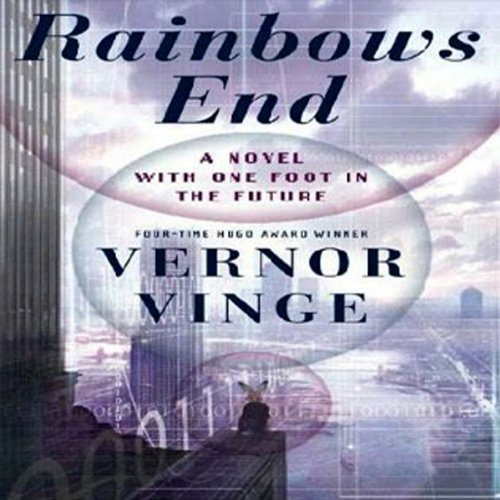 Vernor Vinge doesn't write novels very quickly, but when he writes one, it's well worth the wait. His last two novels have won the coveted Hugo Award for Best Science Fiction Novel of the year. Rainbows End is set in the same near future as his novella "Fast Times at Fairmont High", which won the Hugo Award in 2002 for Best Novella.

Set a few decades from now, Rainbows End is an epic adventure that encapsulates in a single extended family the challenges of the technological advances of the first quarter of the 21st century. The information revolution of the past 30 years blossoms into a web of conspiracies that could destroy Western civilization. At the center of the action is Robert Gu, a former Alzheimer's victim who has regained his mental and physical health through radical new therapies, and his family. His son and daughter-in-law are both in the military, but not a military we would recognize, while his middle-school-age granddaughter is involved in perhaps the most dangerous game of all, with people and forces more powerful than she or her parents can imagine.

Filled with excitement and Vinge's trademark potpourri of fascinating ideas, Rainbows End is another triumphantly entertaining novel by one of the true masters of the field.

"This top-drawer hard SF - fast-paced, packed with action, intellectually challenging and, above all, capable of invoking SF's grail: a genuine sense of wonder." ( Publishers Weekly)

One of my favorite things about Audible, are the surprises you find if willing to take a chance on mixed reviews.

This has been the best treat so far. My thanks to the readers who didn’t get it.

Having never even heard of Vinge, I was totally captivated by his near future extension of present day trends, and, the new tech he invents.

Story line and world view worked well together, no excessive fluff explaining concepts, but enough back story to keep everything together.

This is now one of my top 5 books, I just hope this glowing review doesn’t spoil it for a future treasure hunter.

A fantastic listen, full of great characters and ideas. If you like Neal Stephenson, William Gibson or Greg Bear (just to name a few) you will enjoy this book. Considered a post-cyberpunk masterpiece.

I was really excited at the beginning of this story. But by part 2 I was bored out of my brain. I know it's an award-winning novel, but for me there's far too much unnecessary dialogue and too few scene changes. It just doesn't move quickly enough for me. I gave up partway through part 2.

While those not used to traditional Science Fiction may find this read a little dense, it is SCIENCE Fiction. Based in a cyber mapped future, where practically everyone wears interfaces to the internet in their clothing, and information technology is used for good and evil, this story remains, at its heart, human. There is a reason this master crafted story won the Hugo- and that is because Vinge seems to not only understand the classic conflict of man vs machine, but he also realizes and typifies how much we love, hate and depend on being plugged in.

This is about a world, not too far into the future, where technology is everywhere, viruses and consumer manipulation is on the order of the day and one's life is intimately entwined with virtual realities.

The book's strength is that it builds on today's video and internet games and extends it into the future to create a real/virtual world that you could well imagine could actually come about.

But this is the book's ultimate weakness as well. It ends up reading too much like a video game. Nothing seems real and the story ends up sounding like a juvenile virtual dream.

While not the most compulsive of narratives, “Rainbows End” will nevertheless be of great interest to hardcore fans of speculative fiction. Treading similar ground to Neal Stephenson, Vernor Vinge’s story set in the very near future pulses with ideas and possibility, yet lacks the formers wit and verve.
The story revolves around the central character of Robert Gu, Nobel prize winning poet, lost in the depths of Alzheimer’s. Of the three main narrative threads this is the strongest, and could have functioned as a novel on its own. Gu’s story is one of redemption, beautifully expressed, and worth the listeners effort. Of the other two threads, namely an earth shaking conspiracy and persona called “Rabbit”, I was ambivalent and found them to be hard work. Having said that, the unexplained “Rabbit” remained with me for several days, and after some reflection I wonder if the author was expressing something regarding the evolution of technology; aka Pierre Teilhard de Chardin’s “Noosphere” .
The narration was of a high standard and I could not but help think that the character of Robert Gu sounded just like the voice of the actor Jason Robarts.

From the original Cyberspace Author

It's interesting to note how far thinking has come since Vernor Vinge's original "True Names" story about what we later came to call Cyberspace. In this novel, he gives us some glimpses into trends that are happening in social network software, computer hardware, bio-engineering and an entire raft of other things that are going on today. It's interesting to see how his thinking has changed from Cyberspace type visions to Augmented Reality and pervasive computing.

SF Down the Rabbit Hole

Really enjoyed this after I got past the uninspired narration... Top notch speculative sf w/ a bit of a Wonderland theme... Maybe a little slow to start but get moving, and the last third or so is fantastic, especially the last 2-3 hours... Good characters even if most aren’t terribly likeable, at least not to start... I loved the multiple literary sf references, most of all the less obvious throw away ones;). Little dense so wouldn’t recommend as a casual read... You’ll wanna cogitate and masticate over much presented if you’re into that sorta thing;) It is a better read than listen...

Even after reading through some of the the other luke warm reviews, I decided to go with this book. I generally like the techno-geeky genre other's don't relate to. But this story was busy, difficult to follow at times and the author seemed more interested in throwing in descriptions of his universe than developing the plot and characters.

For a book that relies heavily on a visually stunning setting the language in used is plain and unimaginative. The author tells you things are remarkable or beautiful he doesn't describe them. This makes it difficult to engage.

The characters are predictable and generally uninteresting with interpersonal drama that bodes and doesn't deliver.