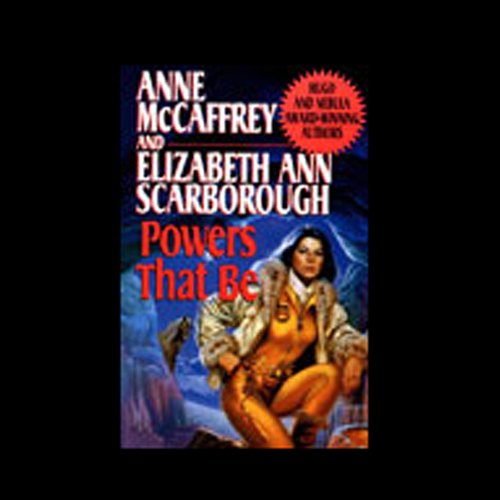 Strange things are happening on the icy planet of Petaybee. Unauthorized, genetically engineered species have been spotted, and the company has reason to believe that the locals are deliberately hiding something, and perhaps even plotting rebellion. As a combat veteran and a medical retiree due to spend the rest of her days on this arctic world, Yana is the ideal person to get close to the natives. She is quickly adopted by the people of Petaybee, who feed her a home remedy that soothes her ragged lungs. Her strength and health return, and she becomes determined to protect her new home and her people from the greedy and increasingly ruthless company. Powers That Be is read by Star Trek regular Marina Sirtis.

i will not buy abriged again

Would you try another book from Anne McCaffrey and Elizabeth Ann Scarborough and/or Marina Sirtis?

yes i love their books

What disappointed you about Powers That Be?

I loved this book and thought I'd try the audio version. The way that "The Ship Who Searched" was abridged was pretty good (or at least kept the story continuity) so I thought it was worth a shot to try this one. It was so badly abridged that even though it's been years since I read the full book I had no trouble missing what they took out. The story no longer makes anywhere near as much sense as the full book.

What was most disappointing about Anne McCaffrey and Elizabeth Ann Scarborough ’s story?

I have no problem with the story... in fact I love it... it is the way that it was abridged that I have a problem with.

Marina Sirtis did a pretty good job of narrating. She, in my opinion, mispronounced some of the words, but having seen her on Star Trek TNG I'd say it is just her accent.

I really wish they would do this book in an Unabridged format.

Would you try another book from Anne McCaffrey and Elizabeth Ann Scarborough and/or Marina Sirtis?

I certainly would try another book from the petaybee series

If you???ve listened to books by Anne McCaffrey and Elizabeth Ann Scarborough before, how does this one compare?

This one has always been a favorite. I love the recording, but it was overly abridged. A lot is left out and the story almost wouldn't make any sense if you had never read the unabridged version.

What does Marina Sirtis bring to the story that you wouldn???t experience if you just read the book?

Marina Sirtis was the perfect choice as a narrator for this story.

Great story, good narration. Anne McCaffrey never disappoints. There were a couple of glitches in the recording, I am assuming problems with the download.

Welcome to a new world

What would have made Powers That Be better?

It needed more of the original story

What was most disappointing about Anne McCaffrey and Elizabeth Ann Scarborough ’s story?

It was hard to follow the story line because it didn't flow right. In a couple of places, it got very staticky.

Would you be willing to try another one of Marina Sirtis’s performances?

If you could play editor, what scene or scenes would you have cut from Powers That Be?

I would have added to it, not cut anymore. As it was, it was cut to the bone, leaving out quite a bit which would have helped the story progress.

I enjoy the places that Anne McCaffrey takes me to and the characters she introduces me to. I love the science and imagination that combine in her tales. I read them over and over without being bored. The read is easy and can become addicting.

it had the feel of a story being told. I read the book several years back. but having a book read to you is delightful

It was an interesting book with a surprise ending.

What did you love best about Powers That Be?

The way that it could relate to our government too.

What other book might you compare Powers That Be to and why?

To others of Anne McCaffrey, as they are always off world with heroine and hard superiors.

The way the people stuck together during hardship and been put there, not of their own accord. Also the scene in the pool.

I liked the book, how she is sent to spy and winds up helping the people. The magical animals and how she becomes pregnant but wasn't aware of it. It's not too long and was easy to read.