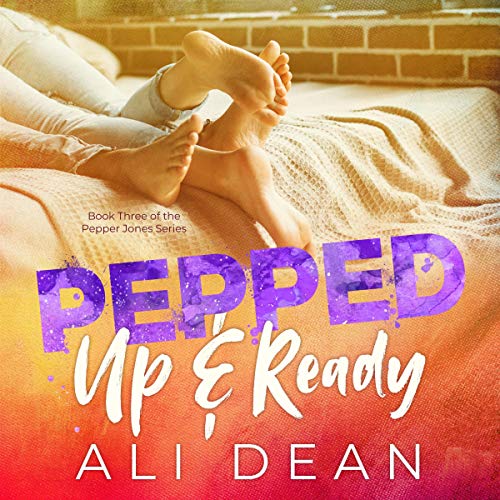 Pepped Up and Ready

Pepper is finally a senior, and she’s determined to defend her national cross-country title. Although Jace is busy with the demands of college football, he’s still at Pepper’s side, supporting her goals. But is she taking her renewed enthusiasm for training too far?

As Jace and Pepper focus on their athletic ambitions, they discover that Jace’s social status has followed him to college, despite his attempt to keep a low profile. With her boyfriend as an idol on campus, Pepper discovers that she might just be a target to those who find Jace threatening.

Are Jace and Pepper strong enough to withstand the pressure from those who want something from them? It won’t be easy fighting for her title and her boyfriend, but nothing easy is worth winning...or keeping.

This series gets better and better. I love that the author does not stick with one book per year, continually provides for the secondary characters throughout the books, and keeps you guessing with what is coming next. While the Pepper Jones series is a coming of age series, it is unlike any other that I have read. There is not a lot of repetition with the conflicts that occur and as the characters age in the series their character development matches their maturity.

Once again, Ms. Glemboski provides excellent narration for all of the characters both with the voices, feeling and ‘extras.’ I will certainly keep this series around for when my daughter is older and she is looking for books to read.

I was provided with a free copy of this audio book for my honest review. The views expressed here are entirely my own.

This may be my favorite in the series so far. Pepper is more passionate about her running. Jace is being supportive. It’s all just up in the air how much they will let outside influences determine their relationship.

This series is amazing!

I am seriously loving this series. All the drama and suspense in this book kept me on the edge of my seat. Ali Dean is a wonderful author and I love Stacey Glemboski narrating as well. Looking forward to the next book.

Pepper is wrapped up in more drama.

This far into the series and I'm still hooked! This one didn't rate as high as the others because so many times in the book I could feel myself wanting to scream at the decision Pepper was making. This book throws a curve ball and there's an unknown threat on Peppers heels off the track. This is a love roller-coaster and probably not the healthiest relationship but I'm hoping as we move through the series better decisions and communication will be made between the characters.

Narration was amazing! I felt every sense the characters were feeling. This feel good love story with a twist of drama made for a fast read that kept me wanting more.

Book 3 in the Pepped Up series that MUST BE read in order finds Pepper in her Senior year at high school and Jace a Freshman in college. They’re struggling with lifestyle changes as well as their new celebrity status due to their success in sports. Pepper starts to push her body past its normal requirements putting herself in jeopardy.

Heart racing in this book

This YA is amazing! The feeling come right off the narration. Stacey is just awesome for this series. She’s helping me me feel everything with Pepper and Jace to the point where I don’t have a Clue where this love story will go.

The growth these two main characters are faced with are admirable. It’s just I’m not sure if they’re going to make it with all that Pepper has faced and possibly will face. I’m Thoroughly hooked on hearing all about Pepper and Jace now😳♥️♥️♥️♥️♥️

It just keeps getting better

Can their relationship survive outside pressures. I really really want this couple to succeed and this so far has been my favorite of the series. To me Pepper is very relatable and I can’t wait to see where the author takes this series. Loved the narration.

I love this series! If you like high school sports romance with drama and a dash of suspense, this is the series for you. Ali Dean always sucks me in with her characters. I love the way her heroines are strong, confident athletes, but they still need their heroes for love and support. I always want them to find their HEA, and that is no different for Pepper and Jace. I cheered them on through it all, and there are a lot of ups and downs to cheer through. The drama goes up with each book in this series. It has a lot of drama and teen angst, but I still really enjoyed it! There is just something about these characters that had me listening nonstop.

The narration for this series is well done. I read them first, so I already had voices in my head, but I still enjoyed Ms. Glemboski's narration.

Now Jace is in college with superstar appeal. Does Pepper have the confidence to handle it? or will her insecurities and jealousy surface when college girls try to make advances towards Jace? She has problems of her own with over exerting her training to better herself. drama from friends and family adds another element in this story.
Peppers self doubt , her confidence broken , add mystery, danger, jealousy makes the story interesting. Jace problems from his past, resurfaces and haunts them both. Will their love for each other survive?
Stacey Glemboski narration captures the emotions, of all the characters. She is an amazing storyteller, making the characters so real. Thank you for making it a wonderful listen. 🎧audiobookobsessionreveiwer🎧