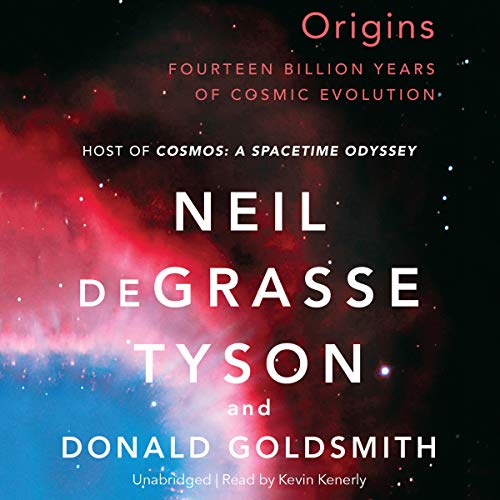 A thrilling and accessible tour of the cosmos

Our true origins are not just human, or even terrestrial, but in fact cosmic. Drawing on scientific breakthroughs and the current cross-pollination among geology, biology, astrophysics, and cosmology, Origins explains the soul-stirring leaps in our understanding of the cosmos. From the first image of a galaxy birth to Spirit rover's exploration of Mars, to the discovery of water on one of Jupiter's moons, coauthors Neil deGrasse Tyson and Donald Goldsmith conduct a galvanizing tour of the cosmos with clarity and exuberance.

Neil deGrasse Tyson's "Origins" is an adventure that begins during the earliest moment of our universe, and is written for the common person who desires a basic understanding of astrophysics. You'll learn about subatomic particles, black holes, revolutionary physicists, all in a manner that is clear and easy to understand. I strongly recommend purchasing the paperback as well, as I reread many chapters many times over, and being able to see specific terminology aids greatly. The audiobook is also read fairly quickly, as others have mentioned, increasing the need for the physical book for clearer understanding. I strongly recommend this book to anyone and everyone who wishes to learn the history and secrets of our cosmos.

Terrible narrator - I got a refund

Would you try another book from Neil deGrasse Tyson and Donald Goldsmith and/or Kevin Kenerly?

I would have LOVED to have listened to this book, but after 30 minutes of Kevin Kenerly's narration I turned it off and requested a refund.

What other book might you compare Origins to and why?

Any other book with an overzealous narration which lilts and sings and makes you turn off.

The lead author to have narrated.

Why this narration?!?! How sad!

Interesting, but difficult in the car

Interesting book, but following it in the car is not ideal due to its complexity. The performance is poor... Too exaggerated in intonation in a way it gets irritating

WHY CAN'T THE AUTHORS READ THEIR OWN BOOK?

Would you consider the audio edition of Origins to be better than the print version?

I listen to neil tyson because he sparks my interest. i could not grasp a lot of what was said because this kevin kenerly is a very boring narrator.

the story went off the rails at times, but hey... welcome to the cosmos.

Which character – as performed by Kevin Kenerly – was your favorite?

non- kevin kenerly wouldn't be my vote to narrate this book

narrator spoke to fast sounds as if the audio was stepped up after recording, solved by stepping down the reading speed to .5

so much knowledge in one book

This might be a good book, if not the reader. At least the performance sounds like he was in speed reading contest, consisting of words he does not understand. Avoid this version of this book.

The origins of the Universe are simply explained.

'Origins' is the best explanatory introduction to the formation and evolution of the Cosmos I have read! Co-author Neil DeGrasse Tyson is an astrophysicist and co-author Donald Goldsmith is an astronomy writer, and in my opinion, they make a good team. The book is the most coherently arranged science book on this subject I have ever tried.

It has five parts:

I learned a great deal that I had never understood or had known about recent mainstream discoveries and theories gleaned from the Hubble Space Telescope, the Galileo spacecraft that explored Jupiter in 1995, the Cassini-Huygens spacecraft which explored Saturn in 2004, and WMAP (Wilkinson Microwave Anisotropy Probe) which was launched in 2001 to study the cosmic background radiation.

Oh my, but I wish that fricking James Webb Space Telescope is completed before I die...

The two authors filled in many gaps in my knowledge, such as why most scientists think there was a Big Bang. A fascinating narrative in Chapter 1 'In the Beginning' mixes speculations as well as what has been gleaned from actual measurements and observations about the expansion of the Universe. I never knew about how particles and photons were so energized it took a while before the production of atoms was possible - about ten minutes into the cool down of the Big Bang.

I have heard endlessly (another Universe pun, sorry) about the cosmic background radiation (CBR) which had been accidentally detected in 1965 (pigeon poop was involved) after years of predictions by respectable Big Brain scientists since the 1940's. I did not have a clue why everyone thought it was proof of the Big Bang, only that the CBR was it somehow. The CBR was a proof of concept for astrophysicists because these now currently almost evenly distributed microwave spectrum waves go back to almost the beginning of time, maybe just when the Universe was 380,000 years old. These microwaves were once ferocious gamma-ray and X-ray photons from the Big Bang. Eventually the CBR will be in the radio wave spectrum in another one hundred billion years, not microwaves photons anymore, as these photons lose more and more of their original energy from the Big Bang. Scientists can actually detect, measure and have mapped visually the CBR to the beginning of the Universe, basically, microwaves coming from everywhere, with maybe some matter/gravity gaps, because atoms began to form then and gravity began to effect what had been a particle soup.

The temperature of the Universe, which scientists can measure, dropped as the size of the Universe expanded. How do they know the Universe is expanding, btw? The Doppler Effect of light! The explanation about how many ways scientists are using the Dopplar effect, such as to find exosolar planets, was astonishing!

Briefly, but with the most coherent explanations I have ever heard (kudos to the audiobook narrator, too), the author's explain the creation of atoms, space dust, types of suns and galaxies, dark energy, dark matter, elements (as in the element table), and what has been learned about some of the planets and their moons.

Included in the back of the book are a glossary of terms, a section for further reading, and an Index. Two sections of photos are in included that add depth (sort of a pun, you know, it's all about Space) to the explanations.

Heisenberg and Schrodinger are driving along the Autobahn when they are stopped by a police officer. The cop says to Heisenberg, who is driving, "Do you know how fast you were going?!" Heisenberg says, "No, but I knew where I was." "OK, smart guy," says the cop, "I'm going to search your car." So he does, and then comes back to the window. "Did you know you have a dead cat in a box in the truck?" Schrodinger says, "No, but I do now."

A Bland Summary of the Science behind our Origins

This book attempts to provide a science based summary of our history of our universe and humanity. While nothing is wrong with the book, the subject matter is too broad too allow the material to be probed with any depth to make it interesting.

Fun read as usual for Tyson

I wish Tyson had narrated it, but great read! Narrator is strong even if not the author himself. Beware if you've read his other books though as some material is recycled. The great weight of the text is new material and interesting, so go for it.