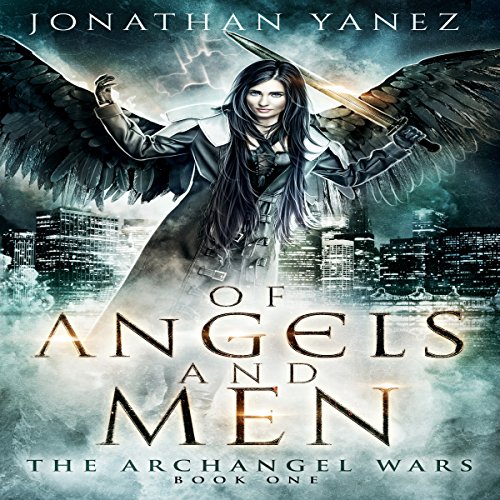 Of Angels and Men

The Fallen have been content to live quiet lives on Earth since their banishment from Heaven. Rules have been placed for human safety and their celestial counterparts police them day and night.

New information will spark an uprising. The Colossus of Rhodes, one of the Seven Wonders of the Ancient World, holds a secret that will tip the scales of power to whatever side resurrects it first.

Alan Price is a man with an army of issues. Fear, anxiety, depression and anger are only a few of the things that haunt him daily. It is only when his darkness becomes total, that his true purpose on earth is revealed. Alan is something more than human. As abilities manifest themselves, answers come in the most unexpected form.

Michael knows something big is coming. Whispers in the wind are hinting at the Fallen making a move. The Archangel must gather his force and recruit those who have been deemed worthy. One name in particular holds special meaning. Alan Price is a Nephilim, a human that has been chosen to serve Heaven and granted talents of superhuman proportion. In this man more than any other, Michael senses a power even he does not understand.

Now Alan is sent on a journey that will take him from the Island of Rhodes to the vast desert of the Sahara, all in a desperate race to stop the Fallen and their plan to rule both Heaven and Earth. The enemy is shrewd and brutal, with no regard for human or supernatural life. In order to have any real chance at stopping the enemy, Alan must first silence the demons within.

This is "THE BOOK" you want to read!

Where does Alan Price and the Colossus of Rhodes rank among all the audiobooks you’ve listened to so far?

What other book might you compare Alan Price and the Colossus of Rhodes to and why?

What does Aaron Wagner bring to the story that you wouldn’t experience if you just read the book?

Aaron has done his research.

Total drew me in.

"This audiobook was provided by the author, narrator, or publisher at no cost in exchange for an unbiased review courtesy of AudiobookBlast dot com."

Not Your Typical Paranormal/Fantasy Book

What made the experience of listening to Alan Price and the Colossus of Rhodes the most enjoyable?

The way the narrator made the characters come to life.

Alan Price...I fully related to his character and his experiences as they were something I came across in my own life.

Which character – as performed by Aaron Wagner – was your favorite?

Yes, if I wasnt a lady with a busy/hectic schedule. I read the ebook version in one sitting 😊

This book wasn't your typical paranormal/adventure book with angels, nephilims, etc. It was wondefully written with a strong message encouraging bully victims to prove they are not losers. They can seek professional help and not be scared to make something out of themselves instead of resorting to violence. The audio book version was excellently narrated that you could envision the characters and the scenes coming to life in you imagination. Hoping and praying that this either is made into a TV series or a film.

What made the experience of listening to Alan Price and the Colossus of Rhodes the most enjoyable?

Wow Aaron Wagners voice draws you into this tale of Angels and Nephilim and the fallen. From battling depression and anxiety to being saved after falling from a roof young Alans would is turned upside down, he now finds himself with powers beyond his dreams. As his powers grow he will help the Angels defend earth and those trapped here

alan
From battling depression and anxiety to being saved after falling from a roof young Alans would is turned upside down, he now finds himself with powers beyond his dreams. As his powers grow he will help the Angels defend earth and those trapped here

What does Aaron Wagner bring to the story that you wouldn’t experience if you just read the book?

Includes a unique take on Nephilim.

SERIES INFO: This is Book #1 of 4 in “The Nephilim Chronicles.” The 4th, and final, ebook Horsemen of the Apocalype was just released. The first two are available on audio so far.

Alan is a deeply troubled & conflicted character, but despite his initial bad choices, he remains someone we can care about and root for. I like that, even with superpowers, it is made clear that his emotional struggles haven’t all gone away, and may remain something he has to deal with for life.

I like the portrayal of his Psychiatrist (she doesn’t bash reading and seems very real), but maybe she should have started him out with something easier than a school dance to get him out of his shell.

There is a good mix of male and female characters on both sides of the conflict.

I liked the very first scene and felt like it introduced his dilemma well. BUT, then all the flashback - flashforward - flashback began, and I thought it hurt the connection I was trying to form. I think maybe it would have been better to start with the bar scene (where he finally meets someone who can tell him what is going on with his apparent superpowers) and then do a single flashback which showed how he got to this point.

Other issues: Sorry, but keeping a book that tells how to build dangerous weapons just for cultural preservation is stupid, no matter how you try to explain it away. / There were waaay too many chapter breaks, and they don’t always come at a logical point. / A certain character's repentance seems to come too easily.

The ending wrapped up the current story arc, but gave us a very surprising twist to set up the next book (if Gabriel, is the Gabriel).

NARRATION: Nice sounding voice / A small thing - his “book text voice” (when Alan was reading) was especially good. / Female voices are ok. / Listened on 1.25 speed (my usual) -- Cons - His non-dialog narration was a bit matter of fact for me.

FAVORITE PART(S): Bad guy in a snazzy suit… and slippers / The zoo (wish we could have gotten the whole story) / My favorite scene is hard to include without spoilers. It was when one of Alan’s new “gifts” unexpectedly defends him in the museum (think blue).

I received this book free in return for an honest review, courtesy of Audiobook Blast.

While I found the author talented I had a hard time connecting to the story.I believe it just isn't a good fit for my tastes.I did like that the main character is a flawed yet strong young man,who struggles with his self worth and depression.The book has some interesting ideas and a unique take on angels and nephillum.The narrator did a good job portraying the characters and has a pleasant voice.I purchased the e-book,but received an audiobook from the author via in exchange for an honest review.

Where does Alan Price and the Colossus of Rhodes rank among all the audiobooks you’ve listened to so far?

I really enjoyed listening to the audio book. I thought Alan was an interesting character in the book.

What other book might you compare Alan Price and the Colossus of Rhodes to and why?

I can't think of another book like this one.

He was a great voice to listen to. He was did a great job with the slower parts of the book and was able to get the emotions across when the book started to become more fast paced.

No it is a little too long for that. I think of that as a plus.

The book started out slow. Alan is a bullied teenager that has lost what little family he had. He than finds out who he really is and what he is. The book picks up from there into a fast paced book. He has many emotionally up and downs that he has to overcome. He is a lovable character in the book. It was nice that he was so good at heart and thought of others even when it seemed like no one hardly thought of him. This is a really good book about the good vs evil. And the good always needs to win in the end for the good of all.


I was provided this audio book at no charge by the author, publisher and/or narrator in exchange for an unbiased review via AudiobookBlast dot com

The wonders of the world brought to life

Would you listen to Alan Price and the Colossus of Rhodes again? Why?

Yes, definitely and I'm looking forward to enjoying the other books in this series. I thought that it was interesting enough and complex enough to warrant another read in the very near future. The books has some movement through time periods so another read will also give me a second chance at getting all the details of the characters and plot.

Alan Price is not your typical hero and I liked seeing the book narrated from his point of view and seeing his struggles with his self identity. Even his new found powers don't completely alleviate his problems, and I liked seeing him start out on this journey of discovering he was important.

Aaron WAgner's narration is great. It's important to enjoy the sound and tempo of the person narrating and I definitely felt this way with this book/narrator.

Yes. I really enjoyed it.

I'm looking forward to reading the rest in the series. The element that gave the most pace to the story was the superb world and character created by the author. I liked seeing a character grapple with anxiety and depression and not have it painted as something that gaining super powers will fix.

Novel reads like it was written by someone who watches way too much anime, and doesn't spend enough time reading. The book begins with a very promising story arc, but I couldnt finish it past the 5th chapter; the writing leaves much to be desired.

Liked the story but this narrator is one of THE worst I've ever heard. He races through his reading as if trying to beat a time clock. Mushing words together, not speaking clearly. He made it an arduous task to listen. Poor choice.

If you could sum up Alan Price and the Colossus of Rhodes in three words, what would they be?

What was one of the most memorable moments of Alan Price and the Colossus of Rhodes?

***Spoiler Alert***I loved when Alan got his wings. It was my favorite part.

Have you listened to any of Aaron Wagner’s other performances before? How does this one compare?

This is my first audiobook of Aaron's that I have listened to. He did a wonderful job.

This audiobook made it hard to leave my room. I didn't want to pause it, to do anything. I loved everything about it.

I can't wait to listen to the rest of the series. It's such a wonderful story line.