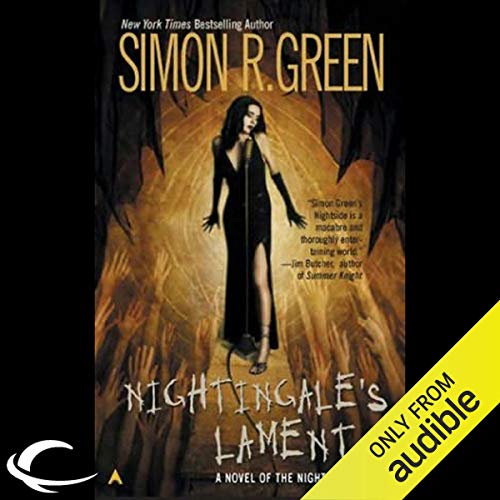 Taylor is the name. John Taylor...My card says I'm a detective, but what I really am is an expert on finding things. It's part of the Gift I was born with as a child of the Nightside - the hidden heart of London where it's always three a.m., where inhuman creatures and otherworldly gods walk side-by-side in the endless darkness of the soul.

Assignment: Find out why the local diva called the Nightingale has cut herself off from her family and friends. I'm also wondering why her suicide-prone fans think she has a voice to die for. Literally...

I have now finished listening to all nine novels in the Nightside series -- a feat that took most of the last six months, as I treated them like radio series by listening to them while I was doing my morning walk along the streets of the city I live in. That's nearly seventy hours of really interesting storytelling. I envy those of you starting the series from the beginning as you have a lot of truly great listening ahead of you for fantasy, when well crafted, has the power to pull you out of this existence and transport you to new places; it's pure escapism at it's very best.

Now I've said it before, but I'll repeat it again -- all of these audioworks have great story, terrific narration, appropriately used music, and crack production, which is true of all the audiobooks that Audible does in house. Certainly I was really, really impressed at how well the narrator, Marc Vietor, does in creating a believable cast of characters who each have their own distinctive voice. Dead Boy is voiced as a weary, seen it all sort of zombie (or perhaps not, as Green doesn't say that he is such a creature; nor does Green say that he isn't). Dead Boy sounds different than John Taylor, and all of the other characters are also voiced in a manner that lets you know who is on stage.

Nightingale's Lament has everything I like in an urban fantasy -- an interesting and very cool protagonist, snappy dialogue, loads of violence, quite a bit gore, a smidgen of sex, weird characters, a bit of a mystery, and a pacing that never lets up. And for once, there's a reasonably happy ending for the client, a rare occurrence in the annals of John Taylor!

Another in the long series of John Taylor. For those of you that enjoy urban fantasies with very little romance and quick plot turns and twist this one is for you!!

Green at his best.

Would you consider the audio edition of Nightingale's Lament to be better than the print version?

Nothing is like a real book. I do find it nice to have something good to listen to on trip.

If you can go though a Nightside book and not laugh, chances are your already died.

listened to lore than once

All the characters are great. Fantastic Narration. I love the entire series and listen to it over and over.

love this, nightside before bed time, like a gritty Dresden files in a world of night side.

this was the best book so far! had a good balance of the horror and comedy that I needed to get me through the night side. I enjoyed the twists and turns that the story put me through. with each book I feel like I know more about the night side, and the layers this book added makes it feel more and more like a real place.

If you like comic books, you'll love this series.

What did you love best about Nightingale's Lament?

This whole series of Night Sides tales is totally fantastic and unbelievable, but full of truth about the human condition.

The clichés are ridiculed even as they're expressed.

Have you listened to any of Marc Vietor’s other performances before? How does this one compare?

Marc Vietor has an amazing ability to portray a wide range of characters.

Simon has an amazing mind. The world of the Nightside is amazing. wish I could visit. :)

Just ok. Able to to stick with story by 3rd try.

This story was tough to follow. I had to start the story over twice. It wasn't till towards the end, that the story picked up and by then, truly, not by much. I kept with it though because I really like the narrator, I have the complete series and I really want to know who John Taylor's mother is and the full extent of their powers, abilities and purpose(s). Besides, that place called nightside is like a garden variety of paranormal soup filled with all types supernatural paranormal stuff.

Imagination, mythology, a gritty P.I., and a wonderful narrator!
I highly recommend this series.