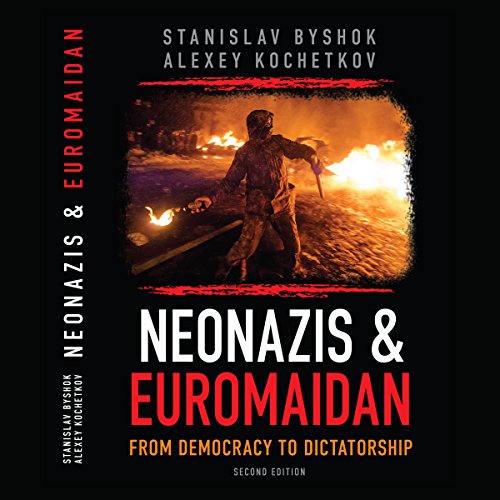 The audiobook describes the development of Ukraine's nationalist groups since 1991 until present day. It focuses on the history of the parliamentary right-wing radical Svoboda party and the nonparliamentary Right Sector movement. The authors study the ideology, psychology, and methods of political struggle of these structures. The experts seek to answer the question: How did the radical neo-Nazi groups manage to become the key driving force behind the Ukrainian revolution?

A low-quality piece of propaganda

This book is an example of a low-quality (birth technically, the text is read by a robot, and artistically) of Russian propaganda. I cannot understand how Audible would even accept such a low quality audio book in its catalog.

Explanation of events which led to Euromaidan

I would recommend this audiobook who wants to understands the history of political movements in Ukraine and underlying reasons which led to Euromaidan revolution and an ongoing civil war in Ukraine.

This is History book with many characters.

What does Jack Chekijian bring to the story that you wouldn’t experience if you just read the book?

Jack Chekijian clear voice and perfect diction makes it easy to follow storyline in this audiobook. In just over 7 hours listener receives a volume of information and gains understanding of events available to very few analysts.

I found history of Right Sector partuculary interesting.
Also when you listen to Manifesto in appendix chapter - you will find many parallels to ideas once expressed by Adolf Hitler about super race and clearing Europe from all inferior races.
And then you realize the danger of such ideas taking hold even in modern day and age.

The book “Neonazis & Euromaidan” was presented in many major cities in Europe – Brussel, Berlin, Paris, Moscow, Warsaw, Athens. And in some cities the book was presented twice. The book was also (presented) announced in both European and Russian parliaments.  Since its first presentation, the authors never faced a single instance of criticizm on the subject and content of this book. However, almost all book presentations were accompanied/confronted by provocations of some EU residents supporting new Ukrainian government. Sometimes circumstances led to us to change time and places of the meetings with readers. On the contrary, the other group of people, who originally came from Eastern Ukraine, and now live in EU, visited our presentations and thanked us for informing the public about the tragic events that are taking place in their homeland.

Public interest to this book by Europeans, who want to know an alternative to the one-sided view of the events presented by the mainstream media, have been great resulting in the second edition of “Neonazis & Euromaidan” being sold out in just one month.

The latest, or the third, edition of the book practically presents the same material, as in its previous edition, but it is updated with more reference materials to the sources of information found in the book. This references should help any interested reader, or a researcher, to expend further on the information found in the book through their own research on this topic.

We dedicate this last edition of the book to the memory of all those who died in imposed civil war in Ukraine that started shortly after “Euromaidan”.