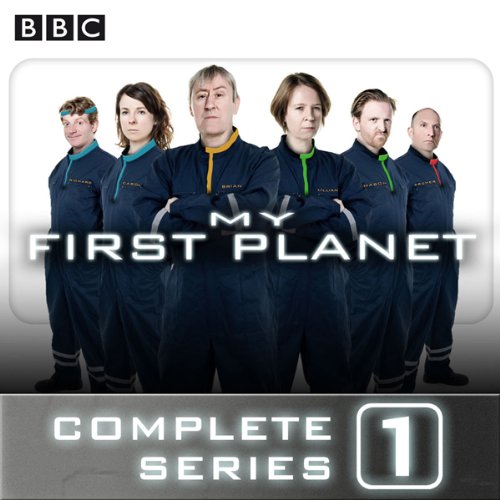 My First Planet: The Complete Series 1

The complete first series of My First Planet - a sitcom set on a shiny new planet, starring Nicholas Lyndhurst, Vicki Pepperdine (Jo Brand's Getting On) & Tom Goodman-Hill (Another Case of Milton Jones)

The story so far: Unfortunately, Burrows the leader of the colony has died on the voyage, so his Number 2, Brian (Nicholas Lyndhurst), is now in charge. He's a nice enough chap, but no alpha male, and his desire to sort things out with a nice friendly meeting infuriates the colony's Chief Physician, Lillian (Vicki Pepperdine), who'd really rather everyone was walking round in tight colour-coded tunics and saluting each other. She's also in charge of Project Adam, the plan to conceive and give birth to the first colony-born baby.

Unfortunately, the two people hand-picked for this purpose - Carol and Richard - were rather fibbing about being a couple, just to get on the trip. Add in an entirely unscrupulous Chief Scientist, Mason, and also Archer, an idiot maintenance man who believes he's an "empath" rather than a plumber, and you’re all set to answer the question: If humankind were to colonize space, is it destined to succumb to self-interest, prejudice, and infighting? (By the way, the answer’s "yes". Sorry.)

In the first episode, it's Day 1 on the colony and they’ve lost the food, the air, the commander and the mood music.Meanwhile, Chief Physician Lillian makes a terrible discovery about Project Adam.…

In episode two, it's Day 7 on the colony, and Mason stirs up an ethical nightmare involving a clone, a murder, and some dreadlocks. Meanwhile, Archer the handyman attempts some repairs on his own head.

Episode three is set on Day 27 and the colonists are torn between Richard’s newsletter and Archer’s hot pants. And which is more dangerous - Brian’s monkey wrench or Lillian’s "vitamin drink"?

And in the last episode of the series, a queue for the loo and a rogue backrub threaten to blow up the colony. And just what is Lillian’s "Special Skill"…?

This was an entertaining escape, the humor is a tad on the silly side. Good for something to lighten the heart in audio book format.

Where does My First Planet: The Complete Series 1 rank among all the audiobooks you’ve listened to so far?

Everything ranks under Cabin Pressure (it just can't be beat) - however, this has some good voice actors and a solid story line so I would list it as number 3 of my top 5 comedy radio series from the BBC. Keep up the good work BBC4!

Wish this for Fred and Rosemary

I sincerely hope they get to listen to this and the other one. I also hope more are yet to come.

It really could have been a neat series--and they did pick up steam towards the end of the season, but a lot of it just fell flat, and was more bizarre than actually funny.

Cabin Pressure! A very funny British radio play series, with amazing voice acting and even better writing. It's also quite heartwarming towards the end.

All of the actors did a good job; the characters were distinct, and consistent, and none were unpleasant to listen to...except for the flat writing.