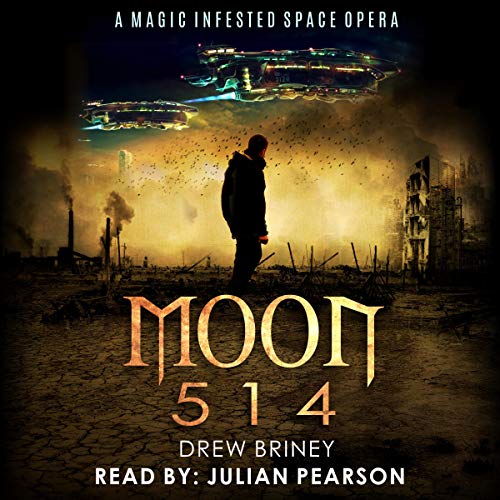 Moon 514: Blaze and the White Griffon

It's inevitable: Technology must evolve alongside magic.

Trained from boyhood to be protectorate of the only known community of survivors in a post-apocalyptic world, Blaze takes a devastating turn when he fails to save the Order from an unexpected and devastating attack. When his mentor turns executioner, Blaze gets arrested for treason and falls victim to Toka's secret gene-splicing experiments. He’s further thrown into confusion when his legendary weaponry skills prove useless against the psionic powers of a small and unintimidating alien woman.

After Evelia, his unquenchable crush, becomes the alien’s unexpected apprentice, Blaze hearkens to the Earth’s call to lead mankind’s last few survivors to the destiny she envisions for them: a technologically advanced civilization governed by magic.

I'm not sure that I would have read this but it was a good listen. Although, at parts it got a little boring, but was good listen in the end. It kept surprising me. The narration was okay. I'd recommend it story any sci-fi/fantasy fan.

What an excellent story!

What an excellent story! The world building was amazing and the character development was also incredible. Blaze is a young warrior living after the Third Holocaust and his attempts to help his people. There is so much going on with betrayal and danger at every turn. Genetic enhancements are also a part of the story with some good and some not. It was hard to tell as the story progressed who was a enemy and who was an ally. It was very exciting and fast-paced. The endings felt abrupt to me but there is room for more stories.

The narration was great and I had no problems listening.

A good mix of different themes

This story oscillated between loved it and a bit boring. I mean it - a first. This was the debut story from Drew Briney so I consider it a very good work.
The theme is very interesting as it mixes space, aliens, magic, genetics, and many other themes in the same story, including conspiracy schemes. The characters are great and very well developed, as are the spaces and the scenes. I don't recall a modern story to be so thoroughly described. And here starts the mixed feelings. I do like descriptions and know what the characters are thinking but in the listening format we end up with endless paragraphs, sometimes, with virtually no dialog. We get to see the story from every character point of view - in one side that's great, in the other it makes the story lose a bit of the mystery and the narrator is like describing a History lesson were we analise the story from all angles. The narrator voice doesn't help in this regard, as it really feels like a history teacher (just my opinion though).
Now don't get me wrong, the story is great and original, but I think maybe I would like it better reading it, or it could be reformatted a bit to separate the different points of views better (This is the author writing style, so I strongly believe it's his right to choose the story approach).
In the end, a great book to pass to screen - a lot of the story telling development is already well done and it would be great to see the universe, characters and decor/fashion imagined by Drew.

Strange view of an apocalypice world

This is an interesting and strange view of humanity in an apocalyptic world. Blaze and Evelia stand out and lead the humans of this strange mix of technology and magic. For me, I feel it is the continued genetic experiments that lead the magical woman to be able to help Evelia use what would be called psychic powers. (using the energy around to something different) It's only magic when we don't understand how it is done, example the witches that healed people using herbs in the middle ages. The narrator was good and held your interest, but did not separate voices, so sometimes I would wonder who's mind I was actually in at the time. I have to say what was the 2nd to last chapter really about. Is it a teaser for a new book, or just a reminder that our world can never be perfect? For me; it was out of place and wrong to put it here. It should have been put as the prologue or the first chapter of the next book, otherwise this story is well-written.