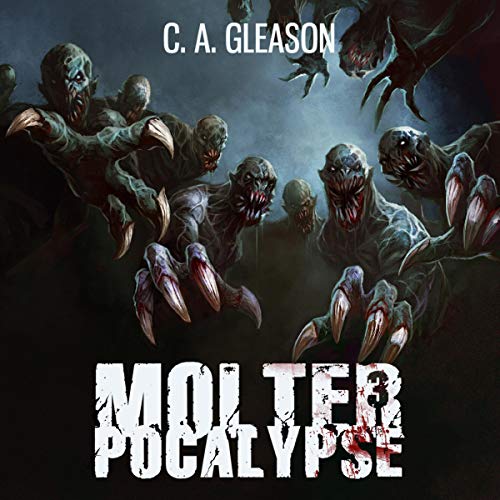 The survivors call it the Molting. It spread across the planet faster than anyone could anticipate, turning people into bloodthirsty creatures, abominations of nature. Now, Molters swarm every landscape, hunting the few remaining humans.

Former army grunt Jonah Browne helps his family survive the only way they know how: hunting down what hunts them from their secluded cabin in the remote German Mountains. It’s only a matter of time before the cabin is overrun.

After a shootout with a rival survivor community, Jonah and his family have to find a safer base. He sets out on his most dangerous mission yet, leaving his family vulnerable. Jonah must rely on his survival skills to escape the unstoppable horde while dealing with the desperation of his fellow men.

In a world filled with monsters - both unnatural and human - will Jonah survive long enough to return to his family?

Again, another great book! Hoping there will be another book! Want to see if they find the ship and he makes it home! I am hooked! Narration again was outstanding.

really liked that it followed the main guy. lots did not make it. very good, one of my favorites(all 3 were)

i got free copies.

I really enjoyed the third book in this series

First off, I received a free copy of this audiobook in exchange for an unbiased review.
This is the third book in this (awesome) Molters series. I really enjoyed it when the story not only focused on jonah, but on those close to him, fleshing them out here and there. I felt as though I really didn't know where the story might be going. While it's nice to be able to puzzle out where things might end up, not being able to do so can be refreshing. This book kept me on the edge my seat for the characters, even the bad guys! I think that's owed to Gleason's talent as an author.
How was the narration? Well, if you've listened to the first two books, you generally know what you're getting. For those of you who haven't.. Drummond really does an exceptional job. For those of you who have read the other books, you'll find he can impress you still.
Realllly hope for more in this series, so little of the Molterverse has been seen.

A tsunami of cascading death!

The Molters continue to evolve, the new strain becoming more unpredictable and dangerous. Jonah, Doreen, and daughter Hyka have been surviving in their mountain cabin while Jonah continues to make security rounds looking for behemoths. A new enemy has appeared. This new adversary wars against the Molters but their tactics utilizing “the draw” are a threat to Jonah and his family. We follow Jonah as he battles Behemoths, Molters, Infectors, and the newcomers as well. I was given this free review copy audiobook at my request and have voluntarily left this review.

I’ve listened now to the first three of this series and so far I really like it. I’ve listened to a lot of post apocalyptic books and most are all the same just different people ,same scenarios . I like this because it’s different instead of the same ol emp or virus it brings you monsters, some creature and some human. Something different and interesting. The main characters are likable and you can connect with them whereas some books I’ve read you really don’t care if they survive or not to be honest. Hyka, not sure if that’s spelled correctly or not lol, the 8 year old little girl reminds me a lot of my daughter Ellie who’s also 8 in so many ways so FYI to the writer I will be very upset if anything happens in future books to her. The narrator I think does awesome job with different voices as well . Long story short if you are looking for apocalyptic series, something out of the norm you won’t be disappointed and I definitely recommend this one. I was given this audiobook in exchange for honest and voluntary review. Can’t wait for the fourth one!