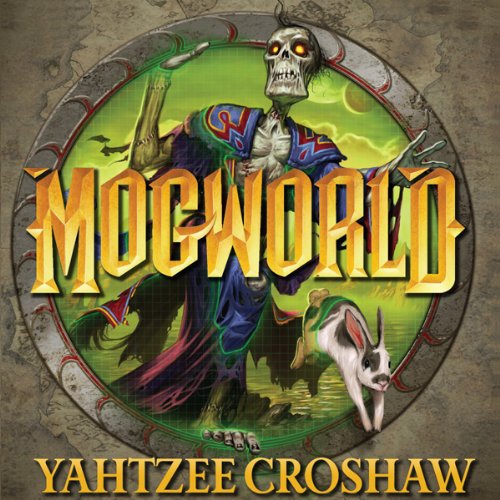 In a world full to bursting with would-be heroes, Jim couldn't be less interested in saving the day. His fireballs fizzle. He's awfully grumpy. Plus, he's been dead for about 60 years. When a renegade necromancer wrenches him from eternal slumber and into a world gone terribly, bizarrely wrong, all Jim wants is to find a way to die properly, once and for all.

On his side, he's got a few shambling corpses, an inept thief, and a powerful death wish. But he's up against tough odds: angry mobs of adventurers, a body falling apart at the seams and a team of programmers racing a deadline to hammer out the last few bugs in their AI.

Mogworld is a comic fantasy novel in the tradition of Douglas Adams and Terry Pratchett, and is the debut novel from video-game icon Yahtzee Croshaw (Zero Punctuation).

"The first legitimate breakout hit from the gaming community in recent memory" ( Boing Boing)
"Yahtzee consistently makes me laugh, and even though I dig computer and electronic games, he has cross-genre appeal to anyone who enjoys a sharp wit, unique sense of humor, and plenty of originality - not purely gaming fans" ( The Future Buzz)

as a first expérience this is good, funny and with à very tight and satisfying story for anyone liking mmorpgs

I bought this for the same reason almost every one else purchased it for, I'm a fan of Zero Punctuation. On his blog, Yahtzee wrote that it was really hard to learn to speak slowly again and if you listen to the audio sample you can tell. The narration early on is stilted, as if he's trying to compensate. Likewise, the humor in the beginning is strained and trying too hard. He tends to reuse and abuse his metaphors, and over use words such as "insanely" and "suddenly". Sadly, these and other technical problems appear throughout the book.

However, if you love Yahtzee and are prepared to be both patient and forgiving, this book will reward you in the end. And by patient I mean you need to get through at least the first 3 hours. By that time, Yahtzee's voice has warmed up and the story picks up enough to let the jokes occur more naturally. The main character is endearing and the story amusing and involving. Yahtzee does a good necromancer voice too, though my favorite voice was Slippery John. The ending was appropriately poignant.

This book is better than other first novels by game designers (it made me think of Johannes Cabal: Necromancer). Yahtzee hasn't ascended to the pantheon with Pratchett and Douglas Adams but I will pick up his other book and hope for more author narrated audio books from him in the future.

Better than I could have hoped for

As a fan of Zero Punctuation, I went into Mogworld thinking I knew what to expect: a parody full of whip-sharp language and colorful similes. What I didn't expect was the honestly brilliant metanarritive about how video games are made, played, and perceived, woven into an unusual but engaging adventure story. The plot was refreshingly original, the characters were distinct and memorable, and the world felt right, just familiar enough to me, as someone who's played a lot of sword and sorcery RPGs. It was definitely the right choice to have Yahtzee narrate the story, because he imbues it with so much personality. Overall, a joy to listen to. Five stars.

Listened to this twice in a row - lotsa fun!

The premise is great - a former magic college student killed by a rival warrior university is raised 60 years later to be the undead minion of an evil Necromancer. Turns out the Necromancer is a great boss and the new walking corpse, Jim, comes to enjoy working in the Doom Fortress...until it's destroyed, with Jim and two other minions the only ones to escape.

The cast of characters, to me, were un-freaking-believably entertaining. I even loved the villains.

Also, the narrator was really something. At first, I was a little disconcerted since he so unconventional compared to others on audible. But after a few chapters, I found he was perfectly suited to bring to life the various characters. Then I discovered the narrator is also the author, so of course he had things well in hand - just took some getting used to.

Loved the story, but the audio quality is was lacking

Loved the story. It was fun and an original take on a story you have heard before.

The audio quality was lacking. Volume went up and down. You could here the pages be turned in the background. The narrators tone was periodically off, like he had just started the recording after a long day at the office and he just wanted to sit down and have a beer.

It’s a shame. The story was enjoyable and the narrator in most places did a good job, there were just enough issues that it took I out of the story.

If you like Monty Python that you will love this audio book. I've listened to this book many times and it still cracks me up. The author/narrator does a fantastic job of creating unique voices for each character. Makes it feel more like a radio play than an audio book.

What made the experience of listening to Mogworld the most enjoyable?

Totally different, something you wouldn't expect.

What other book might you compare Mogworld to and why?

No other book that I have read is like Mogworld.

Have you listened to any of Yahtzee Croshaw’s other performances before? How does this one compare?

Laugh mostly. Got a little tedious near the end.

Gives you a little laugh, a chuckle here and there. Something that is totally different and unusal. Love the "gang" and their witty comments.

Hands down, this is the funniest book I have ever had the pleasure to read or listen to.

I would absolutely recommend this book to anyone who enjoys the fantasy genre. Not only did I enjoy it, this is the only book to my memory which made me actually laugh. And when I say laugh, I don't just mean a dry chuckle or smirk - I am referring to a big full belly laugh.

With this book Mr Croshaw has made myself a fan of his work.

I'm a big Z Punc fan. When I heard Yahtzee had done a narration of his book I had to have it. I finished it in a couple of days. If you enjoy Terry Pratchett, John Scalzi, or enjoyed Ready Player One by Ernest Cline, chances are you will enjoy Mogworld. If you are also a fan of Crowshaw's reviews you'll appreciate the additional level of humor.

Great story read by the author.

Would you consider the audio edition of Mogworld to be better than the print version?

Yes, because author's sense of humor shows even better when you hear it in his voice inflections.

Have you listened to any of Yahtzee Croshaw’s other performances before? How does this one compare?

Yes. It was of the same caliber to his better works.

If you have the time.

This is a book that resonates with me cause I play a lot of video games. And it made me chuckle and laugh at a few places. It can be a little confusing but i really enjoyed it.

the story ist original and I really liked it. the speaker and writer yahtzee is well known for his YouTube series zero punctuation and I guess most people who buy this audiobook know his type of humour. the recording sounds like it is done with a cheap headphone though with a bad noise filter applied, which really distracts from the listening pleasure.

Loved it, from beginning to end. I already owned the paperback, but with the author's narration (even though it is noticably his first, the later books get much better when it comes to character representation), this is a joy to listen to. Story, character quirks, references - it's all there and it's highly entertaining.

I thought the title was optional...

What I expected and more. Sarcastic, cynical, funny as hell and with a story that ended up drawing me in more than I had expected from the summary. Been torn between laughing and crying about the ending ever since I finished it.

Suicidal, undramatic, ironical, funny, dry (humor),... yeah those adjectives fit the book perfectly.
Don't expect a grand scheme, but rather a "dry humor"-book like a Terry Pratchet novel. Focus is on wordplay and a humorous, observatory presentation of the story, while keeping everything borderline FSK12-compliant. Not great, but not bad either. And it gets better the further you get.
The performer is the author himself and actually does a good job - far from perfect mind you (background-noise, a Bit of noise in general, swallowing, his reading performance is not on an established level yet) - but good nontheless.