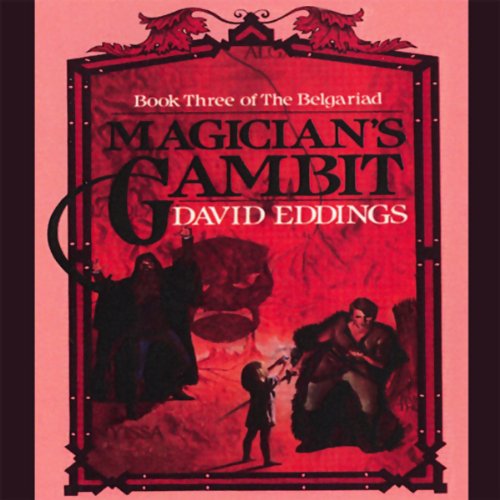 Ce'Nedra, Imperial Princess of Tolnedra, is confused. Everyone knows the tales of the Orb protecting the West from the evil god Torak are just silly legends. But here she is, forced to join a dangerous quest to recover that stolen Orb. No one believes in sorcery, but Garion's aunt and grandfather seem to be the fabled sorcerers Polgara and Belgarath, who would have to be thousands of years old.

Even young Garion is learning to do sorcery. He's just a farm boy, totally unsuitable for an Imperial Princess. Yet for some reason, she has the urge to teach him, brush back his tangled hair, and comfort him. But he is going to a strange tower in the center of all he believes evil, to face some horrible, powerful magician, and she can't be there to watch over him. She may never see him again!

Share the fantasy: listen to more titles in the Belgariad series.
©2000 David Eddings (P)2003 Books in Motion. This recording is produced by arrangement with the Ballantine Publishing Group, a division of Random House, Inc.

Adventures and Action for the Audio Mind

Would you consider the audio edition of Magician's Gambit to be better than the print version?

I've read, and re-read this excellent adventure series by David Eddings several times over the past 20 yrs., but just recently purchased it in audio form. I must say Cameron Beierle has a gift with bringing out the accents and attitudes of each character. It took me some time to warm up to his voice, because I had already established the personalities in my head, but once I opened up to his reading of the story, it all became new again!

What was one of the most memorable moments of Magician's Gambit?

When Ce'nedra found out she was going to marry Garion

His voice is warm and full, and perfect for bringing a character to life.

When Garion revisited Faldors farm.....that moment, among others brought me to tears.

If you like Lord of the Rings or Chronicles of Narnia, you will most definitely love this action/adventure series.

I stand by my statement in my review of Pawn of Prophecy. The best narrator for the Belgariad novels, for me at least, has always been and will always be Jon Beryl, who narrated the Talking Book versions. But Cameron Beirle does a better job of giving the characters personality. The problem he sometimes has is that sometimes multiple characters sound exactly the same. He also still often has difficulty pronouncing the same names the same consistently. But as I said before, this can perhaps be excused. Not only does he have to try to give voice to names that are difficult to read let alone say out loud, but I suspect that English wasn't his native language judging from his accent. That would make it harder on anyone. But he tries and he does a good job despite these difficulties. I've always wanted the Belgariad and Malloreon to be avaible in audiobook form commercially, but for years nobody seemed interested. Thanks to Books in Motion I got my wish.
As for this book, Cameron has some more new characters to deal with. He did a good job capturing the ancient sorrow of the god Mara and the evil of Ctuchik, as well as his fear and panic in the final moments of his cofrontation with Belgarath. He also does a good job on the emotionally conflicted Relg. I said before the Cameron was beginning to find his footing with Queen of Sorcery and he does seem to be improving with each book.

I remember reading these books as a teenager and enjoying them; as I currently walk to and fro work, I thought they'd be ideal for a bit of commuting brain candy. The stories are still as much fun as I remember, although the constant repetition of each character's establishing traits can be a little trying - for example, try taking a drink every time someone says 'you're a bad man, Silk'. You'll be on the floor in no time...
Unintentional hilarity is provided by the narrator, who is obviously a perfectionist as he strives constantly to improve his characterisations, often in the middle of a sentence! So Silk is either from Eastern Europe, Chelsea, or even Turkey or Greece, depending on what the narrator's feeling like - often's he's all three in a sentence. This can be annoying, but at least not as bad as it was in Queen of Sorcery, the book preceding this one (...all the Knights sounded like John Cleese in Monty Python and the Holy Grail). Less cheese, please.

The Prophecy continues I cant even cover everything that happens in this book. So much happens in each book its hard to remember where one book begins and the other ends. I do no Ce'Nedra is accepting her fate as a bride to Riva. She's coming to believe in the impossible. Garion is coming into his power. Part of the gang separates for safety while others are still coming along. I can not imagine the planning Belgareth and Polgara had to do to ensure the Prophesies would happen. I love how the group seems crazy and yet it fits and works perfectly together. I cant wait for the rest.

My Will and My Word

Flawless story and storyline. love the characters and how they live and love. A true adventure.

The next best thing to reading the books yourself.

What made the experience of listening to Magician's Gambit the most enjoyable?

Beierle gets a bit carried away with off-the-mark accents (still fun to listen to, though), and mis-pronounced names, but he probably has the widest range of voices of any narrator I've listened to so far. And he does a good job of voice acting, not just reading.

Beierle had his faults--he gets a little carried away with his accents (and I think he misses the mark significantly on a few), but his narrations are the best so far.

However, I seriously wish the narrators would put in the time to get the name pronunciations right. I really don't understand how they can mangle some of them so badly. Here's something "straight from the horse's mouth" I found after a 15 second Google search.

If you could sum up Magician's Gambit in three words, what would they be?

Prince "Silk" Keldar would have to be my favorite! The quick witted and slick-tongued little man never fails to surprise, impress, and humor me.

What does Cameron Beierle bring to the story that you wouldn’t experience if you just read the book?

Cameron Beierle is his own cast. The voice talents used throughout the series is never duplicated between characters, and always premeditated. It's as if Cameron is so engrossed into the story that he feels what each character feels and knows how to portray their tiredness by yawning and talking at teh same time, or their mysticism with a inquiring tone, and, of course, malicious humor, as perfectly portrayed by Silk. I must admit, that if he doesn't play the voice of Silk when ever a movie is made, I'll be sorely disappointed with almost any other portrayal of the sharp faced and sinical little prince.

Admittedly, I listened to it over the course of 4 sittings, because of minions running around the place, however, it was captivating enough that when I listened to it while dead tired and falling asleep, I stayed awake for a couple of more hours because of the compulsion to know what Beierle is gonna say next.

All the readings I have made my way through have been great so far.

My only issue w/ this book is the charecter Relg (sp?), the cave diviner. He plays an essential role, but he is by far one of the most annoying literary charecters I have come across.

I love this series! and I have enjoyed listening to it. it is very well read and I'm getting the next book audio as well.

What can I say? The book is really good. The characters really start to shine! Embracing the good, bad, and ugly of what they are up against.

David Eddings, a most talented writer, capturing, humorous and a unique way of expressioning situations.