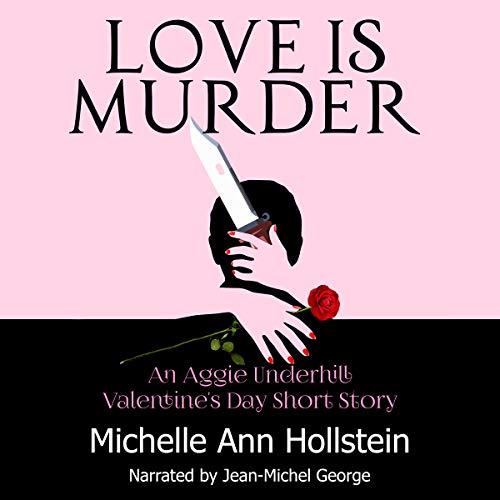 It’s Valentine’s Day, and Aggie is looking forward to her yearly ritual of curling up on the couch in front of the television while eating ice cream. However, this year, her friends Betty and Roger have talked Aggie into spending an evening out on the town. Then, to her surprise, Officer Tom Wood had also asked her out.

Wearing a very uncomfortable, slinky red dress Betty picked out for her and a ruby red pocketbook to match, Aggie stumbles into a dangerous Valentine’s Day she’ll never forget.

This is a interesting story with a good plot for a short listen. The well done narration also kept me engaged in the event's unfolding. I would definitely recommend this book for anyone seeking a clean romance with a twist of mystery. I was given a free copy of this book at my request and have voluntarily decided to leave this review.

Such a fun story to listen to! Quick, you can listen on the ride to/from work, during a workout, etc.

I was thoroughly entertained, I had a blast listening to this! Aggie is awesome! I love her character!
This is the first in the series I've listened to, and really loved it. Such quirky, awesome fun.
Writing and narration were just awesome :)

I definitely recommend this one, and I'm off to listen to more in the series! I'm a fan of Aggie!

I was given this free review copy audiobook at my request and have voluntarily left this review.
Please take a moment to click the "YES" ("Helpful") button below if you found this review helpful :) Thank you! :)

I really enjoyed this short story! It had a little bit of everything. Suspense. Romance. Humor. Well written. The narrator has a wonderful voice. There is a bit of music that really rounds things off nicely. I recommend this to anyone that wants a short entertaining listen. I received this for free for an honest review.

Listen to your first mind

Love is Murder is a story that could be taken right out of today's headlines. Aggie gets in over her head again by listening to Roger and his not so safe advice after Tom is called away. The story gets a little hairy at first but we all know Aggie can do just about anything. I loved the narrator and his voices they were perfect. I must say that I adored the music that was written by the narrator Jean-Michel George. I received this audio book per my request and I am voluntarily leaving an honest review of my own volition.

Aggie is just so dang real..who hasn't bought that one sexy dress that you are horribly uncomfortable in. Pull it down to cover the legs..oops the girls are about the pop right out..lol.

Seriously the crazy woman in this book is seriously a nut job and for a minute I thought Aggie might be a goner.

Kept me on the edge of my seat. Well written and thrilling. A great short story.

Aggie Underhill has been talked into wearing a short sexy red dress, more makeup than usual, and spike heels for her Valentine's Day "date" with the handsome Officer Tom Wood. When Tom is called away because of his job, the evening really begins.

I loved the descriptions of Aggie's discomfort with her short, tight dress and the smearing of the bright red lipstick that her cousin, Betty, has loaned her. I found myself trying not to laugh at loud during these scenes, because all women can relate to her dilemma.

When Aggie encounters a distraught woman in the restroom, little does she know how her night will end!

Fun, entertaining, fast-paced and well-written, I definitely will read more books in this series. The narrator does a wonderful job and added a lot to the listen.

I was given the Audible version of this book by the publisher/author and chose to review it.

Quirky Aggie gets into more drama

I love these characters as the drama unfolds in cute and clever ways. Jean-Michel George is amazing as a narrator and Michelle's characters are adorably quirky and fun. I really enjoyed this quick listen and can't wait for more!

I really enjoyed this book. It was over quickly but did not lack in entertainment. The narration was great and kept you entertained. This author did a great job with her characters. This was my first book by this author but definitely will not be my last. I will be looking forward to reading her other books in this series. I was given this free review copy audiobook at my request and have voluntarily left this review.