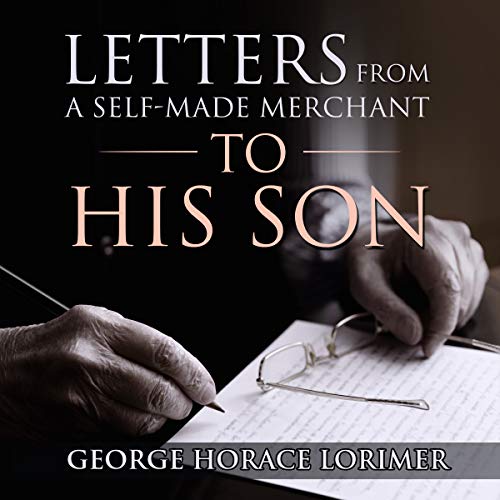 Letters from a Self-Made Merchant to His Son

Letters from a Self-Made Merchant to His Son

George Horace Lorimer was an American journalist and author. He is best known as the editor of The Saturday Evening Post. During his editorial reign, the Post rose from a circulation of several thousand to over a million. He is credited with promoting or discovering a large number of American writers, e.g. Jack London.

Letters from a Self-Made Merchant to His Son has been widely praised and is full of timeless advice everyone can learn from.

Wisdom for the ages

Wise words have value regardless when they are introduced or read.

This is certainly true with this Audio Book which will have value to anyone who reads it.

With a good Narrator you can enjoy the benefits of a man with great understanding of life.


This book was given to me for free at my request and I provided this voluntary review.

A Father’s Advice to His Son

This audiobook is based on the original 1903 work of American journalist, author and former editor of The Saturday Evening Post, George Horace Lorimer.

This (audio)book contains a series of letters written by “John Graham”, the head of the “House of Graham & Company”, a pork-packing business in Chicago, to his son “Pierrepont”.

Letters from a Self-Made Merchant to His Son is full of timeless wisdom on topics like money/wealth, managing employees, education, relationships, marriage, etc. It is obvious that the advice comes from someone older and more seasoned-someone who’s travelled a long way down life’s proverbial road.

By far, my favorite letter is the final one-on marriage. This letter contains some of the best advice I have ever heard on choosing a wife and maintaining a happy marriage. Although the audiobook is overall excellent, I would consider it great if it contained nothing more than this letter.

The narrator was perfect for the content of this audiobook. He sounds exactly the way I would imagine John Graham to sound!

I was provided this audiobook at no charge by the author, publisher and/or narrator in exchange for an unbiased review.